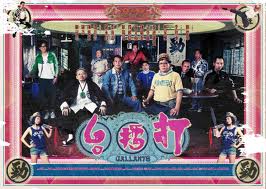 Due to the overrunning of Karate Girl, it’s Q & A (complete with Rina Takeda high-kicking on stage) as well as getting the very large audience – one of the largest of the festival I gather – out of the auditorium and getting the place checked inside, the programme was a tad ruined.

It just meant that the Prince Charles and event organisers had some catching up to do. They did this by starting “Galluant” swiftly after. However, I had been ‘reliably’ (?) informed that due to health & safety &/or other reasons the venue require at least twenty mins between showings.

This was not to be…

Instead, I entered the auditorium, stepped on a film director or two’s toes [so my friend advised – she did the same – and, incidentally I believe Tak Sakaguchi was one of these!] and sat down having missed the first couple of minutes, and perhaps an introduction.

Right. My friend – whose stepping-on-Tak’s-toes-to-get-to-a-seat actions occurred later than mine and therefore probably causing them to re-position slightly and vent any frustration – explained to me that I shouldn’t worry that I’d missed the start, as this was a comedy. I later explained that it doesn’t matter what genre it is I like to see a movie from the very start.

Anyway, something was niggling away whilst I tried to get into this comedy. Was it due to my lack of sleep? A lack of sugar? Food? Or that I’d missed the very beginning?

Believe me, I tried to get into this film. I think, also that a contributing factor may have been that I’d misheard what the synopsis was. I believed it to be a group of fighters from many years ago who were back in the game. This is what I stuck to in my mind when I tried to get into the early scenes.

However, I was constantly confused…I mean, every character was new to others so how indeed could they have met previously? They didn’t appear to remember.

Again, it’s a lighthearted & laugh-out-loud film for those who get it or got it that day. There was many a laugh coming from the whole auditorium.

I’m unsure why I struggled with it. Perhaps it was the amount of slapstick or the fact that I’ve never been overly impressed with films where ‘oldies’ are portrayed as, or act young.

Although I was having some sort of mini mini movie crisis in my head at the time, I can indeed state that the characters were colourful. This said, I got the feeling that this was more of an excuse for an ensemble cast of well-known Hong Kong / Chinese players to be shown in one film.

The references – of ones I could gather, and maybe not know fully – to older pictures, the various genres and old-style camerawork & storytelling were indeed very well done.

Throw in a running joke about a duck-slash-chicken and you have all the markings of a good comedy.

My friend pointed out, whilst the end credits rolled that Jackie Chan had been involved, co-producing I believe.

There was a Q & A with the director afterwards in which it was explained how the idea came about.  He also told us that they had just 5 days to shoot all action scenes!

And…for a comedy, there are many an action scene.

All-in-all, no matter how little attention I was throwing into the movie-watching experience of Galluant, I could tell that all my shying (or ‘chickening’) away wouldn’t change the effect it was having on the audience.

Indeed, this movie was no ‘poultry’ effort and certainly no ‘turkey’… [*sigh*]