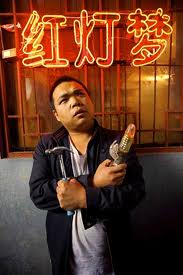 [Note: It was thought appropriate to abridge Mini Mini’s original review to include various updates, including the effect from last year’s riots in the UK, Red Light Revolution’s recent accolades & festivals, mention of this title (and it’s many extras) coming to DVD, as well as tie in with the forthcoming Terracotta Far East Film Festival…yes, for 2012!!]

Upon the ‘Green’ Light… Go!

This film was first up on this, my second day of the festival [the 2011 Terracotta Far East Film Festival…]

The writer/director (Greek/Australian but essentially Oz) introduced this movie, accompanied by a blow up doll. Strange? Well, I’ve seen many a bizarre thing in this life so… errr… no.

Firstly, this film is set and filmed in Beijing in one of the older, small town areas (apparently within one of the main ringroads).

Secondly, it’s filled & fuelled with brilliant humour. I was wondering whether I would have guessed that it was written by a non-Asian or non-Chinese individual if I didn’t already know this. I say that I ‘knew’ this but frankly I only knew that he directed it and not necessarily wrote also, but this was affirmed in the Q & A which would follow.

In the movie, we meet a man who is not having much success lately. Work, relationships & his TV to name but 3 random items. However, all these moments – and they’re all kind of interconnected with one another – are so comedic you fall in love with all whom are involved. His parents are fantastic and have such advice & ‘wisdom’ which you’d expect, to a degree. It’s pretty hilarious whilst honest also.

Spoilers aside, he doesn’t sit on his butt jobless but as any man (or woman) down on their luck needs something to lift his spirits. It’s not long before he is trying to fully pick up the pieces, whether this be by looking for work actively or being offered a ‘chance of a lifetime’. But what kind of lucky chance would this be? Well, it doesn’t take an expert to judge from the film’s title alone that it must include sexual connotations. Albeit not in the ‘red light’ we might associate with (I’m thinking of prostitution), but still connected with such areas.

Around this time there is a great Japanese character introduced who briefly steals a scene or two. And it is ultimately from this introduction that our little hero is given the opportunity he is (NOT necessarily) after. Either way, he needs something to put his mind to and of course earn money from.

With the aid of a girl whom he knows, although who he has not that long known he sets up this business. A business in which the items he is to hopefully sell to the public are very unfamiliar to him…and who could blame him, we’re not talking of Fisher Price items on sale here.

Some very chuckle-enducing scenes or experiments with sex toys ensure, both at this start of his venture and throughout the picture.

We meet very funny locals and regulars – or irregulars – to his new establishment. And, what success story would be one without a threat of closure or the fact that it may not actually succeed…?

An essential part of any such threats is displayed to us by the local ‘Neighbourhood Watch’ guy, although this title is not the same as such a ‘watch’ in the UK.

This brings it’s own comedy, including a scene where the Neighbourhood Watch guy must be stopped or at least stalled from visiting the young man’s establishment. The intended stalling scene is brief but humorous, I hope you’d agree.

[Leading on from the latter, & when our hero and associate are asked about what line of work they are in, the comedy-writer inside me came out. Elaboration? Me? OK. 1) There are balloons on display in the store – I thought there would be a joke where they claim to be a balloon or party shop and had to demonstrate with condoms…Seriously, such an idea would not be out of place in this movie. 2) When asked with what are some shoes to be polished with, I was convinced there would be some kind of lubricating gel displayed &/or applied.]

There is a great scene or two involving a reverse-impotency solution. A solution in more ways than one. One of such scenes also involves the director & writer of the picture in this part of the movie, with funny consequences. So… Cameo…? Word Up…

The fluent director (fluent in Mandarin, it had been previously explained, and of course English;) answered questions on the task of making this movie. A few highlights:

I then wandered off with a newly found friend (from the previous evening) to grab coffee – well, this was to be a long day – and got back to the Prince Charles cinema in time to catch main star, & karate champion Rina finishing up her brief introduction to Karate Girl. You can karate-kick your way over to a review of that one here:

Find this Trailer and other Minier [ok, that’s not a real word in England, but…] Movies here at:

For DVD fans in the UK and fanatics of behind the scene detail, I would recommend checking out the extras (of which there are MANY!) on the Terracotta release. They include:

Further details of Terracotta Distribution and another Asian film favourite, Third Window Films are below. However, before you rush to clickety-click-away I’d like to use this space to mention the recent mindless riots experienced here in the UK. Did you know that these riots caused hundreds of thousands of pounds in damages and loss to our favourite independent film distributors? These are, essentially… Arrow Films, Artifical Eye, The BFI, Crabtree Films, Cine-Asia, Dogwoof Films, Exposure Cinema, Eureka, Kaleidoscope Films, Left Films, Masters of Cinema, Metrodome Films, New Wave Films, Peccadillo Pictures, Revolver Entertainment, Showbox Home Entertainment, Terracotta, Third Window Films and Warp Films.

So, with the latter in mind it is even more important to spread the word virally about these unfortunate vendors. On that note I leave you with these links… all which will, in some way assist in keeping such films to be distributed here in the so-called land of milk & honey.

Thanks for your support… in every way.