(Almost) BreaKing News… from those guys & gals at the Korean Cultural Centre, London.

Yes, in 2012 we had 12 months of 12 film directors. All but one of these directors came over to the UK from SK… However, if you include the London Korean Film Festival we actually had more than 12 come and visit!

2013 is going to be another great year. The KCCUK are showing a film, pretty much every fortnight and each one will feature a certain actor or actress of that ‘quarter’.

The first quarter of 2013 will consist of films featuring Moon So-ri and she will, like the directors last year attend at the end of her films at the KCCUK.

and more specifically on

For all 4 actors, the above will take place and each time will include a Q & A, a chance to meet, chat to and/or grab their autograph.

Not only this, it’s a great chance to learn more about Korean film, the other stars and the wide range of stories & styles which are on display. 2012 alone taught me much more about Korean cinema, it’s titles, directors and actors.

And ‘my’ Baby Makes Three…:

YES.. That’s February 14th.  So, for Valentines Day it’s almost certain that I’ll have a DATE with a movie!
MORE Screenings:  TBA

“The 2013 Korean Film Night is proud to present the work of 4 of Korea’s most versatile Actors with a dynamic selection of screenings throughout the year.”

Actress Moon So-ri is one of Korea’s most recognised female actors with a filmography that is both diverse and wide ranging. Her exceptional talent has long been clear for all to see and as such she has worked with most of Korea’s leading film Directors during her 14 year career.

Her films have also been successful abroad with numerous appearances at film festivals around the globe with many top honours to her name, including the Marcello Mastroianni Award from Venice (2002), Blue Dragon (2004) and Grand Bell Awards (2002). From erotically charged thrillers to comedies, historical dramas and Human Rights films under her belt Moon So-ri is one of Korea’s most captivating cinematic talents.

Well, this will be the most Mini review as… errr… despite even owning this film I’ve still not witnessed it. I could review the cover, poster and whatnot but that’s about it. It is, however Moon So-ri’s debut and a much revered film due in part to the way its story is told and events which are covered.

Perhaps this is Im Sang-soo doing what he does best… The story is there but essentially it’s all in his style, and colours. Such a film containing sexual positions of all kinds could be compared to the Kama Sutra. But, being a tale of love and certain comeuppances I’d rather nickname it as the ‘Karma Suits-ya’.

Being a tale of marriage, loneliness, drunkenness, adoption, family, stale relationships, sex, love and death it has something for everyone.. And something for no-one.

And… with the Thomas Newman “American Beauty” style music in this, plus voyeuristic shots relating to peeping toms, it could at times be “Korean Beauty”. It certainly stars one.

However, with Im Sang-soo at the helm and our central excellent actress being chosen by some of Korea’s leading film directors in general, Moon So-ri could be described as “A Good Directors’ Actress”.

I believe the 150 ish strong audience [a KCCUK full house – for this, the first film of 2013] will testify that this was an affectionate comedy, fuelled with absurd yet apt & amusing scenes. A story which touches on Pregnancy, Presidency and Precision in hairdressing. Yes, a film which can focus on politics, haircutting, the North & South divide, parenthood and even torture, both comically – and even a little tragically – must be a film for all. It also contains the best (double-meaning) use of the phrase, “you sh*tting b*stards”.

Overall, a good filmic advert as to why many Korean films are a ‘cut’ about the rest. 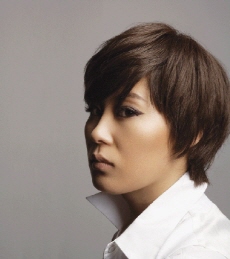