Less than a handful of words there describing this celebratory ‘3-day’ and international event.

But… the below podcast contains many, many words so please give it a listen, if you fancy it.

P. S.  The main reason for this being a REview only, and that no PREview featured on this site is due to the spaces filling up very fast and so it wasn’t deemed necessary.

P. P. S.  I’ve still included full event details in this article, so that you know what you may have missed out on [mwhahahaha ;)…] but also so that you have an idea what could be in store if the event guys run a similar event in the future.  Oh and speaking of the full event details, my (pretty old) mini-review of Gallants can be found here:   https://miniminimovie.com/2011/05/22/terrific-terracotta-iv-gallants-da-lui-toi-打擂台/amp/

NOTE:  As well as MMM’s films, videos and podcasts being found via the below YouTube channel  [just like the podcast itself shown] you can also find the podcasts on iTunes – just search for Jason Verney or…:  https://itunes.apple.com/gh/podcast/f-l-i-c-k-s-the-nnp-mmm-podcast/id1187729244

And here’s all the blurb from the event organisers and indeed their EventBrite event page:

“Creative Visions celebrates the 20th anniversary of the Hong Kong Special Administrative Region by screening Hong Kong films from the past 20 years. London is one of 10 international locations hosting the programme. Over one weekend from 17-19 November 2017, the nine film programme will open with Wilson YIP’s PARADOX, the latest instalment of S.P.L. crime thriller series, and close with THE BRINK, the action packed debut by Jonathan LI (assistant director on the Infernal Affairs trilogy).

18 Nov 2017 (Sat) 15:00
1999 | 128’ | Cantonese | Director: Ann HUI
The Soho Hotel (screening room 2)
 
Master filmmaker Ann HUI’s rarely-seen drama is inspired by true events of a group of idealists who fought defiantly against colonial rule for the rights of boat people and their mainland wives.

18 Nov 2017 (Sat) 17:15
2003 | 88’ | Cantonese | Director: Johnnie TO
The Soho Hotel (screening room 2)
 
Losing his gun to a gang, a Sergeant in the Police Tactical Unit (PTU) and his boss attempt to retrieve it over the course of a night before it kills someone. Johnnie TO regulars Simon YAM and LAM Suet lend depth to a film that turns the simple search for a gun into a complex portrait of the denizens of the underworld.

MADE IN HONG KONG 香港製造

19 Nov 2017 (Sun) 12:00
1997 (restored 2017) | 108’ | Cantonese | Director: Fruit CHAN
The Soho Hotel (screening room 1)
 
MADE IN HONG KONG is the first independent film to emerge since the handover from British rule back to China. This is Hong Kong seen from a new perspective – a world filled with crowded housing estates, fractured families, and ubiquitous crimes, where many people struggle to find meaning in their existence.

ECHOES OF THE RAINBOW  歲月神偷

19 Nov 2017 (Sun) 15:00
2010 | 117’ | Cantonese | Director: Alex Law
The Soho Hotel (screening room 2)
 
Seen through the eyes of an 8 year old boy, director-screenwriter Alex LAW’s largely autobiographical tale is about a loving working-class family in Hong Kong in the late 60’s. LAW registers social changes through their struggles in this affectionate portrait of Hong Kong told with tears and smiles.

19 Nov 2017 (Sun) 18:00* There will now be a complimentary pre-screening drinks and nibbles in the Indigo Room (basement level of Soho Hotel) The film will begin at 18:30.
2016 | 96’ | Cantonese | Directors: Frank HUI, Vicky WONG, Jevons AU
The Soho Hotel (screening room 1)
 
Set before its handover to China in 1997, the city’s booming economy attracts three infamous criminals from China to cross the border to pull off the biggest heist ever. Produced by Johnnie TO and made by three young directors nurtured from his Fresh Wave short film programme.
*HK Film Awards Best Actor Gordon LAM Ka-tung in attendance.

19 Nov 2017 (Sun) 20:00* There will now be a complimentary pre-screening drinks and nibbles in the Indigo Room (basement level of Soho Hotel) The film will begin at 21:00.
2017 | 100’ | Cantonese | Director: Jonathan LI
The Soho Hotel (screening room 1)
 
A flawed cop is determined to catch Shing who has been using fishing boats to smuggle gold. An action-packed debut from Jonathan LI features underwater fights, stormy weather chases, and a moral tale about greed and personal integrity.
*Co-star Gordon LAM Ka-tung in attendance.
SPECIAL EVENT
In Conversation with Gordon LAM Ka-tung
18 Nov 2017 (Sat) 11:30 – 13:00
Nash Lecture Theatre (K2.31), King’s College London, Strand WC2R 2LS
 
As part of Creative Visions: Hong Kong Cinema 1997-2017 we invite audiences to join us in conversation with award-winning Hong Kong star Gordon LAM Ka-tung at a special Q&A hosted by Dr. Victor Fan of King College London’s Film Department. The event will be in Cantonese and English. 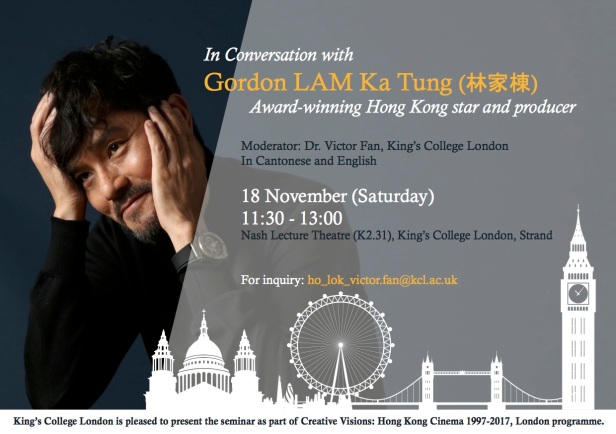