Having established herself on her own, in her own right and with the filmmaking collective, Gwanghwamun Cinema writing and producing feature films, Jeon Go-woon’s directorial debut, “MICROHABITAT” has recently wowed audiences both in the UK and Korea, as well as Internationally.

Microhabitat, both written and directed by Ms Jeon Go-woon concreted her far-from-micro ‘habits’ as an experienced filmmaker, and added to the already existing list of films Go-woon had been involved with – namely, Sunshine Boys, Familyhood, The King Of Jokgu and The Queen Of Crime.

The  accolades and awards for “Microhabitat” speak for themselves, and that is why we’re nicknaming Jeon Go-woon as ‘The Queen Of Cine’!

Hangul Celluloid:  You’ve spoken about the difficulties faced by directors, and especially by female directors, in being able to make films. Was it those difficulties that made you want to creative a collective group of artists to make producing your films easier?

In truth, it’s not like I created this collective because I had difficulty in making films as a female director. It was just a group of students and friends, it just naturally got formed and now we are making films together, so there’s a different chronology.

MyMBuzz:  Miso is such a lovely, selfless person, she wants to take care of everyone around her and all she needs in life is her whiskey, cigarettes and to be with her boyfriend. Why were you interested in featuring a story with someone like her as the lead?

I think that I’m very different to Miso, I’m the sort of person who would give up my tastes and my quality of life in order to maintain my own home. So, I wanted to see the opposite kind of character, someone who is giving up her comfortable place in order to pursue the things she wants to have in her life.

MiniMiniMovie:  I think it was very easy for the audience to define the characters, and who they were, how much of that was in the writing, and did the actors bring things to the characters themselves?

My script was relatively loose intentionally, because I wanted to be open and after I casted the actors I wanted to develop the characters with them.

Hangul Celluloid:  As each of your characters are introduced they are assigned a musical instrument, there’s a feeling that they’re ex-musicians who have moved on with their lives. As an ex-musician Microhabitat resonated with me on a deep level, because of those changes. Why did you personally choose to have ex-musicians be the focus for your characters? Why musicians rather than anything else?

Everyone sort of aspires to be in a band, especially teenagers, because of the energy that comes out of being in a band together. It’s an aspiration that almost everyone has, I wasn’t in a band myself but given the amount of time that people give to this passion, and the fact that they have the most fun playing music together, I thought that being a band could be a symbol of youth.

MyMBuzz:  Something that we don’t often see in cinema in general is men who can be vulnerable on screen, but in your film allthe male characters are going through a hard time. They are upset, and you do see them cry, which is quite refreshing. Why did you want to portray this in your film?

Men, especially in Korea, are almost expected and sort of forced to create this masculinity but they are human as well, perhaps it’s not visible externally, but I witnessed a lot of this weakness and fragility in men behind the scenes, so this was something that I wanted to capture.

MiniMiniMovie:  There were a lot of subtleties in the film, but one scene that wasn’t subtle was the dreamy horror-like sequence with the parents of the lad, but the film still works afterwards. Was that a decision to keep that in and leave it there, or add another scene like that because it was very different to the rest of the film?

I don’t think it was so well calculated from the beginning, I just wanted to create a different situation for each band member and I thought that with this character who was a vocalist. His family situation was the most intense, and in a way directly violent so it just naturally formed in that way.

Hangul Celluloid:  Miso is played by Esom, who I first became aware of when she exploded onto the acting scene in Scarlet Innocence with Jung Woo-sung. How did her casting come about, especially since she’s getting quite big and you’re a first-time director, how did that fit?

I had a relationship with Esom because she was in the third feature made by the Gwanghuamun collective The Queen of Crime, so I already encountered her before I started to make this film. I had a sense that she had a great mind and attitude as an actor, and I admired that. When I shared my script with her she was interested, and I had already built up a trust with her as an actor, so we worked together.

MyMBuzz:  This film will speak to a lot of people around the world, not just Korea. In London, we also have extortionate rent prices, and alcohol and cigarettes also cost a lot of money. Did you expect the film to have such a universal appeal?

I didn’t have any time or energy to consider that at all, making an independent film was extremely difficult task so finishing it was my number one priority, and then I thought maybe I could release it domestically in Korea,which was my second priority. So, no I didn’t have any thoughts on that as I was making the film.

MiniMiniMovie:  With Gwanghuamun Cinema collective, was there a reason that the group was called that? Some of the films that have been made by your group touch on politics and quite serious matters, did the name come about from the area or was there an underlying reason?

It came about out of necessity, we made our first film called The Sunshine Boys with a budget of under £10,000 and it was entered into the Busan Film Festival. I was informed that they needed a name for the production company, so we had to come up with some sort of name, and at the time I was living in Gwanghuamun, and we did a lot of work in this film at my house so that’s why!

Hangul Celluloid:  The character that plays the somewhat overbearing mother of the musician is a hugely famous lady called Lee Yong-nyeo whose been in Park Chan-wook films year after year, like I’m A Cyborg and The Handmaiden and she almost always plays a nutty lady. How much of her character in your film was created because you cast her in the role, how much did she bring to it? And why did you choose her, was it because she always plays these weird characters?

I think when I think about the actors who are in that age group there are very limited choice in Korea so when I formed this character I couldn’t help but think about Lee Yong-nyeo very naturally. No one can replace her, she’s an amazing actor.

MyMBuzz:  This is your feature film debut, were there any challenges that you had to face?

The most challenging part to me is this discrepancy between these two processes in filmmaking, when I write my script it’s the most artistic and creative moment and once that part is done and until you release the film the entire process is the opposite. You kind of become a machine, there’s so much admin so it’s the opposite of being creative, you have to think of all the practical bullshit, so to me this discrepancy was difficult.

MiniMiniMovie:  There’s a lot of steps in this film, literally. The apartments that she goes to in the cheap area of Seoul are at the top of a lot of steps, and when we see her leaving her apartment we’re looking up at her as she’s on the stairs and you can see a conglomerate building behind her. Was this intentional, is there a bigger purpose to these scenes?

I mean the special contrast between Miso and these high-rise backdrop shows her situation very well. There’s no particular reason for the apartments being at the top of staircases, in Korea the cheap apartments are either below ground level, or it’s very high up and you have to take a lot of stairs to get there. So, when I was looking for a location it was just natural, and that’s how they became the areas that I filmed in.

Hangul Celluloid:  After having watched the film, I’m not as young as I used to be and as a young musician I saw a lot of my friends move on and do the whole family thing. I related to Miso far more than the other characters, and I thought that if there is one character I would be proud to say I was it would be Miso because she stayed true to herself even if it’s through smoking and whiskey. What was your intention to put into general viewers minds about her? You seem to be very supportive of her, was she your favourite character and what did you want viewers to think?

Of course, when you make a film you want your main character to be relatable and to be empathised by audiences, in Korea it was interesting because there were two groups: those who identified with the band members, and the others that identified with Miso.

MyMBuzz:  This film has been screened abroad, did you find the reaction was the same and that it was split between those that related to Miso or her friends?

I have a limited exposure to people’s reaction from outside of Korea, there are comments that I can see online and times that I witnessed it in person but in comparison I don’t quite know as much. But in Korea there were definitely two groups of people, those who thought Miso was great and those who were wondering what was wrong with her! When I screened this film outside of Korea I never witnessed very strong criticism against Miso, obviously they can’t do this in front of me, but in general it seems like foreign audiences are generous to Miso as a character. I’m actually quite used to strong criticism to her choices and lifestyle, so I am still getting used to this love for Miso, I’m not used to it!

MiniMiniMovie:  Talking about whiskey and the character, are you hoping to go to the home of Glenfiddich in Scotland and get a bottle?

I don’t have time to travel to Scotland because I have to go to Paris straight away, but as I was walking around London today I came across this amazing whiskey shop which is almost like a museum. I was so happy, and I bought a bottle of scotch! 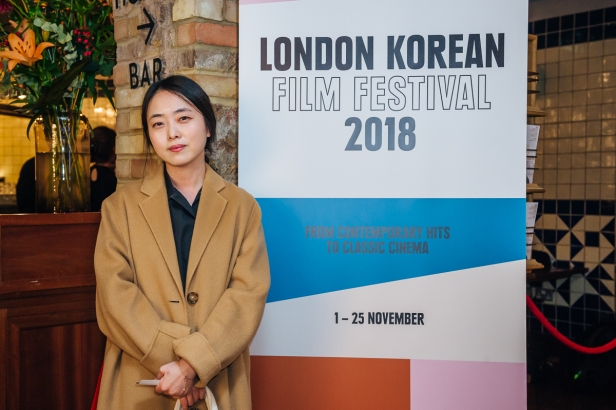 MiniMiniMovie would like to thank KCCUK (Korean Cultural Centre UK) and the LKFF (London Korean Film Festival) for organising the interview and Jeon Go-woon for kindly taking the time to answer our questions.

Note:  Large thanks and praise must be given to Ms Roxy Simons / MyMBuzz (https://www.mymbuzz.com/author/roxy-simons/) for transcribing this interview.