I’d heard good stuff about this film, although probably not much real detail… but that’s how it should be… Right?

However, the day before this Closing Night film screening, a certain “In Conversation” (SEE HERE) session with a film director, Ms Kim Sol (courtesy of the London Korean Film Festival and indeed the Kingston School of Art) had made me even more excited about this LKFF film.

What I hadn’t expected though was the full acting abilities of the main girl actor in the movie, even if it had been touched on and commented about in that aforementioned session with the “Scattered Night” director, or co-director, Kim Sol – after all, she did show us a couple of clips from the feature too!

The girl and actress in question, Moon Seung-a, pretty much holds or commands the story, one could say.  If not due to the fact that she’s in pretty much every scene – except for a handful or so, I guess – but also due to the situation and predicaments being told, or felt, almost from her point of view (or that’s how it felt to me).

Her character is one of two children, and they are brother & sister.  The actor, playing the brother is also great too, I must add.  The 4 main characters all play their roles well, in fact.

These siblings are soon to find themselves in a ‘Brave New World’, not least because any children in this world are constantly maturing young adults, but mainly due to what they are told – early on in the film – and this is that their parents are going separate ways.  Are they just going to being separated though or fully divorced?

Well… Whether they are suggesting that a divorce is coming or simply a separation [I know, I know, even a separation in such an instance is NOT simple!] perhaps it’s unknown or vague throughout the film at first, but the more likely reason here is that I’m leaving it deliberately like that, and unknown to YOU, during this review just to ignite confusion or keep spoilers away!

Yes.  Not only a BRAVE new world is coming, perhaps, but the movie is a BRAVE one also!

It’s surely, though, what some would call “a BRAVE debut” and just as courageous in its subject matter, concerning such a failing relationship and the impact on the youngsters of the family.  Maybe it is even more courageous for a Korean audience as some things (albeit changing all the time in South Korea) are still a ‘no-go area’ or taboo in that society.  A question was definitely raised in this regard during the night’s Q & A with Kim Sol following this very unique LKFF 2019 Closing Night film.

You could say that it’s a BRAVE ‘move’ – not just “movie” – in the way the film is currently being distributed or brought out to the world, with a lot of involvement from those 2 film directors, especially if the words on the KoreanFilm.co.uk site are to be believed, “Distributed by Lee Jihyoung, Kim Sol“.

Despite the sad or downbeat relationship theme, there is light humour smattered about the film, and little or light… errr… actual “LIGHT”… too, and combined with an equally subtle use of camera techniques and colour.

Speaking of LIGHT, it could be such a HEAVY subject and subsequently dealt with in a HEAVY-handed way, but again it’s done so simply and… well… LIGHTly!

There IS a very “BRIGHT” [weather-wise] scene involving a picnic and again a little humour in places during that – or at least this particular London audience found humour in it – and not only concerning a DRONE* being played with by our young ‘heroine’, Ms Moon.  Indeed, the scene is BRIGHT in weather, character and splinters of humour!

*That DRONE does feature quite HEAVILY in the film and not just by Moon Seung-a’s character but also the two siblings in general.

I won’t DRONE on though [*sigh* / *Psy* ? hahaha ㅋㅋㅋ] about this next thing, as it was just an observation, but I will talk a little about the picnic which the 3 characters in this scene have – those 3 characters being the girl and both parents.

I thought it demonstrated a little how South Korean picnics may differ a little to a British picnic, or at least those I may have frequented on this not-so-fair isle of not-so-Great Britain! 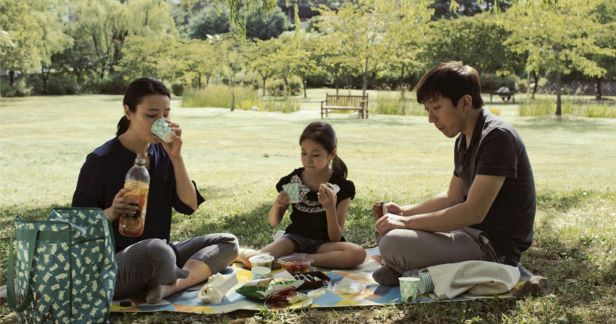 By which I mean, all the saleable snacks you tend to see in the South of Korea, and also ones heavily infused with sugar… not that there’s anything wrong with that… it is a picnic after all and therefore an occasion to be enjoyed and SAVOURED, even if little SAVOURY items are present.

First up?  Choco-Pie?!  Yes… I think so.  Oh and anyone not familiar should be advised that these are quite like our Wagon Wheels in the UK.

Next… Sandwiches… but it would appear, they are the purchased kind – the sort you may find at somewhere like Paris Baguette (?) …

Why would I pay attention to that?  Buddha knows, but I do… or did!  I could go on though, about the drink, and snacks, but I won’t.  I suppose the array was not too different to what other countries would take or have on a picnic but it made me think about Korea.

Back to the plot or story, spoiler-free of course.

With questions being asked, by the two youngsters, and especially actress Miss Moon Seung-a, to their parents, as to whom they will live with after the mother and father go separate ways, the same queries are pondered upon between those siblings.  What will happen?  Should she / he live with Dad or Mum? Perhaps they can prevent all this from happening?  Etc etc…

Also, just like there is a little scene, quite early on, where the daughter writes or draws but either way rather cleverly suggests all the various scenarios which could occur when the parents go separate ways, I should briefly cover here some of the interaction between mother and daughter, mother and son, dad and daughter, mother & father, and so I’ll touch on just one aspect.

That aspect or factor being the way the father talks to and about his son.  Sure, it seems to be when he’s angry and I’m only going by the subtitles read [as my Korean is not that good!], but the derogatory terms used are not justified, nor at times are the anger outbursts themselves.

With all that in mind, and therefore the various sides of each two-way relationship shown – as well as the way the four of them may interact together, as a whole, and indeed as a family, our ‘main’ young female does direct things to what I would refer to as an integral part of this film’s plot:  Yes, little Miss Moon suggests a little holiday or break away, perhaps in a way to get the family back together or prevent the adults from parting.

This is all very touching and towards the very end of the film even more touching, to Mr MiniMiniMovie at least.

You see, and without spoiling, there is a point near the end of the film where one of the children – or is it BOTH, ultimately?! – are being looked for by these parents and its at this point the film became most sweet. 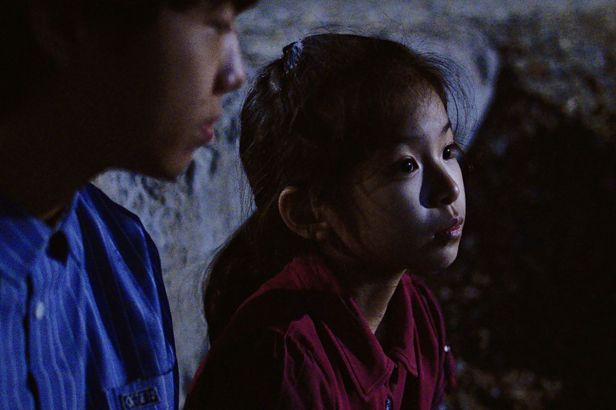 Why?  Well [and perhaps a potential ending for the film would have been this way which I’ll now describe], whilst the two siblings are ‘lost’ but maybe far from lonely – well, they have one another for sure – I imagined them hiding in the green area where we see them at this point (this being towards the end of the film’s running time) and one turning to the other and whispering something like:

“Let’s make mum & dad look for us both for a little while longer” OR “Let us enjoy this valuable time, and one of the last moments we could have together as playful siblings, together, alone”.

Of course, I’m putting words into the two youngsters mouths there, but that’s what you get when you have a film reviewer like yours truly writing about a movie, but who, himself, is also a film-maker and script-writer too!

On that note though, I will conclude that I could not have done a better job than directors Ms LEE and Ms KIM.  Well done!!

Yes.  It may be called “Scattered Night”, but it’s a very Solid Film! 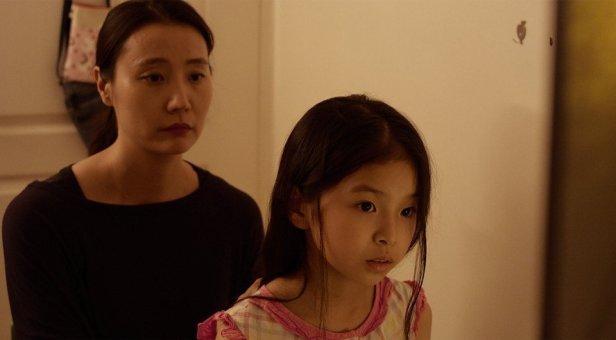