(I was going to make word-play from “Artificial Eye – Let’s…” and “Archipelago / Is-lets” but I couldn’t quite achieve it. Well, I am no Stephen Fry)

If I told you this film begins with a helicopter landing you’d probably picture some Bruckheimer Blockbuster.

How wrong you would be.

For a change, let’s begin with a bit about the director – and indeed it is just ‘a bit’ as I’ve to admit I knew little about her and know little more now. But her style, and especially the lighting made me want to read up on her following this showing at the Tricycle Theatre’s cinema.

Joanna Hogg’s filming uses extended takes and minimal camera movement…as well as minimal lighting, if Archipelago is something to go by. She also uses a combination of real actors and non-professional actors. See if you can spot who are and those whom are not – you might be surprised…I was.

On being introduced to this movie’s characters and setting, it was – as I mentioned before – the lighting which first grabbed me and perhaps you also. Interior shots where you can only just make out the characters – essentially a select few members of one family – in the scene, are prominent and given this naturalistic feel. Even an off-camera moment is provided on a couple of occasions.

Just when your eyes are a tad pained by any lowlight interior shot they are reopened by a brightly coloured exterior scene or shot. As bright as the latter may be it still looks natural and not like the general 3-point technique has been used. 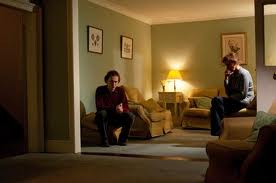 The slow unfolding of this picture goes hand in hand with the (intentionally) dull and realistic tones of colour. It really slowly unfolds and so do the characters & their interactions with one another. Adding to the realism or bleakness of the surroundings is the tranquil landscape of Tresco (Isles of Scilly).

Almost at the same time as being introduced to the family we are shown the maid. She is there to help, prepare food mostly & well, to be a maid!

The slow-movingness of this picture leaves you sitting there wondering where these family members will end up, or indeed go if anywhere…as well as whether the maid and or another non-family member will assist on wherever the journey is going.

Now, I will say how this family and other factors affected me, or how reminiscent this “family away from home” situation is and touched me. Perhaps you’ll have similar connections.

I’ll begin with the type of people we are talking about here as this has been mentioned in write-ups on this film, and in fact Joanna Hogg’s characters in general.

These are obviously middle-classers and perhaps I’m one. I firmly believe that even in one particular class you also get sub-classes. Point in question: This family do in some ways remind me of my childhood but by no means were we rich..but still took similar holidays, albeit not rich destinations.

The maid, Rose (Amy Lloyd) reminded me also of my own family – there is mention of her father having been a racing driver…an accident is quoted…and my father & grandfather also raced, bikes as opposed to cars. And the latter of my ancestors was involved in an accident whilst racing.

Vegetarianism is subjected here in a brief moment…but as much as family members of mine are indeed non-meat eaters, I won’t of course liken us to the characters. Meat was very much a part of our generation’s young life – except that my mother did go through a vegetarian phase…although perhaps that was because of my father…who knows?!

It is clear in this picture that one of the family are vegetarian. Not only vegetarian but also caring in a worldly way. The beliefs of this individual [the son] are clear and sensical.

We can see that any family tension – along with the oh so many ‘world’ problems on this being’s mind all the time – is affecting the son, Edward (Tom Hiddleston) greatly. Albeit, subtle tension is also ever growing throughout the time we spend with the three family members. The fourth member is the father – but we’re never sure if he is going to turn up or not…so, we wait.

Many things and representations can be read from characters or shots in this picture. Here’s just a few of mine and namely about the main male of the movie, Edward.

Edward’s intent on helping the world, beginning (?) with Africa and his empathy with this giant globe is demonstrated as such:

1. His family have a maid for this mini-break. That must cry out ‘selfishness’ or non-awareness of the world’s bigger issues.

2. In the same vain, the family’s meal in a non-cheap restaurant would surely give you angst for those countries who can only dream of such luxuries. Could this add to his reasons for walking out midway through this culinary excursion (family issues aside)?

3. Rose, the maid who physically murders animals prior to cooking for the family – or ‘would’, given half a chance perhaps – is also the opposite of his vegetarian beliefs. This said, there is a nice and almost heartwarming bonding in the kitchen, whilst the pair of them discuss various aspects of cooking and non-cooking. I half-expected a ‘Woody Allen & the lobsters’ moment at one point.

4. Edward mounts his bike but no peddling is required…he just coasts down a path. I like to think that this represents him having to follow (his family in the adventures) wherever he is being taken…whether he likes it all not.

I covered earlier the fact that that Joanna uses a combination of real actors & non-professional actors and I’m unsure if these were but there are two examples of how to ‘cook’ by two different individuals, regarding two different animals. I tell you this as it’s amazing how in-depth these cooking lessons get, for both a lobster and a pheasant. It’s almost an education in murder, of the animal kind.

It wouldn’t be a good enough review if I didn’t mention the character of Christopher, a landscape painter, who is on hand as a kind of spiritual guide. Apart from him perhaps playing an essential part in one or more of this family member’s life and save for me trying to not think of The Fast Show whenever he was at his easel, I renamed him in my mind as ‘Saint’ Christopher.

Lastly, and it was a while before I noticed, there is zero music in the movie (or at least I didn’t notice any) – its stripped bare of all such musical-ness. I guess it’s lyrical-enough without music.

This film may not be for all those of this fragile world, but it is certainly for ones whom feel like they’re one of just many floating islands – or as the film poster word-description analyzes, “a group of scattered islands in a large body of water”. 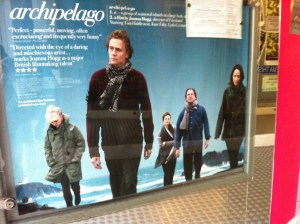