Shown as a short season of films – in the lead up to the Royal Wedding – to promote the Korean island of Jeju.

(despite it’s image, Jeju does not give you that ‘sinking feeling’)

Ironically, this night was the evening where it had finally dawned on me or hit home that I should have possibly taken an 11 day holiday….by just using 3 of my work holiday days. Actually, I already knew that I had the option but due to the indecisiveness of my nature, and the fact that I’d not planned much nothing went ahead. I even briefly considered Korea as a destination this time around. Oh well, at least it will be money saved, for now.

So. I found myself indoors on a lovely (hot…yes, in the UK!) evening, at the Korean Cultural Centre, London…again.

A technical hitch delayed the start [later revealed to be some kind of power-off somewhere]. We sat watching the “No Signal” wording slowly climbing the screen. Hey, if this sounds boring it wasn’t, totally. Why not? As the wording was swapped sides of the screen..left to right ..half way up…

Except, it wasn’t as dramatic start as I make out. It was a very mellow beginning to a film which ultimately felt like it had been made by the Jeju Tourist Board*. Jeju being Korean’s much loved little island and also the reason for this film tonight. You see, Jeju has been nominated as one of the new “Seven Wonders Of The World”. 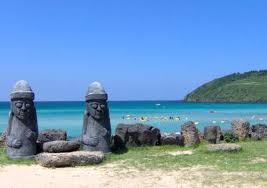 (‘not’ the film’s two main characters…)

A very different film to the previous week’s offering at the KCC but interesting in other ways, even if at times it did feel like it was filmed by the same people who make soap operas – perhaps Korean ones, but I kept envisioning Australian ones, for my sins. [Asia-wise, I’ve witnessed Thai, Vietnamese and Philipino, Chinese & India ones – or at least snippets of, on one’s travels].

I’m not, as you may know, one for giving away entire plots – but I will say that this movie is split into 3.

We have a couple of teenagers enjoying their time together on Jeju having caught a boat to the island. Do they like each other? Well, “perhaps one does and not the other?”, you question. Hmm, well…

In another part of the film, a girl who was previously abandoned by her mother longs to know more about her, if not actually find her. Does she? …

Then we have a woman who is visiting Jeju and searching for her true self. 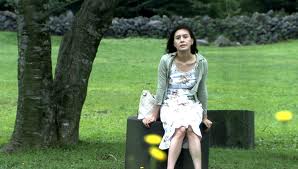 All 3 of these aspects are almost joined together with the idea of a road – perhaps a road on which we are all on, or on a path…a path which runs along the road. Well, that’s one place you’d expect to find a path, isn’t it? [insert sarcasm apology here]

The film has comedy, lovely music (mostly…and the kind I’ve come to expect from so many Korean films), good characters & actors and of course, exquisite shots of Jeju’s scenery.

There’s little else to say, except JeJu looks like a place for J(e)V(ee).

(including details of how to win a trip to Jeju!)