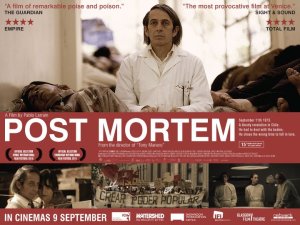 Released & Distributed in the UK by Network Releasing – details here:

The film is the second installment in a trilogy by Pablo Larrain, exploring the political turmoil and violence of post-Allende Chile.

The picture begins feeling like it’s going to be perhaps more art than film throughout.  Don’t get me wrong, it is artistic and arty but  it has the feel right at the start that it’s all about the images we see.

The scene which demonstrates this is one featuring our main character and a window.  It’s very well executed and done so by the use of both the interior and exterior of this dwelling.

What is vaguely on display is an intrigue by this man in one of his neighbours.

Next, a night at the opera scene.  It’s not an opera but anything to try and throw any readers out there.  Basically, a central female ‘star’ – both at this venue and on this movie – is introduced to us.  Indeed, she is in showbusiness.

It’s not long before we are shown our protagonist’s vocation.  This is (more than) hinted at in the movie’s title and other promotional material.  Indeed, he has dealings with the dead and it involves a typewriter.  There ensures a moving image concerning the object of his obsession, which is as misleading as it is intriguing. 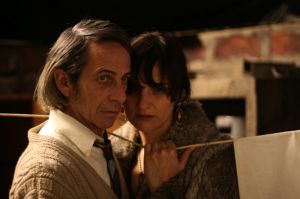 On the outside world, these are dark times.  There is war in Chile and it’s population, complete with protestors or protectors [In the wake of Pinochet’s military coup against socialist president Salvador Allende].  This war interacts with our main characters and pushes the story forth.

Mini Mini Minor Observation:  Prior to this war majorly affecting our showbusiness female and essentially the premises at which she has worked, our protagonist must approach the old-ish long-haired owner.  In doing so, the owner retorts with the following, “Do I ‘look’ like a girl?”  Well, frankly… Yes… I thought.

Perhaps due to the film’s era, setting and style we have touches of the Oriental.  These touches, include clothing, a restaurant, pictures referred to and fleeting passing associations with the Vietnamese culture.  It even comes complete with a pro-Ho Chi Minh anthem.

Sprinkle as much lightness though, as you want on this but it’s essentially about the horrors of war.  There is a classic part in the film which this reviewer thought reflects this horror.  A dog is offered a certain item made from meat but perhaps the animal has witnessed too much death or flesh around it (him/her?!), hence rejects it.  Could this canine be as mortified by all this mass murder as our main characters are?

This is all rounded off with Paste-y faces & Pastel-ly colours and a touch of romance, with sexual tension and release… Even sexual-release, literally.

Yes, do try and see Post Mortem, if its the last thing you do in this life.

Find this Trailer and other Minier [ok, that’s not a real word, but…] Movies here at: