[The sub-heading “IC[A] Dead People…” is, of course a play on the quote from The Sixth Sense…”I see dead people”] 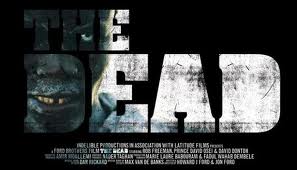 Turmoil abounds somewhere in and above Africa. This is no ordinary ‘war on terror’, but terror exists of another kind.

Soon, a lone soldier appears. He is alone as a result of the aforementioned war and due to a kind of meltdown of territorial machinery and equipment. This is no ordinary soldier… No, I’d rather call him a Modern Male Military Member who Makes Mechanics & Machinery Mended.

The way he is shown to appearing is from the water, but this is no Ursula Andress… Obviously. And, knowing that this is a zombie picture [not my favourite type of film, it has to be said] I thought, “Wow, what a unique take on the zombie genre. We’ve seen many a film where such horror takes place in a confined space, such as in a house… But one set on an island?” Confined, yes. Unsettling, definitely.

But is this an island or a part of Africa, or a fictional island off it’s coast? Either way, I felt it a take on the ‘a man alone but something stirs’ set-up… You’ve all heard the trailer voiceover or seen similar taglines.

So, what do we now know? It’s a man of the military in a land with it’s own problems. This can only lead to trouble… And any hint of trouble is surely given in the form of crop fields. I mean, it’s rare that we see this in many non-horror films but still I let it slide.

There are a few predictable shocks and of course horror & blood. A great example is when a body is knocked almost ‘dead’ (almost, as surely it is already) and if this wasn’t enough the same ‘soul’ is driven over again… Sludge!

Another shock is perhaps the acting. Predictably so, I guess but our main white guy thinks he’s Clint Eastwood. Indeed ‘Clint’ is the mechanic mentioned before. He’s a mechanic with very mechanical acting skills.

Overall, although not a bad take [allegedly the first zombie picture to be set in Africa] on a tried & tested genre & formula, the same has to be said for those doing the acting.

In summary though: A WOULD-be deserted desert with bodies & bones of Balsa-WOOD, fighting WOODEN actors. 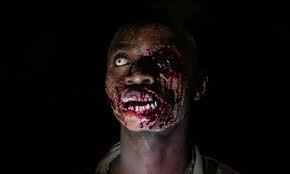 “Shot on location in Burkino Faso this British made love letter to George Romero and Lucio Fulci provides an exciting new take on the zombie movie. With its unusual African setting and handsome 35mm photography it comes on like Lawrence of Arabia meets The Walking Dead by way of Walkabout offering something unique and unsettling.”