Due to the fact that footage of the show, “GUMOK” has now been put online, and with much more of it to follow it seemed appropriate to include links to these clips online.

To give you a bit of background, I was commissioned to film both performances of this wonderful music and so, after grabbing a talented videographer/photographer/friend we proceeded to capture the entire experience, along with rehearsal footage and a lot of other ‘bonus material’ – the musical and the aforementioned clips are gradually being uploaded to my / MMM’s YouTube channel.  I’ve included a couple of YouTube Playlists towards the end of this article… 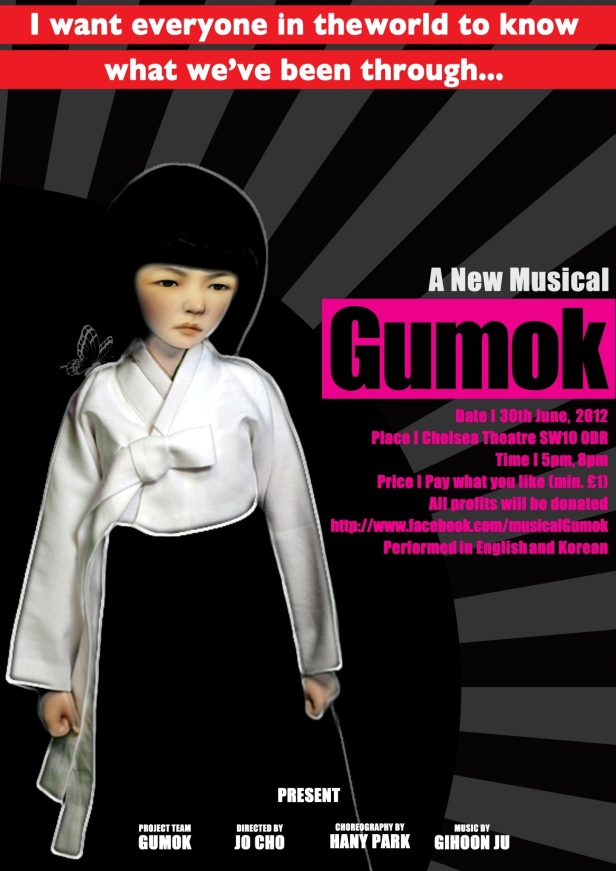 OK, not a good start for a review, preview or an article promoting an event.  But, of course I mean the reason behind this show.

Even the official supporters of this performance tells you enough regarding what it’s in aid of.  After all, these are the ‘Korean Council for the Women Drafted for Military Sexual Slavery by the Japanese’.  A mouthful – I won’t even begin to try and abbreviate it – but it kind of explains all you need to know… but more can be found here:

The site is viewable in both English and Korean – just like the “Gumok” musical itself!

There are 60 women remaining of those affected and it’s a 60 minute show.  Is this number 60 a coincidence?  Perhaps we’ll discover answers to this question and more when Mini Mini attends one, or both (!) of the performances.

Now though… the serious stuff.

(From the Press Release…)

“Gumok” (or 금옥이) is the story of a Korean girl, who was made a victim of sexual slavery by the Japanese Military during the 2nd World War, and is based on a true story.

Project Team Gumok presents a new musical “Gumok” at 5pm and 8pm on 30th June at Chelsea Theatre in London. We hope this show will raise awareness of the atrocities committed against women during the 2nd World War. There were thousands of victims of the Japanese Military, called ‘The Comfort Women’, Chinese, Malaysian, Indonesian, Taiwanese, Dutch but mostly Korean.

Only 60 Korean women are still alive out of the 234 registered as victims and there have been demonstrations in front of the Japanese Embassy in Korea every Wednesday since 1992.

All profits from this show will be donated to the Korean Council for the Women Drafted for Military Sexual Slavery by the Japanese which officially supports “Gumok”.

This show is an experimental piece of musical theatre performed by three female actors. The Running time will be approximately 60 minutes without intermission.

“Gumok” is a collaborative work of Project Team Gumok, a creative group of young Korean artists in the UK and Korea. Jo Cho, director and writer of this piece is a former Korean musical theatre actor, currently a MA student at Arts Educational Schools, London. Gihoon Ju is a composer who studied at the Conservatorio de Santa Cecilia, Italy. And the co-operative choreographer Hany Park is a freelance Korean Traditional dancer and is studying musical theatre in the UK at the moment.

REHEARSAL TIME – A Photo of the Cast: 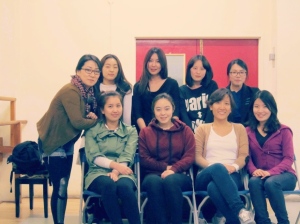 Information:
Date: 30th June
Time: 5pm, 8pm
Price: Pay what you like (min. £1)
All profits will be donated.
Performed in English and Korean.

Find this Trailer and other Mini-er Movies – and now [as of 2021] many clips from the musical itself – here at:

As promised at the start of this [subsequently re-edited/revised] article, here are TWO playlists which relate to both “GUMOK – The Musical” and the subject of ‘Comfort Women’.  These videos are all ones which have been filmed by Mr MMM / Jason Verney over the years.  In fact, if you’re interested in KOREAN CULTURE and/or KOREAN ISSUES the channel has many other playlists…

More videos will be added so feel free to SUBSCRIBE.

Musically I prefer the tune on the end of this Interview with the Director, Jo Cho – watch (and listen) until the end.  If the musical is totally made of such songs I seriously can’t wait!

[You can also find interviews with other casts members via this clip – at www.youtube.com/ActrizJo , and some are posted on the Official “Gumok” Facebook page: www.Facebook.com/musicalGumok]

Lastly, and this is something I discovered just before finalising the article “Gumok” is another example of how social-funding (or crowd funding; crowd sourcing) can work.  For projects that perhaps the big bucks investors, studios or brands wish not to invest in, the general public can fund instead and often receive a reward in doing so.  Much the same as Yoon Jung Lee has achieved with her “Remember O Goddess” film project.