Director / Producer:  [Made for TV]

Official Partners of the Event

Right.  Firstly, I was standing there thinking… that I’m probably 3 times the age of the youngest teenager here. 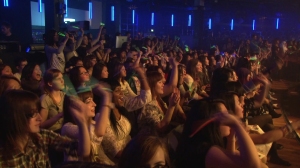 Add to the previous remark the fact that this event (or part of it) goes against much of my music morality.  But hey… When in Rome…

Ok, it’s not ‘Rome’ but far from home.  The continent that is Korea – South or otherwise – is ages away from where I stand at this time.  However, South Korea is currently my LIFE.  It’s taken over pretty quickly but crept up on me over the last couple of years or so.

So much so that I, along with Native Nomad Pictures Limited have embarked on a documentary focusing on Korea & Korean Culture.  Feel free o check out, follow, like or… whatever… the following:   SouthKoreaDocumentary (Facebook); @_dOKumENtARy (Twitter).

Standing behind the TV film & production unit we witness an enthusiastically counting-in or counting-down to the proceedings.  Excitement fills me, and others.

The night begins and within seconds I’m holding back emotion as footage plays.  It’s images of South Korea, their culture and cities.  Indeed, cities and sights it does cite.  And, let’s not forget images & enchanting usage of music.  Beautiful. 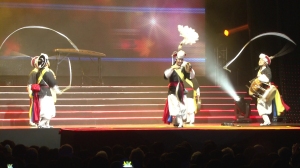 This long, but in no way boring introduction – to oneself at least – is soon over.  It culminated in the rhythmic, dynamic & almost frenzied performance of drumming musicians [apparently, these were members of the ‘SAMULNORI’ Team – and this wouldn’t be the last we see of these guys].

It’s around 4 minutes into the show and so, aptly the girl group, ‘4MINUTE’ play to a screaming crowd.  Ironically, they also play 4 tracks.  This certainly gets those into the mood ‘and them some’, for any who were feeling a little subdued by the epic introduction. 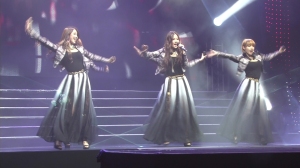 Next up?  A guy with a ribbon, baggy trousers and a love for standing on his hand and hands.  I’d call this a Bboy – if you’re into Korean art, music &/or dance you’ll know about Bboys.

But in contrast to a 1-man display and indeed the style of music heard, we soon have 6 girl band members each with an instrument.  These are known as ‘QUEEN’.  If you’re trying to imagine such a juxtaposition of girls with insruments, think a Korean ‘BOND’ – yes, that classical girl group.  Are they still making music?  Some cynics may say “Were they ever…?”   Whatever the general opinion, we have the use of the following in fromt of our eyes, and ears:

A violin, Korean-style I believe,  a bow thingy…and a flute-like instrument (I would explain which one, but I’m simply not sure, they have many variations.  This include: Tae Ham (big flute); Chung Ham (middle flute); So Ham (small flute); Piri. 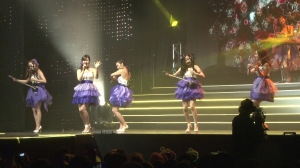 Yes, all “Eyes Are On Korea” and Korean culture right now [Summer 2012 – for 100 days in fact, right into Autumn] and all ears too… Whether this is a true reflection of Korea or not it.  Either way, the majority is loving it!

Did you know all these was going on?  This said, there is always something, somewhere occurring – You only have to look at the the Korean Cultural Centre, London‘s site and London Korean Links‘ calendar to see what I mean!

Anyhow, the singer is soon seen leaving the band of 6, making it… yes, 5.  😉  And so we blend into their 2nd number, a rendition of – or their take on – the known-to-all “Mission Impossible” track.  This is soon followed by another classical tune.  It’s well known… I mean, how else would I know about it?! [ok, I’ll stop putting myself down, I do know lots of lesser known, or obscure musica too].  The name of the piece of music escapes me as I get lost in the night itself.

Another number is soon upon us and this brings back the 6th girl – singer . Sounds like Salt & Pepper’s instrumental rift fro “Push It” – in parts (even though that’s a sample originally anyway).

At this point I look at my watch, and what time is it?

‘QUEEN’ end their medley and set with a medley of many a well known tune… Instrumentally.  Well. tunes which could be said as being just as ‘instrumental ‘ to the whole event! 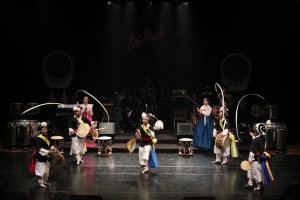 NOW?  NORI!  Well, whether you call them ‘Samul NORI or SamulNORI’ it’s those guys from the first set and they are themselves a TYPE of percussion.   You see, we have here yet another 5 persons complete with ribbons.  They are wearing similar traditional trousers like some other previous individuals… Just the men I believe.  The clothes they wear are in the classic Korean colours:  Blue, red, yellow, black & white.  Picture it if you will.  Male hanboks?  Either way, this, complete with adorning feathers rounds off a nice little act.

So far, not a bad display or variation of Korean music.  From the new to the old, the blue to the bold.  However, it surely wouldn’t be complete without a rendition of “Arirang” being performed.  Well, we now have that and it’s a combo of the 2 previous ensembles. This version starts traditionally slow and is sped up a tad with a fast disco or dancy beat.

Remember the Bboy-come-ribbon man from the start? Well, he reappears… and, soon…

2 girls introduce ‘NORAZO’. 2 guys essentially, I believe.  The other 3 were dancers.   They all come on in football theme clothes, perhaps this is normal for them?  It reminds me of the Russian style [my good friend Israel hinted at this].  Frankly t’s like a Russian group meets the ‘Scooter’ band.  This is no Happy Hardcore though.  Hardcore these guys are… and Happy.  They could be happy that they’re all wearing different coloured shirts, each with “NORAZO KOREA” imprinted on.  The happiest ‘Seoul’ has to be the one with an oversized, colourful whacky hat – think a variation of those Guinness ones we see – and some adorn – on St Patrick’s Day.  Have I mentioned the word ‘Happy’ enough?  Their first song was one called “Happy Song” – That play on words beforehand was purely coincidental, I’m ‘happy’ to say!

I find it ironic that after they perform a song called “Curry” – the iconic ‘English’ dish (!) the band have some English words to speak.  The 2 actual band members (rather than those which may have been considered as just dancers in the set-up) remain on stage.  What do they speak?  They soon announce the song “King Of Sales”, followed by being joined by the 3 male ‘dancers’ of the ensemble.  Their piece culminates – upon their final song, “Superman” – almost frenziedly by that oversized hat being thrown into the audience.

It’s perhaps worth noting that ‘the hat’ could have easily ended up on myself or my friend – Israel – had we taken up the offer put to us after the start of the whole show, of having seats near the front.  However, we were happy being behind the TV monitors, watching the makers – director an’ all – help it all run smoothly for the television channel/s.  Making small talk and occasional laughs with the night’s producer was also a plus point.

A dance routine is followed… the well-established ‘DAEZBAK MOVEMENT’.  Snippets of K-POP hits are heard.

Did we want more dancing?  Apparently, yes!  Another five piece dance ensemble and more.  Well, this time it was actually a dancing competition.  A dance-off perhaps, a mixture of Korean and English dancers competing.

Next?  A display and mini mini fashion show of hanbok dress and beautiful costumes.  Also, some nice housing imagery behind the costume wearers.  I later discovered that much or all of the clothing on show – especially the more unusual or unique – was designed by the pretty famous PARK SUL NYEO! 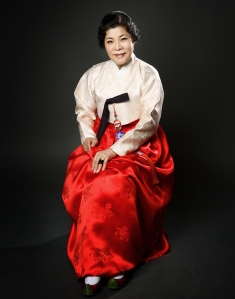 It was now time for one of the comperes to walk on and state a new announcement.  There were screams at this time – although, it’s not as though there hadn’t been any up until now – but not necessarily for the announcer but for (probably) ‘EXO-K’!

What was the announcement though?  That… due to this being ahead of the Olympics it be more than apt to feature a rendition of a quintessentially English song, by (obviously) a British band.  Yes, an operatic version of “Hey Jude”…!

As it very almost hits 21:30, this ‘exhibition’ of musical artis – or perhaps EXPO2 [to similarize it with the well known festival in ‘South’ South Korea] – suddenly turns into EXO2.  Well, that very popular Korean boy band, ‘EXO-K’!

The boys’ first song is “History”, accompanied by a Sequine infused Sequence.

What song is next? Well, spoken words actually.  Yes, a brief intro by the boys as to who they are and of course the generic ‘So happy to be in London’ which every band in the world must say, and have since the start of time!

Enough with the generic spoken words and on with their next track.  It’s called “Angel” and by all accounts their first ‘live’ performance of it anywhere.  Don’t laugh… but it takes me back to ‘BOYZONE’.  No, not because I was a fan… obviously… but perhaps it’s style, their set-up and/or the sound.

As for the set-up of the whole night itself it has been a flowing night, reflecting different Korean musical styles but it seems now after ‘EXO-K’ play the dramatic sounding “Mama” things may be coming to an end for this evening.

It may seem early for the show to draw to a close already but perhaps if it does so on a high note, and judging by the screams received upon that last track it just may have achieved that.  A popular track was that “Mama”?   The yelps and screams said so, as did my ears and what was left of them!

Certainly we saw different styles on tonight, from the manufactured artists to the traditional & fusioned Korean soundings, but (and as one the Koreans in attendance said to me after) maybe not really a true reflection of Korea & it’s music.

Manufactured in its artists maybe or simply manufactured because of TV commissioning, but it still shows people a little something of what’s possible when internationally and a little of “…Thinking Outside the (‘TV’ or ‘Music’) Box”.

It was stated at the start of this night that it was especially to commemorate British Korean War Veterans who fought for South Korea, all those (62) years ago 62 years ago.  In addition to this, all proceeds of will be donated to a fund for the Korean War Veterans, some of whom were seated near the front to witness tonight’s festivities.

The day of the concert was actually 25 June, and therefore marks the anniversary of the start of Korean War.

Lastly, I couldn’t finish this article without giving a shout-out to “I Am LoKo”

Why?  Well, love K-Pop or dislike it their founder and leader Tammy, along with teachers Caroline, Isabelle & Deanna do a sterling job of keeping this little [ok, BIG] strand of Modern Korean Culture in the public’s eye.

These girls and their band of merry women – and men – AND regular meet-ups work so very hard keeping synchronised, choreographed and exercised!  I should know… I spend a whole day in one of their classes – jigging, not dancing.  Here’s Tammy and others at this very MBC event putting on a show…: