Further details of the director, those involved in the making and insights into the film you may look no further than HERE (well, ok you can look elsewhere too!)
*****
Also Mini Mini Movie’s interview with actress, and (voice) star of this film, KIM Kkobbi can be found HERE.
*

This screening was shown as part of the:

A man, a writer of sorts. And his Boss.  A boss who’s a little out of line to that man. This, perhaps naturally and in the ‘wrong hands’, could lead to a knock on effect to one’s behaviour towards a wife… I may be deliberately blurring the two characters whom we meet at the beginning, and who the film ultimately is about.  But I maybe not.

Why would I blur these?  You see, I feel it’s fitting and don’t want to give ‘anything’ away.  It’s fitting in more than one way, but much to the fact that these characters both have their own problems in this, their later lives – we’ll see their earlier lives in not too long from now.  Anyhoo, these two characters are Kyung-Min and Jong-Suk. 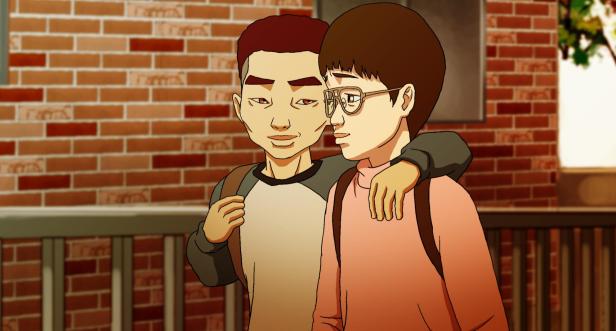 The other blurring I refer to is the ironic use of the actors for Jong-Suk’s young life and then later life.  You see, when we meet Jong-Suk, he’s played by ‘the voice of’ Yang Ik-June – male star of Breathless (똥파리 Ddongpari) – and when we meet his younger self, the voice is that of Kim Kkobbi [star of… errr… “Breathless”]

We soon realise that the film is pretty harsh.  It is almost from the outset and so we already see parallels to Breathless & these similarities, tensions and violences only increase as we go on.

Back to these men, Kyung-Min and Jong-Suk and their current 30-something problems. Now, many of us have been there… We are angry about something and we do (but shouldn’t) take it out on those close to us – Whether this be a spouse, a friend, a colleague.  But why? People say it’s because we’re actually angry with ourselves. Well, one of these men seems to owe money, in addition to other life problems.  That would surely be a sign or cause of self-anger.

The explanation could be found around 15 years before… but you kind of knew that, didn’t you?!  So… A flashback?  Well, I thought as such but this isn’t a flashback where we soon return to the story.  No… We’re back to these ’15 years ago’ for ages!

So… We are in a class. A kid, picked on by others is watched by one of the men from the ‘older’ years. He doesn’t like what he sees. These bullies will always be at this level whilst him and this bully-ee be at the lower level. Is one tier ‘PIGS’ and the other something else?

And so begins a fascinating filmic statement* about bullying, confidence and even power.  Also starts the introduction of a third pivotal character, Chul-Yi. 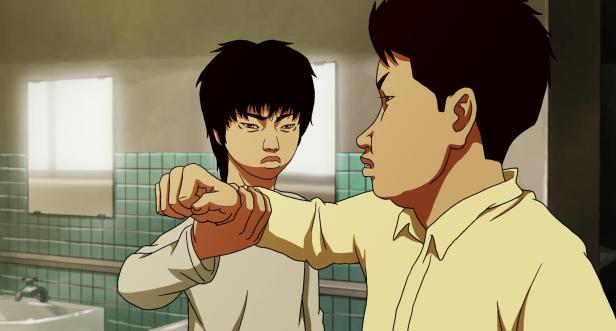 As said in MMM’s review of the Mise en Scène Part 1 there seems to be an almost running theme of both bullying & potential suicide at this London Korean Film Festival 2012.  Well, what with this film, those Mini Mini Mise’s and also “Running Turtles” I think you’d agree if you witnessed them all.

I guess though, from previous years it’s no secret that this festival itself has many – and therefore – deliberate themes, big or small.

*But how should exactly that – well, a statement anyway – be made at this particular time?  Should our ‘hero’ (if that’s what he is) step in?  Will that make matters worse?  Has he got the willpower, or reason even?

This is his school buddy though, as weak as he is… but he also seems to be the opposite to him. This is even hinted at later, or at least I thought so… near the end.  Yes, when we later see these lads as adults he questions why they are friends – Why?  Well, you see back after school had ended they hardly spoke.  Why [again]?   And does he get his answer?  All is kind of revealed but, well, I’m not saying anything!

Whether we’re watching younger years, later years, humans or pigs there is more than enough in this tale to keep one glued.  The acting, animation and general poignant storyline hold things together so well, that you may be tempted to see it a second time around simply for it’s audacity.

Don’t look too hard for any real pigs, but do look out for a dead cat – horrifically deceased – and a bird too, perhaps one representing the other.  The scariest being? Apart from us humans when we’re bad?  Well, yes… it’s a very angry and menacing looking dog early on in the film, which puts both the fear of dog – I mean, god – into our main character and indeed me.

If you missed The King Of Pigs at either the London Korean Film Festival, the Terracotta Touring Festival or anywhere else (including its recent theatrical release) you are in luck – Terracotta Distribution are putting it out on DVD!  Yes.  ‘THE KING OF PIGS’ will be released in the UK on DVD in 2013: 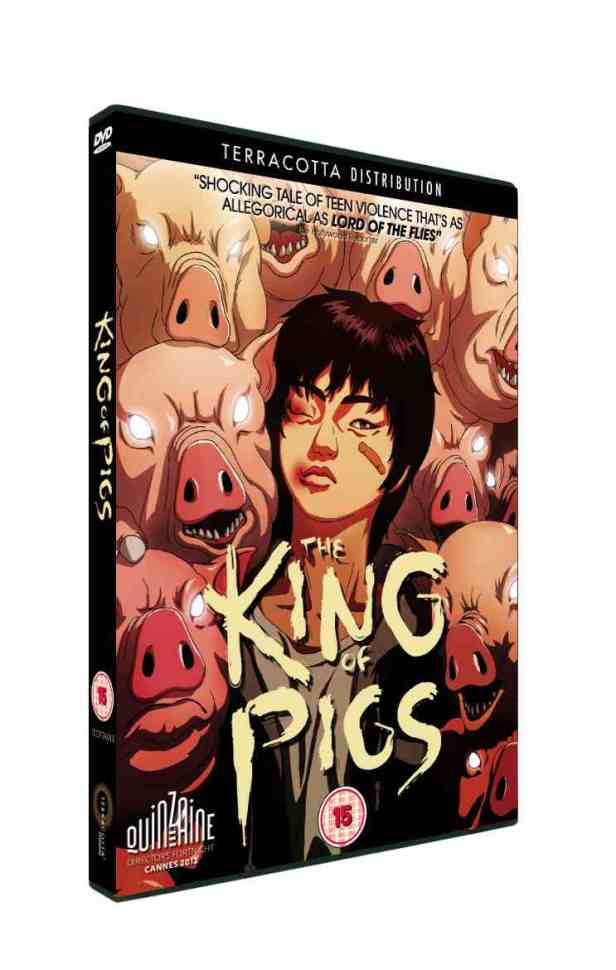 And for anyone who may think that any positive opinions MMM has of this film could be biased, do look at the other reactions from further magazines (online and offline… i.e. paper) and daily newspapers:

“Shocking tale of teen violence that’s as allegorical as Lord of the flies.” – THE HOLLYWOOD REPORTER

* Filks.  A combination of Film and Folks.