I can’t really speak – or write – for Regent Street Cinema* (although I guess I am mentioning them in this article so…) but I certainly can vouch for Asia House as being a pretty good representative for… well… the arts and subjects of Asia. An Asian Art ‘House’, if you will.

Not only that, yours truly has also filmed events there… including one or two of those mentioned.  In addition to this, I was a little surprised when I recently noticed that it’s currently ‘Celebrating 20 Years’!

Speaking of filming, the curator of the Asia House Film Festival 2016 is no other than Jasper Sharp. He’s no stranger to films [I mean, that would be absurd!] or indeed film festivals – remember the recent Zipangu Fests here in the UK?! He has also programmed for London’s Raindance Film Festival (2005-2009), curated a number of high-profile seasons and retrospectives at the British Film Institute (BFI / BFI Southbank) and more.

Indeed, perhaps one of my firsthand experiences of his talent was way back in 2011 when witnessing him co-host the Female Prisoner #701 trilogy [consisting of “Female Prisoner #701: Scorpion”, “Female Convict Scorpion: Jailhouse 41” and “Female Convict #701 Scorpion: Beast Stable”] all-nighter in London (the lovely Rio Cinema in Dalston, London, to be precise). Someday, I may even finish my review of all 3 of those Japanese movies!

Jasper’s knowledge of films is pretty immense, and so much so that he’s written great words on it, including one or two pretty mammoth books on particulater styles of Japanese / Korean / Asian cinema.

There’s a little info on him here:

And the interview which the picture-banner’s wording at the top of this MMM article hints at, is here:

*Regent street cinema is a newly re-opened historical picture-house which promises to give a little prestige to the cinema experience, without being too pricy and at the same time being a non-conglomerate entity or part of a faceless movie theatre chain… At least, as far as I can make out. Their site states it as “The home of repertory cinema in London, featuring double-bills, premieres, arthouse and international films…” and more. I don’t believe I’ve attended any film there but I will say that they currently have FREE MEMBERSHIP, although this is for a limited time accordingly to their site.

There are other venues hosting films of this festival, including the Cinema Museum (Elephant & Castle area – lovely little place, which quite a few well-known people have been to… Mark Kermode, very recently, for one, yours truly [hardly famous though!] and it was the work house where Charlie Chaplin visited as a child… Heard of him?!) and the Ham Yard Theatre, which is within the walls of the Ham Yard Hotel, Soho and is where the Opening Gala Night will be held.

Anyway, enough about venues, the festival runs from 22 FEBRUARY 2016 through to 5 MARCH 2016 and has a total of 19 films from Asia being screened. Prudential plc must be pleased and/or impressed by the mix of 11 feature films, 3 documentaries and 5 shorts, as it’s them who have the privilege of being the festival’s sponsor.

If you add into the mix 6 filmmakers who will participate in Q&As during the festival – Zhang Wei, Diana Ashimova, Steven Dhoedt & Benson Lee (present in person for Q&As) and Yosef Baraki & Lauren Knapp (for Q&As over Skype) – you have the makings for something which not only promises variety but also proves how much work has gone into the lead-up to this one.

I’m down to attend a screening or two, at least and also hoping to meet one of the Q&A peeps, namely the Korean American director (or is Mr Benson Lee officially an American Canadian Korean?)

And if YOU fancy catching a film or two, you can… whilst saving money too. Yes, you may purchase a ‘double-bill’ ticket – actually, you could end up seeing more than two films for that price, as some of the movies include a short before the main feature.

So, what exactly is there to enjoy on the screen?

Well, for starters there’s a prequel to what was a live-action film around 15 years ago! Crazy? Maybe. That sounds like technology and people have changed so much that now individuals have become almost redundant. Indeed, that would be true in this case, if the ORIGINAL CAST weren’t actually IN THIS ‘animated’ prequel. I use inverted commas there as its not 100% animated, but created using that technique seen in, & probably made popular by Richard Linklater’s “Scanner Darkly”.

Then there’s a film by aforementioned director, Benson Lee, known for making documentary AND fiction features. I was intrigued not only by the general setting – plus it’s being described as both as a kind of Asian/Korean homage to “The Breakfast Club”, by John Hughes, whilst also being based upon a true story – but the trailer too. I mean, the trailer features Erasure’s “A Little Respect” (a song which, in itself, and in its own 80’s but clever montage video alludes to ‘Seoul’ in at least one part) especially with the fact that MMM was, and sometimes still is a fan of that 30-year career-strong pop-duo. Yes, Erasure are well and truly still going! Indeed, all of that stuff instantly appealed to me, and fueled my pursuit to quiz the director at the Q&A or an an interview should the opportunity arise. 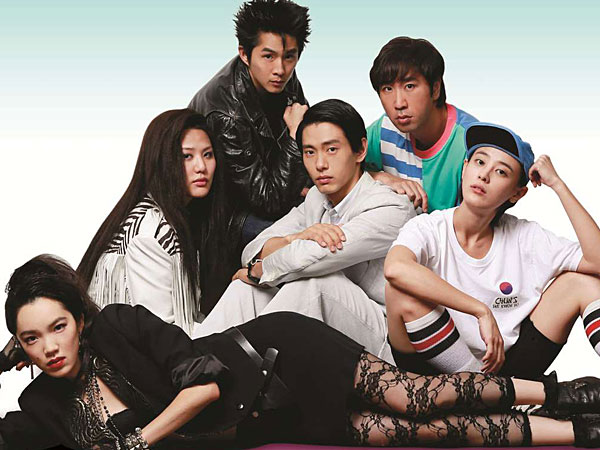 We’ve also got films on show from quite a few varied Asian places – whether this be that the filmmaker is from that country, region, city or other area, or it’s essentially set in that place – and these include: Uzbekistan, Kazakhstan, Armenia, Myanmar, Japan, Mongolia, China and of course South Korea.

Add to this the fact that one of the films [the one being shown on the Opening Gala Night, which is also a European Premiere] is Kazakhstan’s official submission for the Best Foreign-Language Film category at the 88th Academy Awards (OSCARS) for 2016, and you simply have a pretty fabulous line-up.

I think I’ll stop there… If I don’t, I’ll end up finishing this AFTER the festival has ended and that would almost defeat the object!

Therefore, I’ll leave you with a link to the programme as well the official festival trailer.