…is full of interesting strands and one of those is ‘Korean Noir’.

In fact it’s this year’s “Special Focus” – yep… a giant element, a whole section, strand, or ‘focus’ for which the full title is:

Korean Noir, Illuminating the Dark Side of Society” 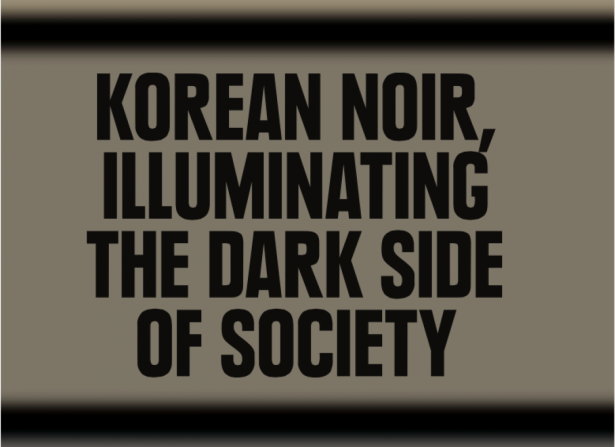 This part of the film festival has some brilliant little, big or grande movies contained within it, and they stretch back to the 1960’s and take us almost right up to date, and 2017.  Not only this, the 16 different events within this focus strand are made of films on their own (classic; new; old), films with Q & A’s, films plus introductions and a film coupled with a masterclass, would you believe it?!

Indeed… As well as 13 films, there is a standalone masterclass and a two-part forum!

I’m going to mention here just 5 of those films, in no particular order.  I’ve semi-randomly taken 5 films – they’re either favourites of mine, quite well revered films, one or two for which I’ve even interviewed the BIG star/BIG director connected to them and/or a movie I’m simply intrigued about.

That’s not to say the others are not interesting – they are, and I’ve witnessed or heard about some also.  Even a few have been recent or classic box office smashes, I believe. 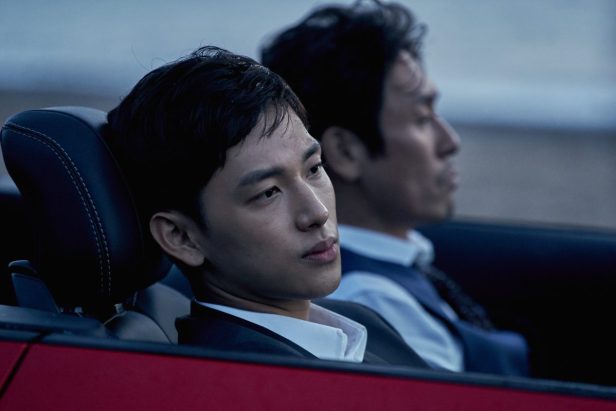 Firstly, we have a film from 1964 and directed by Lee Man-hee… Plus Korean film fountain of knowledge / film director specialist / film writer/author Mr Huh Moonyung will be introducing it for us!

Here are the details of that one:

“Yeon-shil is the loyal mistress of gang boss Dong-il.  In trying to hide her shame – the fact that she had been raped by a violent drug addict – she only compounds her plight. One of Dong-il’s men shows him a compromising photo of her being again attacked by the man who was blackmailing her.  Her punishment is to have a broken bottle slashed across her face.  Disfigured and abandoned, Yeon-shil lives with her assailant and sells herself on the streets.  A swirl of black hair pulled across her once lovely face struggles to mask the emblem of a shame she never deserved.

A world where it is always night-time, grim men roam dark underpasses and tunnels with violence in mind, and a gang boss broods in a grimy basement storeroom;  the Seoul of Lee Man-hee’s noir masterpiece seems partly realistic yet, despite its melodramatic touches, a weirdly abstract subterranean nightmare.”

The second film I’ve picked is:

“Detective Oh Byeong-ho goes searching for the murderer of Yang Dal-su.  Someone has bludgeoned small-time brewer Yang to death by a quiet riverside: no witnesses, no apparent motive.  As lone-wolf Oh wanders about the winter landscape of South Jeolla Province and Seoul, he finds himself caught in a story of treachery, rape and murder.  It all goes back to Yang’s role as leader of an anti-Communist militia that hunted down a desperate band of northern guerrillas in the final days of the Korean War.

Based on a crime novel by Kim Seong-jong, the film tries to pack nearly all of the book into its extended running time.

Dramatic camera angles and off-kilter framing added to the rapid cutting style generate considerable energy.  This style also creates a kind of perceptual anxiety which seems to reflect the growing emotional turmoil of our guide into the labyrinth, detective Oh.”

My third choice is:

“From its big-synth opening chords you know you’re in for a bit of an early 90s treat, whether it’s the conman with a Filofax or sleazy shots of fishnet tights.  In this world of boxy suits and hair scrunchies, a small-town thug travels to Seoul with the intention of joining the most violent and feared of the mobster gangs.  As he struts the streets winding everyone up with absurd braggadocio, there is violence but it reads as stagey and camp, and indeed the main pleasure of this film is its absurdity and period charm – especially when you realise that the reference points are 1930s Hollywood meshed with 1980s TV.

Lead actor Park Joong-hoon is something of a national treasure in South Korea and has been tipped for a starring role in the forthcoming season of local TV hit Bad Guys.”

Now, the 4th film in the few I’ve selected is a bit special, at least in this writer’s eyes, and for the following reasons:

1.  Lee Chang-dong is the director… his style, subject matter and general direction is superb and much loved.  It’s also his directorial film debut.
2.  It features an introduction [yes I know others do, but…] and that introducer is Mr Roger Clarke
3.  In the UK this film was released, at least on DVD, and therefore distributed by those chaps over at Third Window Films – any avid or long term readers of my site will know how much I rate them, as indeed I do their pals over at Terracotta Distribution. The 2 companies have also run the Terracotta Far East Film Festival for quite a few years and also other film nights.

“In 1997 Lee Chang-dong wrote and directed Green Fish.  At the time, it was simply the debut film of an established novelist, but we now know that it also heralded the arrival of a very significant film-maker.

Han Suk-kyu is 26 year-old Makdong, a young man discharged from the military, who, rootless and unsure, becomes involved in the grubby life of a Seoul gangster.  The nearest thing the director ever did to a genre film, Lee’s rare and sophisticated sensibility is already in evidence, as is his ability to find a striking image, deploy a fluid use of camera, and, most of all, get the best performances possible out of his actors.

There are many who regard Lee as South Korea’s greatest living director, and since this is a relatively rare screening in the UK, you should run, not walk, to see it.”

Well…. Another favourite… for these reasons:

1.  It has one of the best starting scenes in any movie, anywhere – the music, the style, the look and the feel.
2.  The fim features actor Ahn Sung-ki who has been in oh so, so, so many films and instantly recognisable to Korean film fans of all ages.  My [group] interview with him can be found here:  https://miniminimovie.com/2014/11/20/ahn-sung-ki-interview-mangala/
3.  The director is Lee Myung-se whose work I admire and in fact here’s an interview I conducted with him when he visited London just a few years ago:  https://miniminimovie.com/2012/02/02/lee-myung-se/

It is, of course… 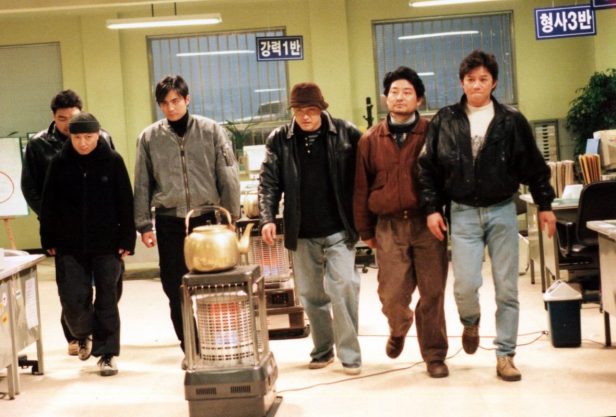 “A detective investigates the murder of a drug boss in this highly stylised violent actioner that saw director Lee Myung-Se, in America at least, marketed as Seoul’s answer to Hong Kong’s John Woo.  It has been cited as an influence on The Matrix.

This is the period in South Korean cinema where directors were gleefully using every trick in the technical playbook – and what the film lacks in narrative cohesion it more than makes up for in extravagant style.  After this genre masterwork Lee spent four years in America unsuccessfully trying to put together an English-language debut.  It never happened, and his career never quite recovered.

Taking place over 72 days often in the pouring rain, this is a police procedural with an all-too familiar cop duo, taking a prime Western slab of noir and slathering it with gochujang.”

So, other than those 5, there are 8 more films, some with a Q&A, a masterclass or introduction.  And, in addition to those films, there is a masterclass with Director LEE Doo-yong and a 2-part forum featuring various curators, directors, moderators and maybe even YOU! 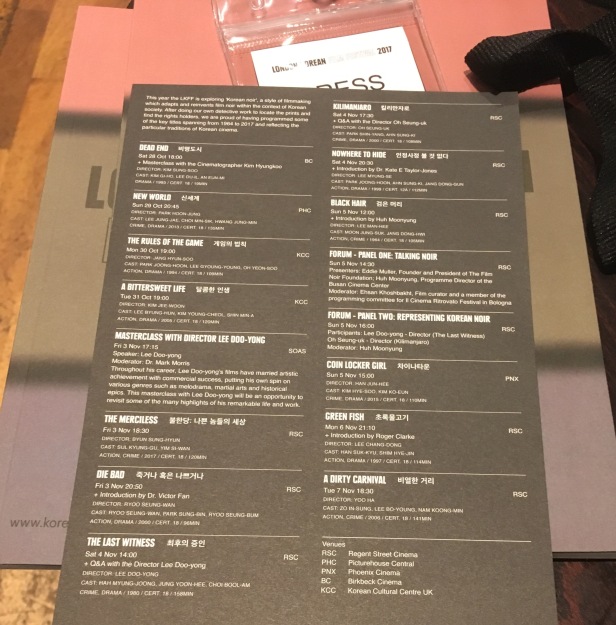 The blurb from the KoreanFilm.co.uk guys:

“Two out of the five Korean hits to grace Cannes Film Festival this year were crime and action thrillers typical of the booming Korean Noir genre, illuminating the dark side of society:  The Villainness (following a female assassin trained from a young age, screening as a special preview at LKFF press launch 11 Sept) and The Merciless (2017, Studiocanal, premiering at LKFF 2017), the latest feature from Byun Sung- hyun, a Tarantino-esque moody neo-noir thriller following double-crossing gangsters.  “South Korea has such a turbulent modern history ridden with violence and political, social upheavals… I think that may be why we are good at making thriller movies like this,” said Jung Byung-Gil, director of The Villainness” (Daily Mail). It’s fitting that the festival shines a light on the killer genre this year with a full range of crime capers both old and new.

The strand begins with an example of Lee Man-hee’s renowned anti-communist filmmaking, with one of his very early films in the genre, Black Hair (1964), which follows the loyal mistress of a gang boss, whose life takes a horrific turn for the worse after a violent rape is exposed.

We are thrilled to be screening the newly restored The Last Witness (1980) that recently played in Berlin and Busan film festivals, with director Lee Doo-yong in attendance;  the film is based on a crime novel by Kim Seong-jung and follows lone wolf detective Oh Byeong-ho as he goes in search of the murderer of a small time brewer.

Film Noir was thriving in the 1990s, and we’ll celebrate a strong selection from that decade: the darkly humorous Dead End (1993), The Rules of the Game (1994) following small town thugs trying to make it big and Green Fish (1997), the directorial debut by Lee Chang-dong who is now widely regarded as South Korea’s greatest living director.

In America, Director Lee Myung-Se was seen as Seoul’s answer to Hong Kong’s John Woo with his hit, Nowhere to Hide (1999), a highly stylised violent action noir and an influence on The Matrix. 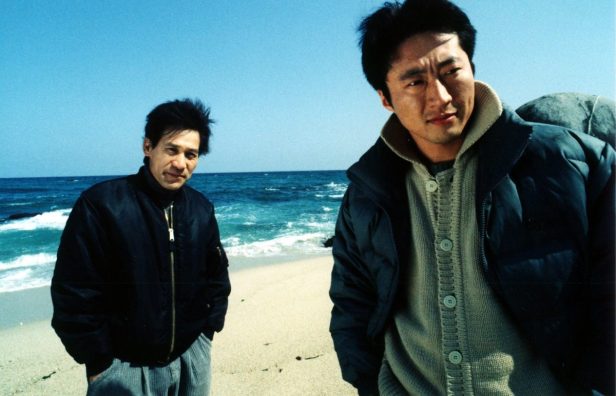 A Bittersweet Life (2005) is Kim Jee-woon’s follow up to A Tale of Two Sisters (2003) a thrilling noir that shows the ultra violent consequences of falling for the wrong girl.  A Dirty Carnival (2006) follows a low-level debt collector as he murders his way to the top, played by one of Korea’s leading actors Zo In-sung.  New World (2013, UK Home Ent. release by Eureka) is the second directorial feature from Park Hoon-jung, the writer behind The Unjust (Ryoo Seung-wan) and I Saw The Devil (Kim Jee-woon), in which undercover cops and shady policemen plot to gain control of Korea’s biggest crime syndicate.  Coin Locker Girl (2015) is a female crime melodrama from first time director Han Jun-Hee starring veteran actress Kim Hye-soo as the psychotic crime boss known as ‘mom’ whose unsavoury trade includes organ trafficking and loan-sharking.”