I would be lying if I said I haven’t seen any of the films being shown in this fabulous new and very special season [and most of them I haven’t!] but I am being very truthful when I say that…

…THIS IS THE NEWS I’VE BEEN WAITING FOR!

Yes.  The London Korean Film Festival has finished… but only JUST.  You see, it finished its touring part of the programme a matter of hours ago really, and I’m sure the organisers, PR people and volunteers are taking a well-earned rest…!

Well, you would think that… but…

They then ANNOUNCE, IMMEDIATELY AFTER the end of the LKFF 2019, by way of a Press Release to yours truly, and others in-depth details of the upcoming season, “Early Korean Cinema: Lost Films from the Japanese Colonial Period”.

I say ‘they then ANNOUNCE’ but technically – and those who paid detailed attention to the bumper LKFF 2019 programme (!) will know this bit already – there was a full, one page advert and therefore announcement inside that giant LKFF programme!

* This article itself is an early announcement but the * is referring to the fact that I Tweet’d, Instagram’d etc about it at the start of November 2018… and it ‘went viral’ on Twitter.  Well, OK, it was ReTweeted several times… and even my self-ReTweet of it was ReTweeted multiple times too! 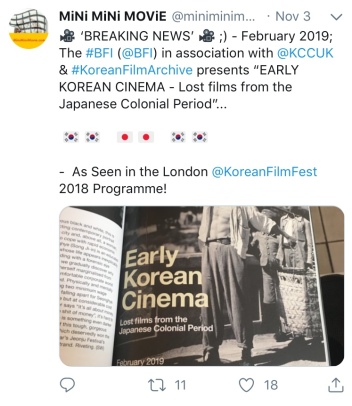 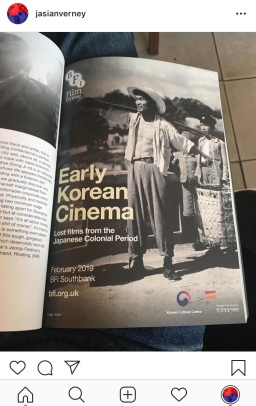 Ever since that page advert I was Googling around and searching the BFI site and elsewhere to find out more information, but came up with nothing, and although I chatted to the LKFF staff practically every day of the festival I didn’t have – or THEY didn’t have… even if I had asked! – time to enquire further about this forthcoming season!

The outcome is that “BFI, KOFA and KCCUK announce archive exchange to mark the centenary of the birth of Korean cinema”.

“In an age where cinema has become more and more a vehicle for escapism over realism, the festival and its Special Focus: ‘A Slice of Everyday Life’ [I actually wrote 3 articles about this brilliant strand]  defied the mainstream and delivered an enormous hit, with multiple sold-out screenings and a sizeable increase in audience attendance.

Building upon this enthusiasm for Korean cinema, BFI and KCCUK are proudly presenting a bold and engaging new programme for 2019 that delves deep into its 100-year-old history, Early Korean Cinema: Lost Films from the Japanese Colonial Period.”

Anyway, it’s certainly a gem of a gem!

And here is some of the blurb, words, news-splurge, Press Release-urgency!

UK audiences for the first time in at

BFI Southbank and the KCCUK in

BFI restorations to show in Korea at KOFA in

Seoul as a cultural exchange this

Tuesday 27 November 2018 – As the 13th edition of the London Korean Film Festival comes to a close, BFI, Korean Film Archive (KOFA) and Korean Cultural Centre UK (KCCUK) announce a new cultural collaboration for audiences in the UK and South Korea to enjoy each other’s film heritage.

Following this exciting festival of diverse Korean cinema, BFI and KCCUK are proudly presenting a bold and engaging new programme that delves deep into its history. Marking the centenary of the first Korean film (made in 1919) each country will present treasures from their respective archives.

In February 2019 BFI Southbank and KCCUK in London will screen every known surviving Korean film made before 1945 – many showing in the UK for the first time – while Korean audiences will be able to see BFI National Archive restorations of classic British films. The programme of 11 British films will include one of Alfred Hitchcock’s finest silent films THE RING (1927) and the BFI’s latest restoration, DISTANT VOICES, STILL LIVES (Terence Davies, 1988), and will screen at the Korean Film Archive (KOFA) in Seoul this December.

BFI Southbank and KCCUK will present ‘Early Korean Cinema: Lost Films from the Japanese Colonial Period’ which will feature all surviving feature length Korean films produced before 1945. This includes Korea’s oldest surviving film, CROSSROADS OF YOUTH 청춘의 십자로 (Ahn Jong-hwa, 1934), which is the only film in the season to have been screened in the UK before. It was once assumed that all Korean cinema pre-1945 had vanished from existence, however following a series of remarkable archival discoveries and the tireless work of the Korean Film Archive 11 feature films have now been recovered and restored to their former glory. The season is co-curated by University of Sheffield Senior Lecturer Kate Taylor-Jones and KCCUK’s Film Curator Hyun Jin Cho and will include a diverse treasure trove of melodramas, propaganda films and newsreels from the colonial period as well as giving audiences the opportunity to learn about the stars, the directors and the politics of this complex and controversial time in Korean history.

The season opens at BFI Southbank on 7 February with CROSSROADS OF YOUTH 청춘의 십자로 (Ahn Jong-hwa, 1934). Audiences will have the opportunity to experience this tale of love, desire, betrayal and revenge on the streets of Seoul as it was first premiered in 1934, with live performances from musicians, a narrator and actors, bringing the work to life.

The majority of the films programmed were made under Japanese occupation (1910 to 1945), and so are products of a complicated and difficult period in Korean history. For example military recruitment films MILITARY TRAIN 군용열차 (Suh Kwang-je, 1938) and VOLUNTEER 지원병 (Anh Seok-young, 1941) are highly inaccurate visions of the colonial experience. However, to just reject these films as nothing more than colonial propaganda would be to dismiss the skills, desires and ambitions of the Korean filmmakers.

Also screening during the season SPRING OF THE KOREAN PENINSULA 반도의 봄 (Lee Byung-il, 1941) offers a fascinating insight into the Korean film industry of the period. The film saw a young filmmaker and his crew struggle to bring the famous Korean story of Chunghyang (the most famous Korean pansori, a traditional narrative song) to the big screen. Torn between two very different women and facing financial ruin, the director makes a rash and foolish choice in order to realise his dreams.

The season offers the best of early melodrama with SWEET DREAM 미몽 (Yang Ju-nam, 1936) and FISHERMAN’S FIRE 어화 (Ahn Chul-yeong, 1938). This double bill sees two very different women set off for the bright lights of Seoul; one bored housewife abandons her family to search for love and excitement and a young woman is seduced away from her small poor fishing village only to be a bar girl (gisaeng) respectively.

The latest film in the programme celebrates Korean independence in 1945 and was the first film made after Japan’s defeat. HURRAH! FOR FREEDOM 자유만세 (Choi In-gyu, 1946) charts the life and death battle that Korean freedom fighters faced under Japanese occupation. Directed by Choi In-gyu who had previously made colonial propaganda films, HURRAH! FOR FREEDOM 자유만세 shows the complex personal and artistic decisions people had to make under colonial occupation.

TUITION 수업료 (Choi In-gyu and Bang Han-joon, 1940) – which depicts the lives of ordinary people facing hardship during difficult economic times – will be previewed at the Independent Cinema Office’s (ICO) Archive Screening Day bringing it to the big screen for the first time in over 70 years. Taking place at BFI Southbank on 29 November, the day will also incorporate screenings, workshops, panels and presentations on how to create transformative archive film events at your venue.

From 8 – 16 December 2018 the Korean Film Archive will screen 11 classic British films restored by the BFI National Archive. Alongside a number of the screenings, BFI and BFI LFF programmer Kate Taylor, will give a short introduction on each title. Additionally, Taylor will give a public presentation on 15 December outlining the work of BFI National Archive to preserve, restore and make accessible British film heritage.

Seminal British films being screened include Ken Russell’s visually stunning adaptation of D. H. Lawrence’s novel WOMEN IN LOVE (1969) and David Lean’s quintessentially British romance BRIEF ENCOUNTER (1945). There will also be a screening of Lean’s earlier film THIS HAPPY BREED (1944) about the lives of an ordinary London family between the two world wars.

The exchange will also give Seoul audiences the chance to see two of Derek Jarman’s most important films with CARAVAGGIO (1986) and WITTGENSTEIN (1993) as well classics from the golden age of British silent cinema such as THE INFORMER (Arthur Robison, 1929) and Anthony Asquith’s debut SHOOTING STARS (1928) a fictional behind-the-scenes glimpse into the early movie industry.

Information about KCCUK, KOFA and BFI:

Since being opened by the Korean Ministry of Culture, Sports and Tourism in January 2008, the KCCUK has presented year-round exhibition programmes, film festivals as well as traditional and contemporary musical performances. From the KCCUK’s central London Location, the institution’s dedicated team work to further develop established cultural projects, introduce new opportunities to expand Korean programmes in the UK and to encourage ongoing cultural exchange.

About the Korean Film Archive

The Korean Film Archive (KOFA), established in 1974, is a public organisation that collects, preserves and provides resources related to film. KOFA operates the Cinematheque KOFA, the Korean Film Museum and the Film Reference Library in the Sangam district of Seoul; it also provides online services to ensure that everyone has access to film history and culture.

At the BFI we support, nurture and promote the art of film, television and the moving image. A charity, funded by Government and earned income, and a distributor of National Lottery funds, we are at the heart of the UK’s fast growing screen industries, protecting the past and shaping their future across the UK. We work in partnership with cultural organisations, government and industry to make this happen. We bring our world-class cultural programmes and unrivalled national collections to audiences everywhere, and promote learning about our art-form and its heritage. We support the future success of film in the UK by nurturing new voices and fresh ideas, enriching independent British film culture, challenging the UK’s screen industries to innovate and defining Britain and its storytellers in the 21st century.

Founded in 1933, the BFI is a registered charity governed by Royal Charter. The BFI Board of Governors is chaired by Josh Berger CBE.