We open on a static shot of a seemingly empty home in which stands a girl, Okju looking around at what little remains there. Apart from what the title tells us about this film, we may wonder if this scene alone is indicating that it’s a film about Okju or the family itself.

After this, a man – presumably her father – is seen calling her to make a move.

Okja’s final expressions as she leaves are not only ones of sadness but they could be seen to be representing that her life is a little like that camera movement, or non-movement… i.e. Static.

The next shot, another static one is of Okju, her Dad [yep, we’ve calling him Dad as you’ll soon find out he is – so, not really a spoiler!] whose name is Byunggi, and Dongju, Okju’s younger brother, who are about to get in their little vehicle, stuffed with belongings, to their next destination. 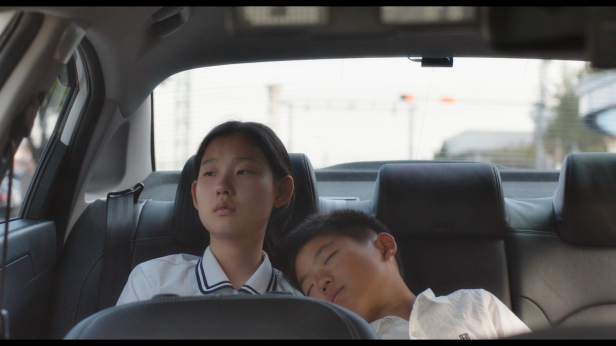 Another static shot follows, but this one is a little different. From the front of the vehicle we see them seated and then… The camera slowly pulls away and so do they. This is when a little discussion begins in which it, or they, tell us where they are headed. They are going to stay with the children’s grandfather, and therefore and assumedly Byunggi’s father.

As we follow the little van from in front of it (so technically, they’re following us?!) we not only pull away a little but also what begins is some beautiful music… an old Korean song and one which is featured on more than one occasion, even if by different artists.

Music such as this plays its part in this film overall. It’s essentially a quiet, non-soundtracked movie, yet when the music is heard it’s both emotional and evoking. In fact, music plays when Okju and little Dongju enter their grandfather’s home for the first time – and on first listen, it reminded MMM of a kind of Thai style tune.

We can all, I’m sure, relate to these siblings and their feelings – be they ones of exploration, uncertainty, inquisitiveness, sadness – when entering a new home. Such feelings would depend on their love and memories from an old abode though. In fact, that very first scene with Okju looking around for the last time in her old home, can I’m sure be related to by many, young or old. 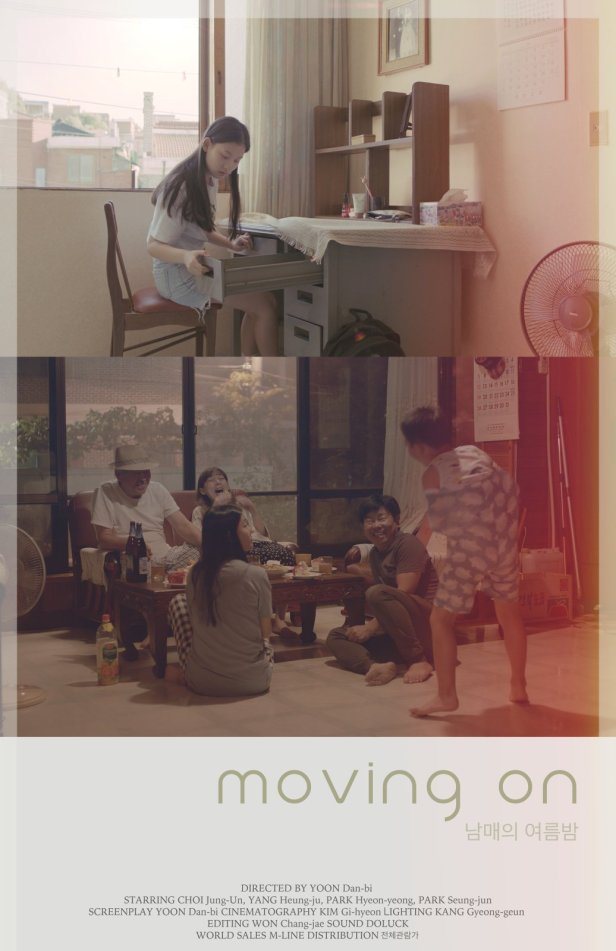 Speaking of old, we are soon introduced to Grandpa himself. He’s not doing too well. Aged and in some ill health it seems. In fact, during one early scene which takes place in a hospital we are introduced to another family member, who also cares deeply for Grandpa… It’s Byunggi’s sister, Mijung (so, the children’s aunt).

Of course, amongst these early scenes we are introduced to an obligatory [at least in many Korean films] eating scene, and therefore vaguely introduced to various Korean dishes.

The eating scenes mostly take place in Grandpa’s home, which has now – temporarily or permanently – become this family’s home. These scenes are dimly lit yet homely and not least due to the wood surroundings, decor and interior itself.

Even the exterior of this rather old Korean home is shown in a beautiful light. Not to mention a beautiful evening scene where the last of the sun, or the sunset is seen whilst Okju rides a newly found bicycle. Dongju follows with a football, or as the subtitles state, “soccer ball”. This is understandable what with Korea having adopted many American terminologies and expressions, namely that football is ‘American Football’ and a normal football is used by soccer players.

On the note of subtitles, I should mention again Mr Darcy Paquet who is mentioned in the film credits, and if we recall correctly it’s regarding the subtitling. MMM has had the pleasure of interviewing Darcy before and myself & others were fortunate enough to meet him at last year’s LKFF 2019… so, in London this time, as opposed to Seoul.

Soon is another well-lit shot or two of the house, and indeed where we see Mijung back on the scene, and “in the scene”… Yes, and she brings home Grandpa.

Over another eating scene [yep!] we have yet more naturalistic dialogue and acting as well as finding out why Mijung is there. Is she escaping something? Is she fed up [obviously she’s being “fed” but…] with a certain situation with another character, and hence her behaviour being a calmer one whilst she’s now with this family?

When the family is not eating or talking, they are sleeping – yes, it’s a normal family and a realistic setting. In fact, the house itself is probably really one of the film’s characters… not least because we spend a lot of time there but due to its somewhat cosy feel, wooden walls and even Okju’s chosen bedroom has a mosquito net covering much of the room, giving perhaps another cosy element to the setting.

This family’s life doesn’t completely revolve around this new home of theirs though. After all, Dad – aka Byunggi – must work and work he does, selling [or trying to sell] footwear mainly.

And even such shoes bring up a little deceit within this family and some would say that the house itself brings similar deceit… especially with regard to deciding what to do with it when Grandpa finally leaves this world. All of which is dealt with very well and so calmly and naturally, at least in relation to how the characters and cast deliver lines and converse – no footwear pun intended!

Some subjects are handled briefly or abruptly whilst also being subtle. There is even a moment when surgery is mentioned in a way which I have not seen in any or many Korean films before – I’m referring to plastic surgery as opposed to any medical one required by Grandpa.

From the youngest family member, Dongju to the eldest, Grandpa the family unit could be what this film is showing us, whether sibling rivalry, or at least sibling bickering (Okju and Dongju) or older siblings (Byunggi and Mijung) getting to terms with life and what hardships it throws at us.

This film is subtly showing us the family unit, the dysfunctional one, some would say. We have a non-present mother, a failing relationship and even one of those tough young love stories comes into play.

But all the time the film is showing this family and its lovely, modest characters we wonder if really the picture is more about Okju.

It’s she who seems to grapple with young love, an unwanted new home, a distant mother, the decision of whether to have her Grandpa moved to some sort of care home, an annoying younger brother and all the things a teenage girl has to cope with.

All this said, the bonds are there. Father and son, grandfather & son, father and children etc etc. There is a little bonding between daughter and aunt too and it would seem that the love this daughter has for her Grandpa may also be more than she first realised.

As the film progresses there are small yet important confrontations, life dilemmas, tears, struggles and scenes of high emotion and poignancy. This would not be one of those brilliant yet quiet Korean films if it didn’t contain all of these components. Yet it makes you smile, wonder and at times cry, maybe when you least expect it.

It’s not hard to see why this film has won awards and impressed audiences.  It’s not showing us anything but real life, complete with the food and some tragedy, and those little moments which make families smile. Having a female director [Yoon Dan-bi] at the helm sweetens the deal too, for this reviewer. Korean cinema is bringing us more and more talented Korean female directors.

The big question could be though, before one goes to see this film or indeed after, is who really is ‘moving on’…?

Is it a father now no longer with his wife, yet coping with two children? Is it Mijung who’s trying to distant herself from a partner or relationship? Is it Okju who could be trying to come to terms with constantly having things ‘moved on’ and new starts on the horizons – be this the home left behind, a boyfriend which may just not be what she thought it would or those tough teenage years in general? Or is it simply all of this as well as an impending moving on of – or from – life for old Grandpa?

One thing is for certain… A divorce or separation effects all those involved and whether Okju, Dongju, their Dad or indeed Grandpa.

The fact that some are calling it a coming-of-age film would indicate who this film is probably about but definitely not exclusively.

The film is certainly touching and no more so when music is heard or quiet scenes involving either Grandpa or of course Okju.

In fact, there is one with both of these characters, albeit not in the same room… All I will say is that it’s Grandpa’s birthday and after much chat from all the family, way into the night, he is seen by Okju listening to a song and we can only imagine or tell that he’s reminiscing.

That’s just one of the scenes which stay with you… or I… or any family.

“Moving On” can be viewed online as part of the LONDON KOREAN FILM FESTIVAL 2020, from 2pm on 2nd November (and is available for a total of 48 hours).