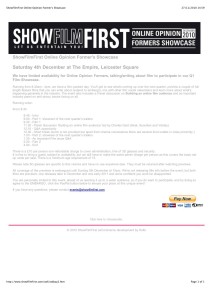 So, the first ‘mystery’ movie preview at the weekend – a part of Show Film First’s special opinion day – was one starring Russell Crowe & other big names…The Next Three Days.

I was unfortunate enough to miss the beginning credits – not because I was late arriving…far from it. The 2 coffees before and during had caused my bowels to crave a THIRD relief since sitting in my seat! Too Much Information? Sorry.

Not a lot can be said for missing the credits except perhaps…I don’t form an opinion (good or bad) if the movie is directed by a certain person but maybe there’s mention of a re-work or the words “based on the book’ are stated. I did the latter with The Social Network – I wasn’t looking forward to it and then saw (or it reminded me from the beginning that..) it was directed by David Fincher. More on David Fincher in a separate blog.

The Next Three Days did nothing to help itself – I mean, the name was as if it was a ‘working title’ which was decided to be used for the RELEASE title. I may be alone with this opinion…but I doubt it.

..Right, so I had missed a minute or so but it was already displaying marks of a film where we were to see all the events which lead the central character to be in the predicament which he or she is in. In this particular movie Mr Crowe is in his car…He’s not happy, and also jaded, wounded & desperate. I could be a clown here and say that this could be a description of the film in ways – but I won’t…honest.

The film ‘got’ started slowly but not necessarily badly, just a tad saccharin-fuelled with it’s ideal family life (you know the kind).

It does make me laugh though because when a movie tries to paint such a perfect picture of a family they get it all right, until you see what the stylist has done to the child star’s hair. I mean, how do they get through a school day without getting beaten up? Perhaps that’s just how kids are over the pond, so I won’t dwell on this. And finally, thankfully the youngster’s character wasn’t named Jason! How many have their been? Its the sole reason for me not turning into a real adult. Jason has been and will always be a child’s name. Violins for moi? Nah

The reason I mentioned the credits is due to this. Around 30 minutes into the movie I recognized the storyline and therefore wondered if the fact that this was a reworking was mentioned in the titles. I don’t believe it was anyway. Hollywood are often reluctant to display if the movie is a remake – that’s not to say that they never do acknowledge such a reworking or remake. They do.

Now, it’s only really in the past year or so that I’ve started to go & see foreign films, mainly for the following reasons: 1. Different technical techniques in both story, storytelling and the tools used to tell it. 2. It gives you access to other countries in the world & what goes on as well as visually (the landscape, cities, countryside etc). 3. Originality.

The latter – originality – stood out on this Mr Crowe vehicle. I thought “hmmm this is too original a story for Hollywood” and indeed I had not long ago seen a film “Anything For Her” (also known as Body Of Lies, I believe), a French movie. I mean, how many movies can there be based around a man having to break a woman out of prison?!

Incidentally, I believe it was through ‘Show Film First’ that I saw Anything For Her. Thanks guys.

More of this subject in a separate article but Apple played a heavy part in product placement in this – and many movies of late.

Without turning this review into a rant and full of negativity, I do have to note a couple of points.

Is it me but did both Mel Gibson & Russell Crowe go to the same mini-course on acting sympathetic? Next time you see them doing a downtrodden, sympathetic look and catch their ‘cow-eyes’ expression does it really do anything for you? Not me…it looks kinda comedic. But hey, that’s just MY opinion…or is it?!

Finally, once I had processed the fact that this was a remake, and far too original an idea to evolve from Hollywood I couldn’t help to ‘look forward’ to the corny ending and ultimately it was, in this lowly filmgoers opinion. I also kept thinking of humorous alternative scenes or one-liners. Therefore, I’ll leave you with this:

After escaping her spouse from prison – or for a better phrase “breaking her out” – Russell is driving her away (but he has one last ‘crazy’ thing to do so…) she decides he’s just a tad more loopy than she remembered him being and forthwith opens the door and flings her top half out the door. This forces him to spin the car around furiously. They stop, they are sitting side by side and he exclaims “you should be locked up..!”

So, the second preview ‘spectacular’ of the day was the much anticipated “Tron: Legacy” even though people were just referring to it as Tron, some people unsure if it was a remake or sequel. It could be looked at as either, to be honest. They’ve set it up nicely and the opening scene looks aptly, cleverly dated or from the time of the original.

Now, I state there are similarities but to be frank I don’t remember the original. In fact, I don’t know if I’ve seen it fully. It definitely wasn’t in the cinema that I saw it. Then again, who needs to have seen it – there was enough hype, clips and trailers for the original. Let’s just say the words “Bikes; Sci-Fi; Amazing/New Special Effects” and yes I’m referring still to the original ‘Tron’.

I’m also not your average lad – I’m not a massive Sci-fi fan nor one who is keen on a movie which has one (pointless / meaningless) fight or chase scene after another. I use the term ‘pointless’ loosely but really to mean that these scenes often don’t drive the story. Adding to this a tad short attention spam held by oneself.

The latter said, I was impressed with the beginning of this new version and this from someone who doesn’t recall seeing the original. I guess, though that the set-up didn’t require much thinking – something often applied (or ‘not’ applied) to most sequels. The music (Daft Funk – who cameo’d in it too, of course) was apt and did the job. The music was over the top (but that’s not to say it was bad, it wasn’t) and complimented the over the top ‘SOUND’ and visuals.

Just a tad note on the 3D…It was not worth wearing the glasses for the amount of 3D there supposedly was, or maybe I wear them incorrectly!!? I never seem to get the feel that is expected from them.

Nonetheless I can see why this film will be enjoyed by many.

Overall, a lovely day out. Such film events always involve chance chats with like-minded individuals. Sometimes they don’t, but more often than not I find that those whom are there are happy to converse, albeit it briefly – if only never to see one another again.

Lastly, the various half-hour or so segments of forthcoming trailers were enjoyable as were the talks. Especially the one on piracy in the movie arena. Nick Moran’s comments were spot on most of the time if a tad blind-sighted to the real world of the public & movie viewing experiences. Plus a quote from a panel-member stating that the average price of a cinema visit being around £6…!? Even if you assume that this relates to Northern counties that hardly an average. In London it’s (expectedly) high but also, from my experience so is it down in Tunbridge Wells and Peterborough to name but two places.

The chat on an online community re: film and reviewing was very light and interesting – it’s funny how the more local (London) things I attend movie-wise the more recognisable names and online groups etc become. E.g. Ultra Culture – I’d heard of them and seen the young lad previously when seeing the incredible Korean movie, “Mother”.

I will say, on a final note that if all these trailers and 2 films of the day were anything to go by – and they definitely are (!) – Hollywood has little to offer currently, except remakes, sequels and the same old rom-coms re-treaded. Seriously, Tron (sequel/remake), The Next Three Days (remake) and think back to all the trailers you saw – for those whom were there. But…