Film: Life, Above All

I’m grateful to The Tricycle for persuading yours truly to see this film. Well ok, not ‘persuade’ but recommend. Plus, who was I to turn down a complimentary viewing.

I’d read little about this and read zero ‘from’ the book on which it is based, that being Chanda’s Secrets.

What I had read was that at Cannes, only a few weeks ago, it had received a record (?) 10 minute standing ovation. Wowzer!

So, now to see if this ovation was justifiable, not that Mini Mini is a big enough name to take on, or argue with Cannes. 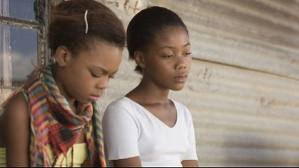 We’re in South Africa… A girl, by the name of Chanda (ironically enough;) is going through all kinds of troubles and even from the start into just a few minutes of the movie, you wonder how life could get any worse for this schoolgirl.

This picture could be thought of as all about community and therefore about your closest friends and neighbours – whom could also be your family. Except for one major flaw in the latter thinking…the word ‘your’. This is far removed from any of you readers from the UK and your lives, no matter how poor, loving or religious you may be. Sure, there will be similarities in lives, but the harrowing story of Chanda and her life are truly unique & upsetting.

Upsetting, her life surely is. Am I talking about robbery, rape, child prostitution, alcoholism, pride or death? A couple of the latter would be enough to be my description without handing out spoilers, so that’s all you’re getting from me.  For now. 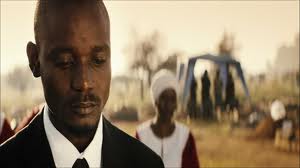 On the lighter side – literally – the colour is realistically, but paint-palette-ly beautiful.

The emotion is portrayed wonderfully too and not just by these actors and their acting talents. Wow though, what acting, especially from the youngsters here.

Emotion not just by the actors?… Of course not, emotions are provided in various guises. Music & setting to name but two. An example (for me) is an almost needed party scene – much needed due to hard-hitting moments which precede it. Anyway, the party…

Any party – anywhere – can often sort things out. Not always but often. And it’s such parties which make me want to visit a place upon seeing them on film. The party on show here was only for a matter of seconds really but enough to make me want to be at that place, no matter how grim the surroundings or events. Party attendees are seen ‘letting go’ in whichever way the choose – for this moment only there troubles are nowhere to be seen. I guess, with myself, having the urge to travel and witness as many cultures & countries as possible helps.

Ultimitely this film has unwatchable subject matter (trials, tribulations & trauma) but told in a watchable way, whilst being poignant and real.

It doesn’t sell out on a Hollywood ending, as such…and why should it? It’s not that kind of picture. But it ends wonderfully… [I’m not saying ‘happily’ or ‘upsettingly’, just ‘wonderfully’…]

As I write up this final segment listening to Ben Harper’s “Amen Omen”, life’s sadness, emotion & gladness rise up through me like they did at the end of this movie. Except there is no such music as the credits begin, just a tear from a nearby member of the audience. That spoke volumes. …

And the girl star’s face, having now disappeared from the screen stays in my memory, reminding me of the tragic tale of true life. 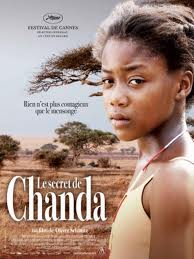 Perhaps I was making comparisons to someone I know and that this may have stirred my emotions, but it wasn’t the ending which touched me but the memories of this central character…even after the end of film.

What more could anyone want… a film from South Africa, about Africans, speaking Northern Sotho… directed by a South African.

Lately, I’ve wanted to see more and more this part of the world…

Find this Trailer and other Minier [ok, that’s not a real word in England, but…] Movies here at: