Let’s start with some non-horrible, vague irony.  The person who was to accompany me in attending this screening had, at one point in our lives been my trainee… But he always states, to this day that I was his boss.  I will add also that I was far from horrible a boss, if perhaps a tad like a fish out of water at times.

So, here I was – yes alone, the aforementioned individual having been running a tad late – and just 4 rows back from the screen.  Ideal?  Hardly.  This was Screen 1 of the Empire, Leicester Square – it’s huge and hence I would have liked to have been a little further back.  My friend’s lateness had reminded me why I attend such screenings alone.  Being alone at a movie preview means no waiting, no stress & no unwanted seating.

Straight into this preview we went.  I started off not enjoying (for various reasons) but relaxed when I received a message to say that my friend had indeed found his way in, and was sitting elsewhere.  Good… No hard feelings.

Kevin Spacey – need I say more?  He is fantastic at whatever role, although I’ve never witnessed him in such an out-and-out comedy, such as this.  Kevin’s character is one of a handful of larger than life personalities in the picture.  I guess they’re all over-the-top but more are exaggerated than others.

The next full-on character is Jennifer Aniston, who stars in working-relationship no.3.  Yes, we are introduced to 3 different sets of characters, all with similar situations.  Jennifer is ‘full-on’ in 3 ways.  1) Again, hers is one of the larger-than-life characters I spoke of.  2) The way she comes-on to a certain individual, persistently.  3) The orange-ness of her skin!  And… Never is this skin brighter than when she has her clothes almost full-off, rather than full-on!  Perhaps that is 4 ways or reasons, but hey… See what you think.

Of course, this being Ms Aniston she indeed plays Jennifer Aniston.  Indeed, most of the time we’ve seen this person’s persona in many a starring role of hers, be that on TV or film.

It was clear that as soon as the crazy storyline/s began, and similarly offbeat situations appeared, this movie is in the same vein as The Hangover.

It does therefore have many a humorous and often hilarious moment.  This said, much of the humour comes through unexpectations [another newly created MiniMini-word?] or the audience being duped to think something else is going to happen and then twisting the forthcoming actions.  This is clever and it does work.  Not only this, it leans towards the once named gross-out comedy, especially in a few of the things spoken.

The latter, I guess is a sign of the times and the way of the world in the movie kingdom these days.  In this ever changing world peoples’ humour glands need pumping and perhaps it could be classed as dumbing down comedy.  Living for the extreme is what many audiences want these days, so it simply gives them that.

Serving the unexpected is nothing new and even when the Zucker brothers (and let’s not forget Abrahams) did it with Airplane! all those years ago it worked, albeit different humour… But new and unexpected, & deadpan it was.

There are some genuine funny lines and characteristics here.  At the same time, is one of the leads attempting to be Steve Carell at times?  He certainly comes out with a screeching voice sometimes too.  I’m referring to Charlie Day… of course.  [I guess it’s worth pointing out the connection here between Carell and one of the other main leads, Jason Sudeikis – correct, they both star in the US version of series The Office.]

Back to Mr Day… It is not to say that his voice is the reason for any annoyance I may have had.  No, I blame this on the venue.

“But, wait a minute Mini Mini… I thought you loved Screen 1 of the Empire in Leicester Square?!”

“Oh, I do… The screen is huge, the soundtrack (especially the music) is fabulous.  I just wish they’d alter the treble a little… A couple of the voices pierced my ears.  Perhaps I’m just a sensitive sole, physically as well as emotionally!”

Anyway, never mind the sound… What the hell is that?  What’s that writing doing on the screen?  Now, I’m not referring to intentional titles which pop-up at certain points… much to the audience surprise and amusement – in fact, some of the biggest laughs come from these, early on in the movie.  No, I’m referring to subtitles which appeared at the foot of the screen…!  At first I thought – and I’m sure others did also – that it was intentional and a part of the comedy, i.e. translation of what the characters were really meaning or thinking when chatting (it’s been done many times before).  This was not to be the case.  Instead these subtitles seemed to belong to an entirely different movie.  Not only that, these subtitles contained words to “Wind Beneath My Wings”… Seriously.  I thought it was karaoke wording at this point  [Luckily, no sign of Ms Midler].  Soon though, someone in charge of this screening (perhaps the projectionist…) realised, stopped the film and restarted.  All was then ok.

All was also ok in the story – in this reviewer’s perhaps warped mini-mini-mind – until a too-sophisticated ‘Satnav’ system shows up in this film.  By this I mean, as far fetched as the story is it’s all somewhat believable – drug takers, hitmen, relationships, work etc.  But a Satnav which knows almost more than you?  Hmmm.

We have a good couple of almost cameo-like roles.  One being a certain black actor and another being Donald Sutherland. What is it with Mr Sutherland these days?  He’s almost a bit part actor now.  I’m thinking “The Eagle” and I’m sure others. Then again, as a recent re-watch of Kate Bush’s “Cloudbusting” video reminded me, he has always undertaken small, as well as larger roles on.  [This remark could perhaps be argued against, because back in ‘the day’ to have a movie actor in your music video spoke volumes about you as an artist, and I guess it still does, even in this age of such music vids]

Anyway, where was I?  Oh yes, in the middle of a small film review.

Leading on from cameos and perhaps onto bizarre roles, are there any Colin Farrell fans out there?  Well’ if you’re expecting his rugged-role-playing you may be in for a surprise.  In fact, think Tom Cruise in Tropic Thunder and you’ll be closer. 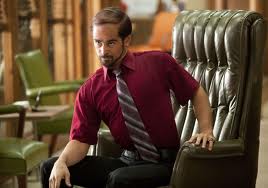 Finally, what kind of extreme comedy would this be without a movie reference or two… But ‘two’ would be putting it mildly… There are references aplenty.  Not only that, there are mix-ups and variations on well-known lines.

I like a good comedy, and although this is not along the same lines as ones I often enjoy, it’s good to see that Hollywood is indeed trying.  Those bosses over in Tinseltown can’t all be horrible.

[A Trailer Link is below]

Find this trailer and other Minier [ok, that’s not a real word in the UK, but…] Movies here at: