Released in the UK by Terracotta Distribution – details here:

Shown as part of the Happy Soul Festival – details here:

“Are You Sitting Comfortably?”… “Then I’ll Begin”… Or rather, I’ll continue. Indeed, this is partly a continuation of this article:

Again… All in all, I suppose the volunteering day had felt a little like my own special movie, and definitely gave me the feel-good factor. Of course, unlike other volunteers who were to make their way home, I had a better idea…

Well, I had been umming & ahhing… Over what?… A chance to see this brilliant Korean movie for a second time… AND catching the main star doing a Q & A (plus perhaps getting a chance to properly meet her).

Having already tweeted Kim Kkobbi to explain that it’s a shame I would miss her ‘again’ [the first time being at the Terracotta film fest – which, even though I’d read that Kim indeed would be signing there I thought it was the main MALE actor… Well, I got the name Kim muddled up with the fact that so many of the Korean actors & characters are named Kim] plus an early finish with the aforementioned Headway volunteering part of my day, meant I ‘could’ now have time to head to Kingston and catch Breathless again plus the Q & A PLUS a chance to meet HER… not Kim the Him!

So, on or around arrival in this part of the suburbs I tweeted the following: “Me, myself & I (@miniminimovies)… in Kingston – My first visit to the place! &… my second visit to a screening of Breathless…”.

Having arrived at the venue one hour before the ETA of the showing, I was fully aware that I hadn’t actually booked or ensured that I would indeed be able to see the film, or meet Kkobbi. The booking was sorted with a quick phonecall to the Happy Soul Festival person/s.

Whilst waiting I grabbed a Coke and a bar snack. Then, not long after 17:30 I wandered back into the Odeon foyer, in search of the duly dressed staff of the Happy Soul Festival. I couldn’t see any but did notice ONE Korean girl awaiting on her own. It did cross my mind at this time that this could be Kkobbi but I wasn’t too sure, so with much courage – and naivity – I said “are you here for Breathless?” and I believe she replied “yes”. I explained how I was looking for the event organisers. She suggested that I ask at the counter, to which I replied that I had previously. On mentions of Breathless she had smirked, and when I asked if she’s seen it & commented that I thought it was good, it finally came out, that… “I’m the star of it”…

I proceeded, flustered like an idiot to chat about my remarks on Twitter etc and before I could go any further the event organisers whisked her away, not before her uttering something along the lines “…but I was speaking with this gentleman…” There was a kind of fleeting promise that she’d be back… [hopefully so that we could chat some more – but this was not to be. They didn’t return, not at least in the next few moments…]

Late, but better than never the film was almost upon us. It was introduced by the one and only Joey L / Terracotta [the man behind the yearly Terracotta Film fest]. OK, it was also/co-introduced by a Happy Soul Festival individual. Khobbi said a few words also.

On introducing this picture, we had been warned of the much violence and many expletives which fill large places in the film. Now, this was my second viewing of the film and some time had passed since that first time – so much time that I had forgotten how much violence & swearing there is in Breathless. Or, perhaps the first time around I just took it as “that’s just the way the film is” but either way I was indeed more aware of it this time.

Incidentally, someone once informed me, following my first viewing all that time ago that it is thought of an Arthouse film in Korea. This is apt because the first time was at London’s ‘house of art’, the Institute Of Contemporary Arts (ICA).

Arthouse or not this is hard-hitting stuff, and hard hitting is what occurs from many fists in this film. Not only fists but from inanimate objects too… especially from our main man. He really would be the ‘main man’ if you needed somebody ‘DONE’!

The fact that this showing was as part of the Happy Soul Festival would indicate to anyone present on this night that such violence & cursing was caused as a result of mental health or illness issues, and perhaps therefore sparked from childhood so many years before.

The standout scene I forever recalled from seeing this film first time around is a moment involved what you could call ‘extreme’ crying. When this scene was upon me this time it didn’t seem as long as that first, but powerful nevertheless. My memories of it were that the two individuals were crying in unison for almost the whole scene, but it’s slightly different to that. My misconception & memory was probably altered due to this moment involving both characters emotions truly connecting and almost entwining.

Either way, long or short, intense or fleeting such a moment will no doubt touch any who haven’t seen this film as yet. Of course, I won’t ‘spoil’ things and tell you when in the picture this happens.

Breathless and it’s intensity & grittiness could be compared to – and I’m sure often is [in the Q & A which followed a member of the audience mention it too] – the Gary Oldman directed film “Nil By Mouth”.

Breathless would be even more reminiscent of Nil By Mouth if Mr Oldman had also played the central character. Yes. You heard / read right – Yang Ik-Jun [or Ik-June] plays the lead, as well as ‘playing’ director and writer. I doubt anyone else could have portrayed his own story, character or character’s personality as well as Yang. 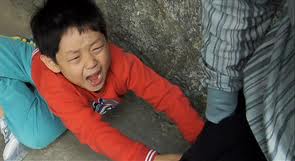 Kkobbi plays her moments intensely also. Anyone who has seen the film will know that her character is as important as Yang’s. Her scenes could be seen as more important than Yang’s, if only for the fact that you realise similarities in his earlier life that are or were in hers. In scenes with her brother and father she shows believable hurt and strength all in one. Her character has definitely not had an easy life – you only need to watch just one scene where she’s interacting with her family, or even just sitting, nonchalant at her school desk.

A good example of this strangely mismatched (and matched) pair working well together is not necessarily a scene where they’re talking but instead they are seen shopping. Minimal music and zero words is all that exists in such scenes. Indeed, no OTT soundtrack song, just a jaded melody… perhaps reflecting their mixed-up heads.

Various ironies between this pair of characters – plus one or two others around them – show themselves to us as the film grows. Ultimately, at the ending we think to ourselves how such ironies have culminated and entwined with one another. I’ll say no more but… Well…

Lastly, a Mini-Mini-Korean-Moment: OK, this isn’t a Korean movie trait but just a similarity in this film and another, that other being “The Housemaid” [original]. If I just mention rat poison and the potential of it being fed to humans… Mmm…

And, partly thanks to the Happy Soul Festival it fills me with happiness when telling you that you’ll not leave a showing of Breathless thinking it Soulless. 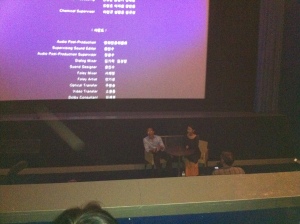 This Question & Answers session was introduced and partly conducted by Mr Joey Leung… of Terracotta Distribution. Kkobbi didn’t really need a translator as her English is pretty good – it was clear from a later interview with myself that Kkobbi is learning all the time and therefore constantly improving.

Note: That interview between Kim Kkobbi & myself will be posted on this site shortly and in that interview all will be revealed about the coincidence, or not about her orange clothing and the Happy Soul logo… See the below photo which I manage to capture as I left the auditorium. 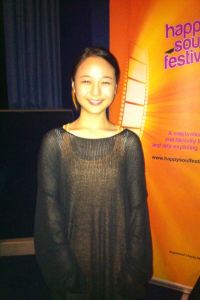 Find this trailer and other Minier [ok, that’s not a real word in the UK, but…] Movies here at:

Lastly, a meet and greet with Kim Kkobbi – on a film she helped to complete:

Want to read my interview with actress KIM Kkobbi??