Headway is the charity that works to improve life after brain injury.

This is a 2 part ‘medicated’ movie review.

Essentially, I try to keep this website solely movie related and in a way this entry is no different. The way it does differ though is that it’s partly about my volunteering visit to Headway, the brain injury association & their daycare centre… and ultimately an excursion for them to the London Eye.  But… even then, it does relate to films in at least one aspect [refer to below mention of one of Headway’s adult’s desires to make a movie].

The first part of this ‘review’ does connect in with the second [mini mini review of “Breathless (똥파리 Ddongpari)”] because both segments are connected to an illness of some kind.

Not only this, most of my movie reviews have a build up – some may call it ‘rambling’ and some are indeed right – and this is no exception.

The morning of Thursday, on the Second of June… Two Thousand & Eleven:

I had opted to be one of three who would reach our everyday workplace at 8am, to assist with transporting lunches by hand to our (first) destination – That destination being Headway House in East London.

Therefore, I woke, met others and then lugged the food-bags across London – via appropriate TFL connections – to the aforementioned Headway House.

We three kings (of foods) arrived at said Headway House, and grouped with another couple of individuals who’d made their own way there.  After a brief complication with the entry system and obtaining such entry ourselves, a guy turned up to go in this area himself and was kind enough to let us in also.

It wasn’t long before we were inside the daycare centre area and being briefed accordingly.  I was – as were others – anxiously anticipating the day’s events and therefore the meeting of those whom we’d be assisting in taking to the London Eye.  Yes, this was their – or a small group of the attendees of the centre – day out and the reason we were on hand.

We were introduced to Cecil, a gentle and aging character, who had, in a way been the one from this centre who suggested or put forward the idea of a visit to the London Eye.  I got the impression that this was a favourite – but rarely frequented – destination of his.  Saying that, for anyone to visit the Eye more than once is often an exception to the rule [albeit this was to be my second trip].

We next met Errol, a colourful and tuneful soul, in a wheelchair.

I’m not going to list all those whom we met but just dabble in vague introductions over the next paragraph or two.

10:30 arrived and so had the coach, an impressive one it has to be said.  It was complete with a hydraulic-actioned lift, and boy are these things pretty amazing.  Once two of the members from the eager party had been lifted on by use of this lifting device, we ensured all were on and took our seats… deliberately spacing ourselves out and seating one another next to a member of the party.

It was suggested I sit next to a sweet girl, named Affiong who was “very chatty”.  I believe they were the words used.  Another lovely human being was she, and it wasn’t long before we were in full swing, conversation-wise.

Affiong is a beautiful name which matches her sweet personality  She talked to me about many things.  These included:

We reached our destination – just outside the London Eye, on the land side of course as opposed to the water.  We all collated various essentials, such as the lunches, bags and one another – we were all gelling into a grand group of friends.

Via amenities, we found a place outside to Lunch, Laugh & Lounge.  It was right beneath the Eye itself… I’m sure you know the area.  One or two of the party wandered off during this time but it seemed they often did such things, but always found their way back.

Next up it was time for those who wanted to catch the 4D London Eye self-promoting film to do so, and those who didn’t, or couldn’t (of which there weren’t many) to wait behind.

The film was over in minutes.  In fact, the best thing about it was the use of a Goldfrapp song.  I think the Coldplay one [as good a band as they are] was a tad overkill.

The Eye.  I will add (again) at this point that it wasn’t the first time for all in this lovely party of peeps.  No, it arose that a handful of these characters had frequented this London Eye-sore on more than one or two occasions.  A perfect example is Affiong, the girl whom I chatted with on the coach.  You see, whilst on there chatting Affiong had mentioned how she’d always take a trip somewhere, if it was free, in a kind of ‘and-I-don’t-care-how-many-times-I’ve-visited-such-a-landmark’ way.  So much so that upon leaving Headway House that morning, a member of Headway had decided to change his mind and actually wanted to come along… As a result, Affiong seemingly almost changed her mind to allow this individual to replace her, but ultimately insisted on visiting the Eye… yet again.  This amused all, as far as I could make out.

Back to the story in hand.  Now, as exciting as this was for some – and I was getting more and more the feeling that quite a few had done this before, not just a handful – and blasé for others, I have to voice my upset & annoyance at the staff of the London Eye &/or the ride-organisers, owners  or sponsors, or whatever:

“What the hell were you thinking?” is almost what I was thinking at the time… ‘you’ referring to the people in charge of the London Eye.  Why?  Well, let me explain.  We had a priority pass, partly due to this visit having been bulk purchased and sponsored by my workplace… And having such a pass means that you don’t have to queue.  Great!  Except, it wasn’t ‘great’. Indeed we could jump to the front of the queue… But… Errr… Wait… a voice told us “Wheelchairs have to go up the long, gradual incline with everyone else”… What?!  So, we would have to let them go separately while the majority (who, remember weren’t wheelchair users) almost immediately took priority access to the front?  Crazy!  We could see access gangways for such wheeled items… But no, we would have to use the long & winding road.  So, like an army of wounded soldiers we all stuck together and headed for this long slog as one.

We therefore had to take a chair with us for one exhausted member… Only to be told, when we reached the top and therefore the capsules themselves, that we couldn’t ‘leave’ that chair there at the top.  I did suggest, jokingly that it could even go in the waste bin which was up there [it was almost big enough to take it and no other options were around].  Eventually, they allowed us to leave the chair with them. 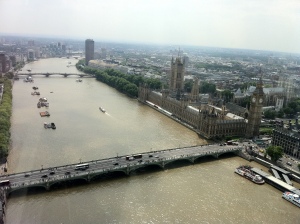 The flight in the capsule?  Lovely.  It was enjoyed by all, complete with obligatory photo-taking, and any ugliness had been put behind those annoyed.  That’s not to say that a letter wouldn’t be winging it’s way to the bosses of the London Eye at some point.

It was soon time to head back to the coach, to Headway House [each of us work members switching seats to sit with another Headway individual – a different one from the inbound journey], to be handed a lovely little goody bag and ultimately make head-way in reaching our homes. 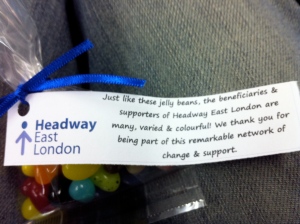 Of course, unlike others who were to be making their way home, I had a better idea… [Link to “Breathless (똥파리 Ddongpari)”:  https://miniminimovie.com/2011/07/24/breathless-two-unhappy-souls-happy-heads-part-ii/ ]

All in all, I suppose this volunteering day had felt a little like my own special movie, and definitely gave me the feel-good factor.