Film:  Bobby Fischer Against The World

Released & Distributed in the UK by Dogwoof – details here (and more at foot of review): 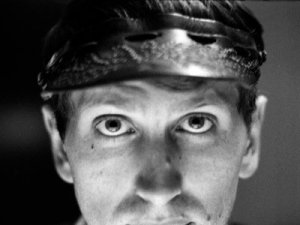 Fingers at the ready…?

We are introduced to a time of many problems in the world and much darkness.  The conflicts in Ireland, Vietnam & it’s war and of course, the Watergate scandal.

Another would be the Russia Vs US saga which dominated headlines around that time.

The latter would be used, both at this time in history and in this film, as an almost analogy for this future American world champion and his battle with board nemesis, and current champion Boris Spassky.

However, this wouldn’t be for a while in his life, as such.

For now, let’s concentrate on his childhood and upbringing. [Of course, I’ll minimalise any spoiling but as with most non-fictional tales, or documentaries like this one that is more difficult to do than fiction films.  Not that describing them without spoilers isn’t hard.  It is.] 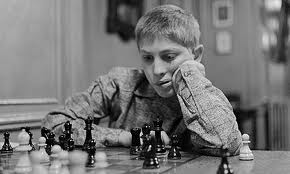 So, this youngster… I recall him being asked at what age he started playing chess.  His response was “…6”.  When then asked “At what age did you get serious [at it]?” young Bobby’s reply was “7”.  It was almost taken like a joke, but deep down the world believed he was being truthful.

Bobby’s upbringing wasn’t easy, or at least it was not easy for Bobby later in life – when a variety of his mother’s talents and controversies were being revealed.  His mother knew many languages, was involved with various political situations and even an activist for all sorts.  Her involvement or connection with the FBI raised many a concern and suspicion, that is for sure.

There were problems with regard to the male parent of Bobby’s but I won’t elaborate on that.

Strangely though – and by way of a great movie shot and close-up – at the age of 15 when Bobby was being interviewed, you could see that although a seemingly normal and probably happy kid his eyes were revealing worry… perhaps foreseeing events in his future…?

Back to the adult-come-chess-superstar, my focus was initially drawn to his collar, rather than his face.  Why?  Immensely large – but the style at the time.  Or one of many styles of that era.  He came across very calm, normal and straight-talking – not really out-going, even if his collar was! 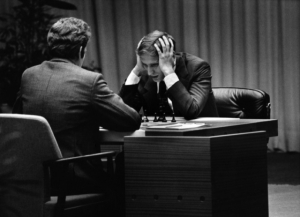 Of course, like all good [or at least the majority of] documentaries, the story leads to a major event… and no prizes for guessing the pinnacle we were headed for.  But to confirm your suspicions, indeed we are leading up to the much-publicised world championship with the aforementioned Boris Spassky.

Would this be plain sailing though?  Doubtful… What would be the point of this docu?  Certainly the tone early on tells us we are building suspensefully, like a chess game itself, you could analogise.

‘Plagued with problems’ would be the (much overused) description for what was to follow.  Yes, from Fischer’s stubborn-ness, almost reculsive-ness, hibernation & general elusiveness to terms not being met… and even the decision of where this tournament would take place.  Incidentally, it was to be Iceland.

Even when the championship games begin, we still wonder if the players are going to turn up… Well, ok just one of the players.  This has to be one of the amusing highlights of this movie, although there are many other moments.

We then have everything from so-called intrusive camera angles, paranoia of cheating or mind games and even suspected murder – murder?  Yes, of two dead flies!  Seriously, you need to see this to believe it.  It’s all rather astonishing.

Add to this the irony and possible terror that this whole match and it’s build-up is almost likened to the America’s simultaneous war with the Russians.  Indeed, this was a real war… with real pawns.

Nonetheless, no matter what motives may be on show here, by the players or important leaders of the world at that time, we’re in for a treat.  The chess games are well documented here in this picture.  Various title cards are used to describe the different stages, each with a chess theme to it.  Not to mention ones titled The Beautiful Game and The All-Nighter.

With all this, it’s hardly a surprise when we learn of these words…”Fischer is to chess what Ali is to boxing.”

The music, animation and use of humour in this motion picture should also be applauded.

All in all, this is a story about a guy with so much focus on chess and chess only that he seems to grow forever embittered. We half want him to fight his inner demons in the time leading up to, and surrounding the all-important chess war-game.

A war-game or not, this film does well to show both sides of Bobby (if indeed there are two!) whilst leaving us movie-goers to witness Bobby & co tuning up to what could be called film’s ‘ultimate battle scenes’.

Following the big tournament we are given a glimpse into Bobby’s later life.  Monsieur Fischer seems to move from paranoia, cult-following, bitterness and an ultimate hate for his homeland of the United States.  With regard to the latter, you could say “Who would blame him?”  Especially after certain events which take place.

What is interesting though is what Bobby states ‘to the world’ after the September 11th tragedy.  It is not nice… But you half-see where he is coming from.

We are shown that Bobby is now living in Iceland [for reasons you can see in the film], the country which held his famous tournament with Boris.  As ironic as this could be seen, he continues to hate the Americans… I found this strange, as he makes himself at home in Iceland, but still dresses like an American!  [Denim-clad top-half and baseball cap etc].

Find this Trailer and other Min-er Movies here at:

As promised above, further details of the distributor of Villain are indeed below.  However, before you rush to clickety-click-away I’d like to use this space to mention the recent mindless riots experienced here in the UK.  Did you know that these riots caused hundreds of thousands of pounds in damages and loss to our favourite independent film distributors? These are, essentially… Arrow Films, Artifical Eye, The BFI, Crabtree Films, Cine-Asia, Dogwoof Films, Exposure Cinema, Eureka, Kaleidoscope Films, Left Films, Masters of Cinema, Metrodome Films, New Wave Films, Peccadillo Pictures, Revolver Entertainment, Showbox Home Entertainment, Terracotta, Third Window Films and Warp Films.

So, with the latter in mind it is even more important to spread the word virally about these unfortunate vendors.  On that note I leave you with these links… all which will, in some way assist in keeping such films to be distributed here in the so-called land of milk & honey.

Many thanks & Love to all, including horses. 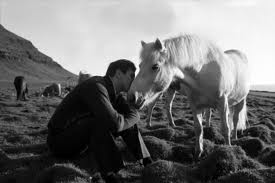 One thought on ““BOBBY FISCHER AGAINST THE WORLD” – Of-Fischer-Ali he was the best.”