[Review Working Title:  A Small Fish in a Small Pond]

Released & Distributed in the UK by Third Window Films – details here (and more at foot of review): 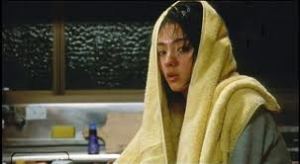 I’m at a bit of a loss as to how to describe the humour in this picture… Sometimes deadpan, dry, subtle and slapstick – but each type really works!

There is even sentimentality, alcoholism & death.  Death… In a Japanese movie?  Never…

Anyway, I’ll remove my sarcastic head for a second or two and describe the film as best I can, spoilers aside.

A girl, Sawako (Hikari Mitsushima) is seen, having a medical procedure of some kind.  Sawako, it evolves is not too bright and takes whatever life throws at her.  We witness this at the beginning in her love life & her working life.

The first real comedy moments are at her workplace, where it would seem that not much work is actually undertaken and at times it’s ‘dull’… This is confirmed by a character or two even using that word – to great comedy effect.

Sawako is also receiving mysterious – to us – phonecalls.  It’s pretty obvious that this is from someone who is, or at some point was close to her.  Is it an ex, family member or perhaps even a company trying to persuade her to come to work with her…?  At this point, we do not know… so why should you?! 😉

The latest love (or just-for-company) interest of Sawako’s brings further comedy to the story.  I will just say that one of the two drinks beer a lot and the other knits clothes, whilst caring for the environment.  You may be surprised which one does what, or of course… not.

Sawako, her male companion & her colleagues are not the only human beings bringing humour to this film.  Another major (but tiny – literally) character is a young child.  Funny, cute & to boot played by a great little actress – one Kira Aihara.

Our female lead must, almost suddenly head of out-of-town in the form of an emergency of the health kind.

In doing so, she becomes a kind of ‘fish’ out of water.  Yes, pun intended… And you’ll get this pun when you see the movie.

You see, not only must Sawako get used to her new surroundings in this out-of-town place but also it means that (yet another) job must commence. A different type of work and more demanding. Is this for Sawako?  Perhaps she really has no choice.

Does she adapt well, after being a fish out of water?  I believe she does a little and becomes a baby ‘duck’ out of water, by this I mean that she, in some small way does indeed adapt but not fully at first.

Incidentally, there is moment where a duck is shown slowly bobbing it’s head under the water and out again.  The motion is repeated a couple of times.  This reminded me of an earlier scene where Sawako is in a bath and her head is seen to splash out of the water.  This said, she’s not the kind to do any ‘ducking’ & diving – no, she’s not known for being a risk-taker. 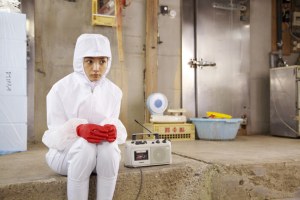 A fish out of water?  A non-risk taker?  So, how does she truly adapt? Let’s put it this way… Sometimes family, and reasons linked to a ‘happy home’ make one try to adapt more.

Up to this point I’ve not mentioned much about her family, and that is essentially because they are unknown to us at the start of the film.  I will say now that one member is sick, whilst another is your almost typical, whilst comedic slightly-perverted-come-randy uncle.

This family of Sawako’s is not only connected by blood but also by that other life-force [for many people], alcohol.  Drinking can make for an easy laugh in a movie, but here it works well and subtly.  It features so much so that I wasn’t sure if it was medicinal fluids stored in a featured intravenous drip, or in fact alcohol!   Are they drinking beer?  Are they drinking the Japanese drink, sake?  If the alcohol indeed plays a part in Sawako’s life choices, chances or fate, perhaps it should be renamed “Sake Decides’.

A note on Hikari Mitsushima and her deservedly revered acting displayed in this movie.  I’m no guru in all what is Japanese, nor on every film Hikari has been in but this is surely the most dress-downed that we’ve seen her, if not the most dowdy.

Throw in some larger than life colleagues, employee hatred & a humorous workplace anthem and you have the perfect recipe for a reason to check out this film sometime soon.  If undecided before, now I hope the decision of whether to see this film has been made.

Find this Trailer and other Minier [ok, that’s not a real word, but…] Movies here:

Links to Third Window Film (& similar distributors) are listed again below.  However, before you rush to clickety-click-away I’d like to use this space to mention the recent mindless riots experienced here in the UK.  Did you know that these riots caused hundreds of thousands of pounds in damages and loss to our favourite independent film distributors? These are, essentially… Arrow Films, Artifical Eye, The BFI, Crabtree Films, Cine-Asia, Dogwoof Films, Exposure Cinema, Eureka, Kaleidoscope Films, Left Films, Masters of Cinema, Metrodome Films, New Wave Films, Peccadillo Pictures, Revolver Entertainment, Showbox Home Entertainment, Terracotta, Third Window Films and Warp Films.

So, with the latter in mind it is even more important to spread the word virally about these unfortunate vendors.  On that note I leave you with these links… all which will, in some way assist in keeping such films to be distributed here in the so-called land of milk & honey.