Soon though, a slow grind-ing-to-a-halt-ing bus looks like it may be confirming that this is indeed the 80’s.  Another indicator could be some, or all of the music.  I’ll explain in a bit.

Yes.  The bus… Who’d have thought a bus in a Korean film.  They’re about as common as a London bus in a shot within a film set in modern London.  Ever present.

Anyhooo, a woman alights.  This woman is Miss (Su-ok) Han, played by Chong Yun-hui [or Jeong Yoon-hee].  We see that it’s a remote mountainous small-town area.   Alone, she looks around and calls out for signs of life.  Unfortunately though, her first sign is actor Ahn Song-gi [or Ahn Sung-ki] in one of his rare (or only?) non speaking roles of his illustrious and expansive career.

Ahn’s character, Kae-chol gives out a kind of snarl, while his gaze – understandably – petrifies our potential heroine, Miss Han.

Soon though, the creepiness of Kae-chol’s staring is an almost distant memory as a young boy leads her off to where she’s been searching for in the first place, by way of a short cut.  He points out the odd thing or too as they head onwards.  One of these is a mill.  Maybe an integral part later?

A short cut is taken, I say?  Hardly.  I’ve seen shorter motorways.  OK, an exaggeration but you get the idea.  Then again, a short cut is, I guess defined as some route which is shorter than the most known route, and gets you to the same destination.  Yep… I’m no fool.  Well, you decide.

The same can’t be said for Kae-chol.  You see, he is known by all the villagers AS ‘the fool’.

No fool though is Miss Han.  You may guess this though… even before it’s revealed what her profession is.  A teacher of some sort?  Could be.  Maybe.  A townie Korean moving from a city, I’d say and to teach in a village.  You could say that it’s a bit like modern day Korea and those lucky expats who go there to work [I’m talking of the South of course, not the North]… Yes, I’m comparing a Korean town-person moving to a village to teach, to an English / Amerian / whatnot moving from there country to Korea, to teach… English. Or at least the latter was confirmed upon my visit to Seoul [and elsewhere] for forthcoming film, “dOKumENtARy (http://www.Facebook.com/SouthKoreaDocumentary).  Anyway, I’ve drifted off track myself here – how could one do that though?  Ah, perhaps due to the mist!?

When So-ok Han is not teaching, however and indeed while she’s getting settled in, it’s her observing of these town-come-clan-come-village folk [call them what you may] which takes up much of her time.  And when she’s not observing she’s reading or writing letters from / to her beloved Young-hoon.

It’s at the point of such an example – the first – of this solitary letter perusing that we hear the electronic sounds of Vince Clark and warbling tones of Alison Moyet – Can you guess the artist’s collective name?*.  This is surreal and probably the most strange juxtaposition in the whole film.  Indeed, bleeps, plonks and screams of “Don’t Go!” fill our ears.

As unexpected as that music certainly was for me in this auditorium, at this time, it could be said that ‘expected’ though is the scene soon upon us.  I mean, how many films have a corn field or the like, especially the eery sort of film?  This doe seem to be an eery picture.  Remember, this is 1982.  Did I say that before?  Yes, I did… (too) many times. 1982 is early days for such a scene.  The Original or maybe plain ol’ Original some could say?  Anyway, in the early 80’s we were experiencing horror films with such plantations abound.

We continue to meet appealing characters, one of whom is a sweet and a little spaced-out looking girl called Soony.  She’s a being who’s apparently had a tough upbringing. Is she disturbed?  Definitely not in the way that Kae-chol is.

It’s not long after the introduction of Soony we witness a contrastingly non-bleak, nonchalantly or non-aware, maybe slightly kooky female wearing a brightly coloured hanbok.  Those Korean women know how to shine when it comes to dresses, or hanboks.

One thing which also shines – having strangely become accustomed or ready for the next tune – is the electronic music.  You see, another track of Clark and Moyet’s is heard… and of course it’s when Miss Han is laying down again – no, not in that way! – smiling whilst reading letters from her ‘hubby’ Young-hoon.  The song this time is “Situation”.

It was around this time that I thought how similar such electronic music was to the overall (and sometimes overbearing) OST.  It consists of keyboard, piano and organ sounds.  Imagine the horror films of years ago, complete with deafeningly loud overplaying of the instrumentalisation.

You could say that while our girl tries to suss out her surroundings and its folk – and indeed whether Kae-chol is really as menacing as his eyes and her suspicions make out – I’m also trying to work out this film’s feel.  Not only its feel but also the elements used.  Whether these be the acting, the colours, cinematography, imagery, style or camera work.

Regarding such camera work, we do have one or two POV shots, a few upwardly filmed shots and one clever use of camera & characters.  Look out for the guys, Tong-man and the young lad when they run out of a house and are seen running away… all in the same shot, but running behind the foreground.  Well, I thought it superb but who am I to judge.  I’m only a reviewer and… filmmaker.  *cough* 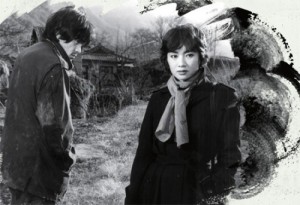 Miss Han, just like the river of the same name winds her way through the village and its folk (or ‘clan’ as they sometimes prefer to be known), Watching, Waiting and Wondering What Will happen and Wondering if this Kae-chol has some sway in how things are run in this mini-mini-city.

You see, everyone KNOWS everybody, all KNOW Kae-choi… but who KNOWS what’s going on?  Every person?  Is he causing harm or simply accepted for the man he is?  Whether this be something you or I would call a crime, who KNOWS?!  Crimes of passion, sexual persuasion or worse perhaps?  Is he simply a beggar… or a bugger? Am I asking to many questions??

Nevertheless, Miss han is human and as such needs some love.  “When is Young-hoon going to be with me again?” she thinks.  Then, as luck would have it he is actually due to meet her.  Cue a lovely little part of the film involving a railway station, a red umbrella, snow and a belt-out of another [now] electro-retro number.  Yes… same artist.  This time, “Only You”.

And again, perhaps that song or style of music does stand out a little and feels almost out of place but this could be intentional.  It’s like the part where Miss Han’s RED umbrella amongst the bleak, SNOWY background is also out of place.  Each example a juxtaposition in it’s own right, showing that constrasting opposites can attract. 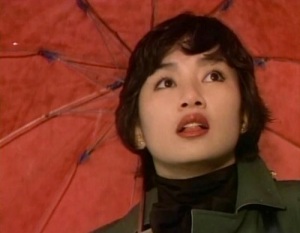 Going back to filming techniques, listen out for when the umbrella is first drawn and simply ‘cracks’ open.  Loud. Bright. BANG!  I mean, I know the audio is not fantastic in this picture – not superbly dubbed or synced, both voice and actions – but that’s surely due to the film’s age.  However, I am sure this overload sound of the umbrella beginning its use is quite deliberate.

That’s not the only thing to listen for in this scene.  A radio station makes an almost social commentary or statement [a social station-ment perhaps?!] about town or city living and how it can affect people, for the better or worse.  It’s surely no coincidence that Ms Han hears this – it’s almost telling us her “Situation”.  Pun intended, in relation to another song heard.

Anyway, at the station she is but does Ms Han wait long for her Young-hoon?  You’ll have to see.

Now, this being a Korean film do not be flabbergasted when I hint that there may be some darkness towards the end.  I don’t mean by the possibility or realness of her Young-hoon turning up, or not turning up but by events within a mill.

Is it ‘murder’ we should shout?  ‘Rape’?  ‘Grinding’?  There is definitely some Grinding.  I mean, it is a mill after all.  What did you think I meant?

Whether you take that comment as funny, sigh-worthy or with a pinch of salt, the choices are the same as how to take this film as a whole.

It’s surely eery, unusual and trying to say something, I feel.  But… A horror?  A dark tale?  Even a tale of finding oneself? Really?  Well… For example, there is a part near the end where our heroine states words to the effect of “Kae-chol could be our own unconscious face which dwells inside all of us”.

Then again, it is also assumed that he could be a ‘latent lover‘ to female residents of this clan.  Perhaps that.  Perhaps the other.  Perhaps both of these definitions.

So, to summarise, I certainly wouldn’t say this fits the normal story-box format and that furthermore it is definitely not your average run-of-the-mill flick.

That’s all, Filks**!
*
However, I’ll leave you with this video of highlights from Im Kwon-taek’s visit / season / retrospective, which was incidentally an extended part of the KCCUK’s “Year Of 12 Directors”.   It’s worth noting that this was at a screening of his film “Mandala” and I’m happy-or-sad to say that yours truly can be witnessed in this… Hmmm.
*
Note:  This Im Kwon-taek season was kind of sandwiched in between the previous director’s visit (from the KCCUK’s “Year Of 12 Directors”) and the London Korean Film Festival.  Yes, an extremely busy time.  The 2013 London Korean Film Festival will too be on us soon.
*
“I’m Im”

** Filks.  A combination of Film and Folks.

* Yazoo (or as our always-abbreviating-the-English-language-folk in the USA say, Yaz)