BIFF, You Kill Me:

Does this reviewer relate to a character from Back To The Future, perhaps an animated expression in Batman (the series from the 60s) or indeed the Busan International Film Festival?

Well, it’s the latter. But again, does this writer refer to the way it was making him feel during attendance or the pure audacity and greatness of the festival?

In fact, It’s both.  All.  The whole experience.

You see, last year I fleetingly touched down (via KTX from Seoul) in Busan just for a few nights, but even then I realized this event was both a full-on, booze filled, celebrity (although I hate that word!) affair. Except it had the socialness vibe you – or at least I – could never imagine.

This time around though, I swore I’d catch many films a day (well, at least 2 or 3 or the entitled “4” allowed with the Pass.  However, due to my own (non) self-control I subjected myself to pretty much all the parties I was made are of. And with parties comes great (ir)responsibilities!

You see, it comes with various free drinks and food. OK, I can handle the food but the drink?  Well, I could even blame certain parties for running out of the tipple of my choice that night, and forcing me to MIX MY DRINKS… But, and acquaintances who were present will verify the choice to excel was mine and I guess only mine.  One could even go as far and say that this Busan merriment was just another part of my research – well, there were photos and footage taken – for the forthcoming South Korea documentary, but wouldn’t that be just plugging the project?? (Click here if interested: http://www.Facebook.com/SouthKoreaDocumentary ; )

But it’s not the drinks, it’s the buzz.  The mixture of well-known or even little known but excellent filmmakers, newfound and old rekindled friendships from the previous year, or even those online acquaintances we’d finally come in contact with.

It was around 3 days into the festival when I saw my first film!

The pass system is pretty good, it even means you ‘can’ be prepared and know which films you’re going to witness at least 24 hours before you do catch them. However, this can be a hindrance to anyone (who, me?!) has been known to get up late. Because, rather than get to the BIFF Centre early enough… 8am ish – is that early enough for ya!?? – you not only have minimal filmic plans for the day you’re in, but also get no luck with the films requested for that ‘tomorrow’. You kind of know which are going to be the popular ones.

There are ways around catching the films you want, and alternatively you can end up seeing something which simply blows you away, unexpectedly instead.

Anyway, the ‘killing me’ aspect I refer to can be the amount of sleepless nights involved, liver damage and sheer partied-out-ness around.

However, the other way it kills you is the pure vibe. Sure this is Korea – known for its sometimes heavy drinking (what, and England isn’t?) – and maybe a film festival’s lineup of films combined with drinking is going to end in a cineaste’s tears. BUT – and I’m no expert in (international) film festivals and sure I know London’s ones – I hear it’s definitely no Cannes!

The way of Koreans, their respect, Koreanness and vibe mixed with reporters, press, jouralists, cineastes, film production companies and the like beautifully entwines to give any attendee an experience to take home with them, as well as a stack of new friends and the obligatory business cards.

What more can I say? You need to experience it. Be warned though, you may be scarred with a little regret but a lot of memories.

Talking of stars mixing with Press – be it at parties or at the many Q & A sessions – have you heard the one about the two Q-wentons?

You see, a mid festival surprise was the announcement of ‘Tarantino Is Coming’. What? ‘THE’ Tarantino?

Yes. Love or Loathe him, there’s no denying his style, popularity and influence. So it came to be that we were expecting him and not only that, but that he would be talking WITH Bong Joon-ho [whom I met at an earlier BIFF party, but no photo – yes part stupidness but part unknowing if photos were ok where it was!].  Soon the wait was over. Tarantino was ‘ere, if ya like.

Let me put you in the picture, my picture… Well, I would have done that day if only I’d taken the camera from my hotel room. You see, I thought it [the TARANTINO / BONG talk] would be crazily busy and in an area small enough for me NOT to get a real glimpse. So, I decided not to carry around my camera, and so was armed only with 2 iPhones and an iPad instead. What? I that not enough?! Well, I also thought I could maybe pop back to the hotel mid way through the day but… That wasn’t to be.

So, time was pushing on and I was finishing up watching Sion Sono’s latest (in video room, for the ‘missed film / parties’ reasons above and simply a mistimed load of screenings or fully bookedness) and my friend had just told me he was in the ‘Tarantino Talk’ area, 7th row from the stage and this was still 1.5 hours or so until the start. Damn, do I miss the rest of this film, rush back to hotel and get camera, or both of these? Either way, it was soon around 1 hour to go until the talk, so – having seriously considered AGAIN rushing back to hotel – I decided to sit in the seat ‘reserved’ for me and wait (regretting all the time… Although my friend DID have a couple of cameras on him… Yes, he must be as bad as me with the Apple products*, with cameras!), and so wait I, and indeed we did.

Tarantino, Bong, host and interpreter arrived to much rapture, of course.

Much talk later it was back to normal, but perhaps a kind of awe still existing within each one of us who’d been present.

The more interesting aspect, you could say came later on when a (now) good friend, Kwenton [can be pronounced Quentin] came to be in a film which Tarantino had decided to attend. Perhaps he’d heard of it, or just picked a film at random. It’s not important why. But Kwenton happened to be seated almost right next to Tarantino, Quentin.

Quentin T apparently joined in the Q & A discussion, as you’ll see in the below link.

That’s nothing too special I guess BUT for me, this whole occurrence took on a new meaning, one could say, with names. Or rather it ‘Went-on’ to take a whole new meaning for ‘Kwenton’ and ‘Quentin’. 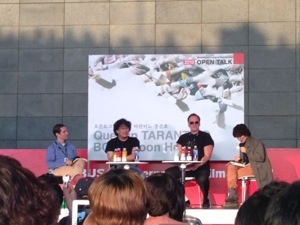 *Note: One of my Apple products was rented, not owned. I don’t want any of you getting the idea that I’m some kind of millionaire!