Sook-Hee:
“Why are you doing this to me?”

Mighty words?  Not really, but this line [obviously translated and provided as subtitles to us, the audience] spoke volumes to me as I sat and watched this film.

It reaffirmed what I was already thinking whilst snugly seated into my seat at the Regent Street Cinema, on Monday 11th September.

However, before I give the impression* of the film in question as being one of lacking in plot or reasonings, let me continue, because overall I enjoyed it.  I even chose to witness it on the big screen AGAIN.

*In the podcast episode below (on YouTube, but also on iTunes) I do a terrible interpretation, impression, imitation of the line “Why are you doing this to me?”, although I only wanted to emphasise that it was a line in the film which would allude to much of my thoughts and therefore form part of the review of this film.

Firstly, I knew, after arriving for this special evening at the Regent Street Cinema, that this was not a film to be simply sniffed at – and that from a guy who currently has a chronic sinus issue [that said, it hardly shows in my podcast/s… or does it?!]…

How did I know?

Essentially due to the following fact.

Two individuals, fellow writers, no… experts [myself not included in the latter!]… and friends of mine, let out to me that this evening’s screening was not their first time catching the film.  Indeed, two of these, whom I respect, admire their writings and conversation & more, had enjoyed the movie so much elsewhere that they were returning for more.  They also advised me that it may not be the kind of film I went in thinking it would be.  Should I, or even you expect the unexpected?  Definitely.

You see, sure, you may have seen similar films before, be it in the story, the genre, or the feel even but there is so much more to it.  So much so that at times it may confuse you, just like it did me… and others!

So, after meeting many of my pals (a few of whom are co-founders with me of LAFS: http://www.Facebook.com/LondonASIANfilmSociety) it was time to go in to the auditorium and enjoy the film.

Now… I don’t mean that it WASN’T TIME TO ‘ENJOY’ the film… No… rather that ‘was it really time for the said film?’  Not quite.

This evening, as you’ll see was not JUST about “THE VILLAINESS”.

Prior to the screening there was to be the much anticipated PROGRAMME LAUNCH of the LONDON KOREAN FILM FESTIVAL 2017…!

Tony Raynes, who has been involved in selecting films for the forthcoming and aforementioned LKFF, was our host for this part of the evening.

It’s a pretty good line-up this year and if you want to know all the juicy information AND Full Schedule, please go to this article of mine:

Links to the KCC & LKFF are here for your perusal and delight:

Directed by Jung Byung-gil and co-written by him and Jung Byung-sik the film stars Kim Ok-vin as our main character and, I guess our heroine.

Her character’s name is Sook-hee and although perhaps pronounced slightly differently – and even spelt differently (in both Hangul and English?) it did remind me of THE HANDMAIDEN’S central, or one of the main characters in that.  Maybe it’s a name of the moment.

Whatever the reason for her name, Kim Ok-vin plays her very well, and in various guises or lives… and I mean ‘lives’ in more than one way.  Either due to Sook-hee’s backstory or ‘past life’ or whether she’s being an all-fighting woman, a mother, a woman in love or any other emotion which the story throws her and her life into!

For those who aren’t familiar with actress Kim Ok-vin, just think of “THIRST”, “THE FRONT LINE” or many others I could list.  Not forgetting THREE films by the brilliant E J-Yong:  “THE ACTRESSES”, “BEHIND THE CAMERA” and perhaps one of my favourites of his, “DASEPO NAUGHTY GIRLS”.

I had the pleasure of meeting Mr E J-Yong a few years ago, in London and asking him a question of two.  Details of that interview can be found here:  https://miniminimovie.com/2012/03/06/e-j-yong/

Back to the film itself and its opening, and I don’t mean its general release in London and elsewhere… No… I mean its opening scene.

What a start to the film this scene is!  Even the fighting aside, the POV style is fun and a little of a genius stroke, and towards the end of which we are ‘cleverly’ shown or introduced to this character and her face.

I’ll say it now that this film is kind of bookended with two great action sequences.

However, I’ll also add something about one of my Gripes.  That Gripe?  Guns.

Frankly, there are too many in certain scenes… Or is it too many bullets?  Double Frankly, ONE gun alone is too many.

Not only that, knowing South Korea like I do – and, I guess, anyone who reads news, tourist information on Korea and is generally worldly (?) – the country is pretty much what is known as a gun-free state, or fire-arm-free part of the peninsula.

Swords and daggers alone surely would have worked perfectly well in this film and story.  No need for firearms.

Maybe I’m worrying too much about the fact that South Korea are almost ‘owned’, or controlled by the USA… even with the North & South situation as a side issue the US gets a lot of funding and payments from South Korea.  Is America becoming too much an influence on SK??

And… There is this sad thought of mine:  Is SK trying to appeal to Hollywood and/or the US market?  They love a gun over in ‘the states’, some would say – and what a ‘state’ is that to be in?

I won’t dwell on any American links to this film, except to say that, yet again we have the matter of the subtitles – as good as I believe they are – being of the US persuasion.  That said, the word ‘candy’ was used [very American] but also the spelling of ‘Neighbours’ [yes, with the ‘u’ include – English spelling].

Whilst talking about the good with the bad, the child actor, or actress in this is pretty good, cute and spot-on at the right times, yet at the same time I couldn’t help thinking who benefits from such young ‘stars’ being there on the screen, not to mention the discipline put on them?  Are such children pushed so hard by parents?  Is it them who want the fame, or money which their child may receive?  You can even see a similar ‘craze’ on Instagram and on much of Social Media – Korean and non-Korean!  Does the young actor enjoy it?

However, one great moment with the said child is when she decides to leave the table, expressing she’s full and tired [two things which toddlers / children of her age would probably NOT do – quite the opposite… It’s usually tough to get them to go to bed at the right time!], and all so that she can leave our main female character with one of the main male leads.

Yes… Humour is key in a few of this youngster’s scenes… and so is the relationship (is it a relationship, pe se?) between our heroine and that ‘guy next door’*

*Not ‘guy next door’ in the way that term is used normally but in a more literal way!
And… WHY is the man living next door?  Even at first we are not sure.  My lips are sealed.

Back to the opening line I mentioned:  “Why are you doing this to me?”

I thought the question asked by our main woman and heroine, “Why are you doing this to me?” was a very good one… I wondered why the agency even existed, for starters?!

Perhaps I missed the reason or justification but, again having such an agency, special force or whatever you may want to call them, it means the scriptwriters can dream up anything, just like in horrors and certain sci-fi films, and of course very whacky, ‘out-there’ comedies.  Hence I feel there is a lack of originality or realism.

However, I know it’s just escapism, or so people say.

All in all though, a very stylish film… and… the opening scene and final one are pretty good – excellent, in fact! 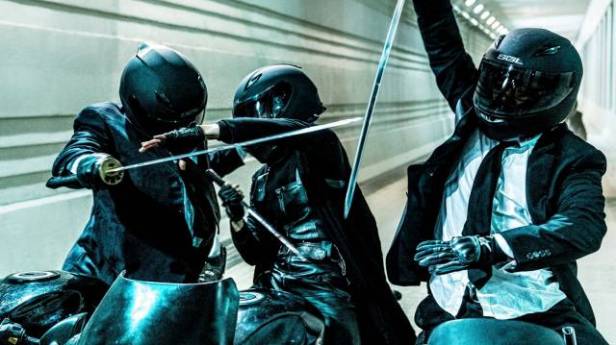 After beginning this article and therefore review, I went to witness the movie again.  This time it was at the Genesis Cinema – a lovely little place – in the Mile End / Stepney Green area of London.  My feelings were more positive upon the second viewing!

I wanted to be less negative this time around, forget the guns and other stuff and even attempt to make more sense of the film’s flashbacks and story… but I’m not sure that it helped!

On that second viewing I also tried to take more note of the music and score, as Paul Quinn (he of HangulCelluloid.com) had commented on how good it was.

Speaking of music, and for you digital music buyers out there I noticed that The Villainess OST / Original Soundtrack is on sale for a pretty good price on iTunes:  £6.99 (as I write this, obviously)…

And talking of iTunes – and honestly, I’m not working for them! – the film itself is available as a forthcoming release [i.e. a Pre-Order] at only £7.99 for the SD version… and just £9.99 for the higher quality version.  It should be available on or around on the 30th October 2017.

After quite a negative review, why do I now admit I liked the film, overall?   I mean, such ‘fighting films’ or action-type flicks don’t usually draw me to them… I even witnessed “The Raid”, way back when at a special screening and a few movies in a similar styling but I still didn’t ‘love’ them or even hint to admiring them much.

So why is it?  Maybe because it’s a female or femme fatale driven movie?

Is it the allure of a tough woman, even if, maybe, not even not for the right reasons?  You know, perhaps not in the ‘equal rights’, ‘politically correct’ way.

Yes.  Either way, I seem to be missing or have lost the plot [filmicly, and maybe in real life], not understanding the reasons for certain directions these films take or simply not catching on to the soundtrack in the film, but all this is coming from the man who sometimes does miss things – For example, I barely noticed the unique framing in the (non-Korean) film “A Ghost Story” when I witnessed it… I’ve since revisited that film and taken more in.  [Note:  A podcast review and maybe an article on here will follow soon regarding the latter mentioned movie…]

The podcast review… because you may have ‘missed it’ above.