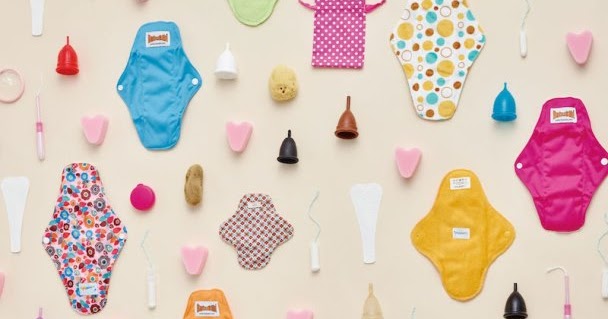 I certainly learned a thing or two!

The UK Premiere of “For Vagina’s Sake” (or “피의 연대기 / Chronicles of Blood”), at the London Korean Film Festival 2018!

Yes.  This film, as important as it is, and as humorous as it is – not to mention being truly colourful, both in it’s use of graphics, animation and… perhaps… language – taught me about some things I never knew.

That’s not to say that there aren’t things in this documentary which were also new, or news to many others – especially, perhaps, the historical data and information supplied to us viewers.  What did I expect though?  This FREE screening, courtesy of the London Korean Film Festival was being shown to us at the British Museum – one of the ultimate history lesson venues in London and the UK, surely!

But I, a male whose family is very female orientated – I have 4 sisters and a few nieces, for starters – and one who prides himself on being sensitive when it comes to the opposite sex (and maybe even am a little feminine myself, at times) really should have known more about the film’s subject prior to seeing it.

I do… now and indeed ultimately, & all thanks to this film.

And the F-Rating, for that matter!  And… Is this film certified as one of these?

Let me try to explain.

The F-rated film.  What is it?  Well, this can be a work of fiction or fact and to quote Wikipedia, “The F-rating is a rating to highlight women on screen and behind the camera. Developed at Bath Film Festival in 2014…”

But wait a moment… I could have sworn that, in the introduction prior to “For Vagina’s Sake” it was stated that the rating has been around for decades…!  It has… kind of… and if you’d only let MMMe finish… ㅋㅋㅋ

“Developed at Bath Film Festival in 2014, the F-rating was inspired by the Bechdel Test based on a 1985 cartoon strip by Alison Bechdel, and popularised in the 2010s by Anita Sarkeesian’s Feminist Frequency blog, and by Ellen Tejle’s A-rating in Swedish cinemas.”

So, the principle or idea, but not an official certification have been around for ages, however only recently have such films have it F-FFF-ully stamped on it!

F-rated – Any film that is written or directed by one or more female film-makers, or features complex female characters who contribute significantly to the story.

Disney’s FFF-rozen… or rather, “FROZEN”… is an example of an F-rated film, thanks to the introduction of such a certification.  Hardly my type of film – not that I’ve witnessed it – but this tiny titbit of news is surely a fantastic sign!

In addition to this, there’s the Triple F [FFF]-rated film.  FFF-rated: Used for any title which meets all three of the F-rated criteria: directed by a woman, written by a woman and features significant women on screen in their own right.

A couple of examples of the latter FFF-rated are this documentary, “For Virgina’s Sake” and, I believe, all 3 of the Films in the Women’s Voices Shorts Programme, as Corrina Antrobus explained when she introduced these works of fiction we got to witness later on this day of 5th November 2018, over at Picturehouse Central. 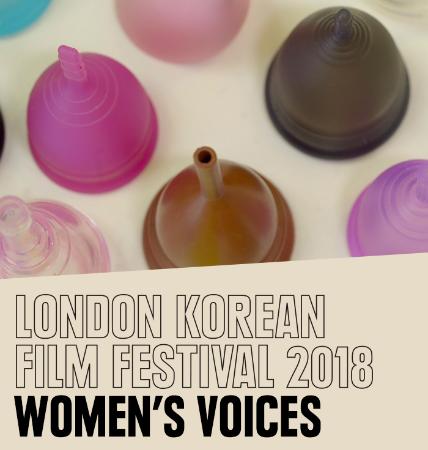 I should probably cover something else which was talked about at the film screening. Errrr… The film title itself, “피의 연대” or rather the Korean meaning, which is  near enough “Chronicles of Blood”.

It was discussed at this screening that the aforementioned title is certainly a better one for Koreans to understand – and I don’t just mean the fact that it may in in Hangul… No, the literal meaning is better, rather than “For Vagina’s Sake” which, of course is a play on other words.

Anyway, into the film we go!

This film is certainly full of colour and its also not one shying away from the reddest of all colours… yes, blood.  It’s done in great taste though, and very real when it needs to be.

Talking of colours, one early moment was one I found to be of the ironic kind – at least to MMMe, this weird minded reviewer – and it was when certain graphics appeared, whilst highlighting some facts.  These graphics or brightly coloured animation/s were those of fireworks.  Why ironic?!  Well… [wait for it]… this screening was on November 5th… Yes, Fireworks Night / Guy Fawkes night, or whatever you wish to call it… in the UK at least!

More colours and animation were used in other EARLY parts of the film, in which we have ‘EARLY’ man, or indeed Woman… of course. However, perhaps the term EARLY is more comedic than described here, and perhaps I’m referring to Period-wise, Menstruation-wise etc [in other words, not ‘LATE’!!]

But in all seriousness, even as humorous as this may sound, EARLY woman is shown, by way of brilliant yet basic animation displaying & indicating Rabbits [well, the skin of one!] being used as ‘sanitary towels’.  Was this Stone Age?  I’m sure, admits this man of far-from-EARLY Age!

These days though a Rabbit may mean something else… also still for that region of the body, I suppose. 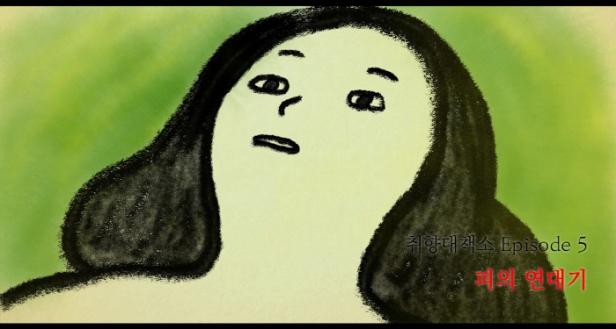 EVEn for those believers of EVE, as in ‘Adam & EVE‘, there is mention of ‘that’ apple EVEnt, concerning the snake and of course ol’ Adam & ultimately what that says about bleeding and periods.  I won’t go into it detail here… You have to seek out the film some fine EVEning to understand!

What I did love upon the witnessing of this film – well, one of the things – is its international-ness and therefore potential ‘global appeal’.

To start with, there’s Finland.  It was an individual or company in Finland who invented, or came up with the first good version of the modern-day menstrual cup… (I say modern-day because it’s also mentioned in the documentary that such cups or similar devices existed, or were thought about, way before this… in the 1930s!!)

Then we have an Amsterdam girl or girls, who seem to play a pivotal role in the film.  Yep, as well humorously quizzing their male actor friend on his knowledge of such subjects as these little objects and other female-used ‘things’ there is more to their story!  Such a Dutch girl actually met KIM Bo-ram in Busan, 2015 apparently – and believe it or not, I was there too!  And indeed at BIFF (Busan International Film Festival) 2015 for a while… What a ‘bloody’ coincidence!

Pivotal roles in this film do not stop there.  In fact, we’ve barely started.

One English girl who created a YouTube channel, whilst signed off with a chronic illness, shows people how to use such menstrual cups.  Well, errr… at least tries and tests & reviews all the various ones on the market.

Even our filmmaker, Ms Kim Bo-ram is another pivotal individual, key-player & star and, I guess subject for this film, displaying and maybe ‘testing’ (?) what actually does happen upon having a period, heavy flow or menstruation in general.  In fact, I believe Bo-ram even mentioned at the Q & A or the following forum that she simply became ‘ON’ camera because they didn’t have footage or incidences which they managed to capture when filming.

By displaying or testing, I’m referring mainly to one scene where we are with her, in the bathroom.  Yes, not only does Bo-ram talk to us, the audience – that’s honesty itself – as a ‘talking head’, she even gets stuck in, with the camera on her head in the toilet, filming the realness and redness of her release.  [Do we call this a GoFLOW caught on a GoPRO?!] 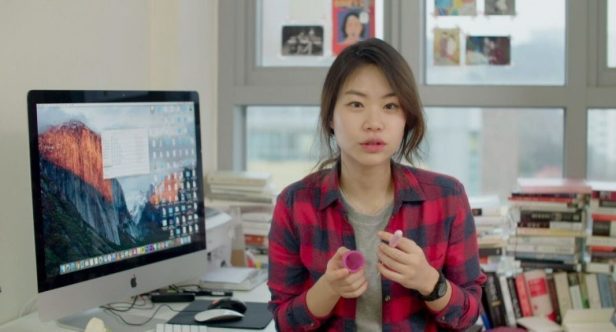 Far beyond what I can explain, as a man – and one with little time to fully research these issues – we hear from indivuals [women, obviously] about their experiences upon having a ‘heavy flow’ or simply regarding periods in general.

I find it both easy and difficult to write such a review of this movie – and it’s truly down to the documentary in question.  Sure… I can attempt to be Concise and Comprehensive but there is simply so much in this ‘little’ film, it’s both tempting yet tough.

The picture runs for approximately 84 minutes but feels longer… and in a good way. 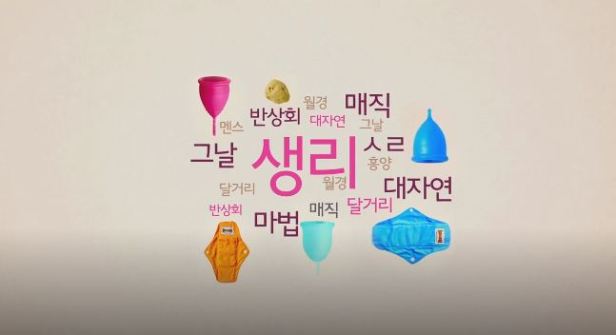 With that in mind, I’ll cover a few more points which were prominent ones and important.

1.  SANITARY SWORD IN THE SHEATH

There is talk of the vagina being like a sheath for a sword… ERRR … more correctly, the “Vagina,” comes from the word for “sheath,” the place a soldier puts his sword. BUT… is the vagina really a sheath and holder for a penis (?), OR as some say, a place for where a towel, or similar object goes into, and therefore being a sheath for such an item.

So… A tampon is the sheath’s sword, rather than the ‘optional’ penis!?!  Using the latter definition/s would or does truly take MAN out of the equation… I mean, why should ‘everything’ a woman ‘has’ be for, relating to, or all ABOUT males?!  Men may rule the world – although I hate this fact! – but women must always rule and own their bodies, whatever problems they also have to face.

OK… not really, but I wanted to touch on the little segment of the film concerning BIG news. In fact, BIG headlines which covered papers, magazines and perhaps most memorable, “Newsweek“.

With headlines and cover titles such as “Free Bleeding” and “There Will Be Blood – Get over it” [Newsweek] and the brilliant, and maybe obvious use of the word, “Period” as in both a ‘full stop” in at least one of such headlines.

Then we have protests concerning laws, rules and whatnot in which in one memorable moment an activist is protesting, and not only by way of NOT using a sanitary towel but by using a sole, or soles from her shoes.  Genius – in every way!

Koreans and others talk about heavy flows and their experiences concerning when they first found out what their period actually WAS/IS, what it meant or how to cope with it.… Also, whether it’s right or wrong to use any such device, be it towel, cup or whatever.  Ethics, morals and rights perhaps.

Yes, although the film did have an international ‘cast’ of women, one thing I thought about whilst witnessing this giant documentary on the big screen was this…:

In contrast to the fact raised in one part of this film concerning not being able to find any YouTube instruction video about “how to put in a cup, correctly” in the Korean language, this film itself, made by a KOREAN and featuring many from that country – a land in which often females are ‘invisibly’ downtrodden on in society – is probably the most unique film about ‘all this’… and yes, IT IS, in many way’s from KOREA!

In summary, it’s a film which shows that, sure, there may be limited mention of such ‘personal’ and almost taboo subjects on the inter-web these days, in Korea and other less ‘free-speech’ nations, but there are many, many Koreans in fact who want to talk about it.

This movie shows us that.

“For Vagina’s Sake” (or 피의 연대기 / Chronicles of Blood) is a documentary which is surely unlike the red subject it speaks of… i.e. NOT ‘better late, than never’ … ?  In the context of you know what, it’s surely not better to be late… unless of course, you are hoping for pregnancy.

And hereby ends my long and winding ‘Chronicle of Blood’-y words.