As the London Korean Film Festival 2019 comes to a close – although technically, it now embarks on its UK tour for another 10 days or so! – we reflect on some of the festival’s perhaps lesser known yet more unique screenings, talks, forums and most importantly FREE events!

Every year the London Korean Film Festival (LKFF) not only has interesting and packed film segments and strands, but they seem to pull ‘hidden gems’ [but NOT these ones!] out of their bag too!

I may not be talking about films only, but certainly film events, free screenings and interesting venues to match.

Firstly, the LKFF always includes FREE screenings at the Korean Cultural Centre, London/UK (KCCUK) itself during the festival. This means that you not don’t necessarily need to spend money to attend Korean films. Such films will usually be as part of a bigger strand, a particular director focus or shorts, as indeed this year sees their Mise-en-scène screenings shown at the KCCUK – previously, or usually, these Mise-en-scène line-ups have been paid screenings, in such places as ICA London and Picturehouse Central, to name a couple of venues.

Then there’s a (FREE) film event and/or discussion/talk at the British Museum. This year, MMM attended such a film, and Q & A-come-discussion at that very venue.  The film was an interesting and, I’d say, personal documentary – details of which can be found HERE – and yes, the director was present.

Another example, from a previous year, of a similar film screening (yet very different movie) was the one we wrote about here, from 2018:

Plus, there is usually a forum or two, FREE again.  The one yours truly attended this year was at the sublime Regent Street Cinema [yes, the same venue as the Opening Night and Closing Gala screening & the same used for the LKFF “Teaser [and build-up] Screenings” throughout part of the year.

And perhaps last, but certainly not least are their events which occur a few [TFL/Train/Tube/Bus] Zones away from Central London.  These have been known to be screenings in such places as the Odeon in Kingston or other venues in that area.  Why?  Well, for a start it’s home to more than one university campus and surely such a uni [e.g. Kingston University] would have an Arts or Film department…

The other reason could be that Kingston and surrounding areas (namely, New Malden, I’m thinking of here) have a LARGE Korean population and community*, and in fact such a community may also have members which are enrolled to such Kingston university/ies in the area.

*New Malden is rumoured to have the largest Korean community, in one town, in the whole of Europe – that’s KOREANs as a whole, but also individually – if indeed we must separate them – South AND North.

Some of the latter fact is ‘assumption’ but it’s good to see that the LKFF doesn’t ignore such an area.  That said, even its London events and screenings do attract, and always have done, Koreans as well as non-Koreans.

This year was no exception to an event in Kingston and although the said event/talkwas a tad hidden again – by which I mean, not actually listed in the timed LKFF schedule but elsewhere in the programme (not to mention as a Facebook/EventBrite event) – it was one which all whom attended surely didn’t regret.  Let MMM elaborate… 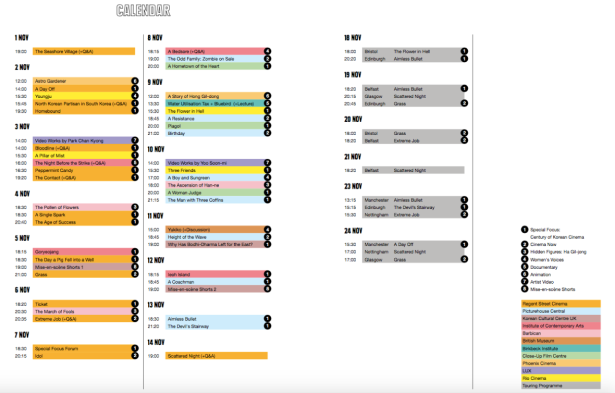 You see, not only would the Closing Film be one named “Scattered Night” (or “흩어진 밤”) and not only was the director, or co-director to be in the UK for this Premiere [what? didn’t I mention that many of these film screenings, the FREE & the Paid for, are often Premieres of some sort?! Well, they sure are!!] the people, students of, and visitors to Kingston would be able to see and meet the director herself!  MMM and pal were one of those folk.  The venue?  The Kingston School of Art. The title of the event?  “In Conversation:  Kim Sol”.

The result was that we, and a load of eager film students were treated, not only to a lovely talk, moderated by Lucy Parker but also a short film by Kim Sol, called “Inertia”, clips from “Scattered Night” (totalling around 15 minutes, I guess) and a kind of Q & A with questions from students and more. I should also give a little shout-out to Ms Eugene Kim [on the left of Kim Sol] who did a brilliant job of interpreting.

Although co-director of the film “Scattered Night”, Ms Lee Jihyoung was not present (she was, according to Ms Kim Sol herself [when we chatted to her afterwards] at another film festival… in South America!) here is a little interview featuring both filmmakers for the Jeonju International Film Festival 2019, where it Premiered in Korea.

[Incidentally, it’s a brilliant festival – MMM can say that, as we’ve been there before!]

Here are a few pics from this lovely, informative & intimate event…

Lastly, some words about the event taken from EventBrite (AND… the 2019 London Korean Film Festival TRAILER below):

During the ‘In Conversation’ session, Kim Sol will share her experience of the film festival circuit as well as discuss the process of developing a feature with a writing and directing partner, their take on creative collaboration, working in tandem and sharing the limelight.

Kim Sol (b. 1992) majored in directing at Dankook Graduate School of Cinematic Content. She took up her place behind the camera for the first time in 2016 on the short film Inertia, which screened at the Seoul International Youth Film Festival.