A hotly anticipated movie & probably very different from his (Duncan Jones’s) first film, Moon I thought. I mean, even from the Source Code poster it seems to indicate that this film exudes action…something which Moon (I’m happy to say) lacked.

Well, let me start by saying how I imagine the screenplay pitch to Duncan went – perhaps it was something like this:

EXT – WHO CARES WHERE – DAY

You did a brilliant job on the Moon film…and…well, we have another film idea for you. It’s a vehicle for Jake Gyllenhaal.

Yes, Donnie D but he’s done much since…

…and is keen to work with you and your directing style. It would mean a much bigger budget. We thought of you because Moon was mostly set in one area, almost a Box…you know, shot within a few walls of a spacecraft…and this vehicle for Jake is set in a world or you could even say a box, where his character is seen spending much of his time

Cool. And I guess with a bigger budget I can try some new shots I’ve been picturing

Indeed. It’s your picture. All yours.

Great internal shots and some smooth external, futuristic-but-strangely-current landscapes. However, we’ve been thinking that rather than flashbacks and atmospheric shots ‘inside the box’…excuse our pun…

We want to add more scenes which show the situation and action.

You mean…to change it beyond all recognition?

And so was born a film we’ve almost experienced one hundred times before, or at least it feels that way.

Still, I was happy to give the film it’s due and sit through it & also expect a great picture from the much-hyped offspring of David Bowie’s. [For those who don’t already know that about Duncan Jones].

The picture starts & dramatic music ensues which has an almost 70’s feel…or is it 80’s?…I couldn’t quite put my finger on it – but it has a retro feel to the movie or at least the credits.

We meet Jake’s character…or perhaps we don’t. Does he know who he is? He seems unsure…I’m immediately reminded of other movies, Memento to name just one. 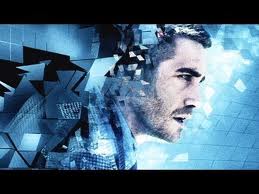 Luckily* he has an acquaintance on the train, a pretty female (Michelle Monaghan). Could we see that coming? Not all of us, sure. *I say ‘luckily’ he has her but she doesn’t really manage to help the situation. He still doesn’t know who he is – well, welcome to the world mate…we’re all trying to find ourselves!

Joking aside, this man is clearly lost, confused and convincing…just look at that Hollywood conviction in his concerned face. But…Jake-ing aside, [*sigh*] whichever character he is he finds he is part of a bigger picture. Is someone controlling him, manipulating his being there?

I try hard to minimalise spoilers, as you may know already so I’m trying to avoid certain moments in this film – although there are certain points which must be relayed.

You could say that a Groundhog Day motion soon begins, with a moment or two where you are convinced you’re watching a re-run of Quantum Leap [incidentally, isn’t there a movie for that in the pipeline? Who knows, who cares?]

One of the latter moments points out – to this humble reviewer anyway – a possible flaw. You know where if a certain event hadn’t happened in a movie how would it continue? Well, it’s kind of like that… Maybe you’ll spot it. Hint: It involves a train, but for those who have already seen it you will know that almost the WHOLE motion picture revolves around a train. ‘Revolves’ being another apt word for events in this film.

I was trying to believe, and was mildly accepting Jake’s conviction in his acting. It was realistic enough for me and, I guess for everyone else…but…then there was HER acting: Good but over the top and therefore less believable of a ‘real world’ situation. I forgave her…when…

…Along came Jeffrey Wright…and…his…acting. Oh my god, I thought he was on stage somewhere – perhaps on Broadway or at my local Tricycle Theatre, where I’d actually been to see Source Code. I’m sure it was intentional but it seemed so hammed up. I almost couldn’t keep a straight face.

This acting and to say the least, the tried and tested (too many times) story gave me a negative slant for noting points for this review.

We have all the schmaltz of so many other Hollywood films. We have the love interest, the plot, the effects [not as all-over-the-movie as other pictures, thankfully) and even a nod towards how the main character and Dad never saw eye-to-eye.

It’s ironic that both the main star (Jake G – Donnie Darko) and director (Duncan Jones – Moon) are both remembered, thus far for their cult – and better – earlier films. It’s a shame.

Of course, this is Hollywood and also only my opinion. Sure, go and see it – especially if you’ve never seen Minority Report, Memento, The Truman Show, Groundhog Day or Quantum Leap – but I’m sure most of you would have seen at least one of these. Point Proven?