(Note: I composed part of this while Meeting a Tall Dark Strong-coffee!)

Film:  You Will Meet a Tall Dark Stranger

Bonus:  Q & A with Gemma Jones

First thing to catch your eye in this typical-Woody film is how Lovely London Looks – although probably more so for an In-towner rather than an Out-of-Towner.

The second aspect? The colour. Do we call it Americanised Colour? You could do but the main thing to note is that it doesn’t seem out of place. Sure, it reminds you of an earlier time in film, but bronzed in such a way that it decorates this Englishness to pull it out from the screen.

Here at the Tricycle Theatre (the cinema part…of course), my choice of venue, people were laughing out loud from the beginning. I have to disagree…not that it wasn’t humorous but not ‘laugh out loud’ funny. Though, when the humour came, especially as we warmed to the film’s characters it was witty. Well, this is Woody Allen.

And yes, his last 3 films – the British trilogy, or they were meant to have been a trilogy up until now [or were they named as his British-thriller-trilogy? A thrilogy perhaps;) – may have got mixed reviews overall, but this one is definitely a return to form, to coin an already overused phrase. Note: I guess Match Point was the exception to the ‘mixed reviews’ rule…It generally got received well, I believe. 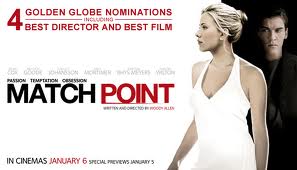 This was not New York, but a New London. That doesn’t mean it can’t be undeniably “Woody”. Just listen to the narrator – it takes you back to his old-style.

I don’t like to spoil plots – and I don’t think this will – but here we are introduced to a character, Helena (played by Gemma Jones) who is currently seeing a fortune teller. This central character – in this, errr…ensemble piece – revitalises any stale scenes she appears in by the sheer mention of this fortune-telling individual, who seemingly has all life’s answers. Inevitable perhaps that references to the afterlife ensue and even a seance.

It’s amusing seeing Mr Hopkins as a guy who is perhaps currently having a midlife crisis. And twice as funny seeing his current squeeze, played by the brilliantly perfect Ms Punch. You couldn’t get more of a stereotype of such a girl if you tried. And, referencing my mention of the film’s colour …check out HER tinge!

As well as the fortune-teller running joke, central to the story is one involving Josh Brolin’s character and the book he is writing, but not having much luck with.

All in All, it’s All in being Allen. See what I did there? Well, see what Woody does here – he may not conjure up amazingly original filmic ideas but he is still able to work his magic.

In the subsequent Q & A with Gemma Jones, she discusses many items as well as, of course working with the renowned Woody. Gemma is extremely down-to-earth and dresses like one-of-us – but I guess, why Woodyn’t she…?