A road movie with more than it’s share of comedy, drama & romance…and less a vehicle!

This was my third movie at the Korean Cultural Centre, London and the first one I’d seen there which was over 10 years old…well over in fact.

As always, I wasn’t sure what to expect and deliberately didn’t try to catch any trailers, clips or indeed reviews. I was more than pleasantly surprised.

It starts…Bleak. Partly because it is snowing and also quiet. I was thinking at this point “Is this going to be a little arty, almost Hong Sangsoo-esque?” and then my attitude changed & what with the snow plus slow beginning I began to think of it as a Korean “Doctor Zhivago” – but with humour, as indeed it wasn’t long before I knew that this was not a film to be taken too seriously.

A couple of travelling men, bickering and journeying together. This was pleasant enough and the snow continued atmospherically throughout this period. 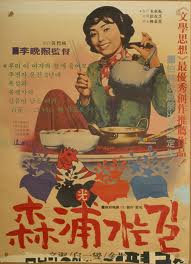 Enter a girl. Or did you see that coming..? And oh my, how her red coat juxtaposed against the snowy background. She is definitely the light in this couple’s journey. She is a feisty girl – with a bit of a past, or indeed is it still her present having an effect? We are kept guessing as to whether she indeed is a tough-as-nails-character (she was once, or maybe still, a prostitute) or in search of the man of her dreams.

What follows is a love/hate relationship…but more so between the girl and younger of the two travellers. Turning bittersweet, for a better word.

They require food and enter a funeral gathering (perhaps a wake, but not the sort we may experience here in the UK) and get involved surreally with dancing and singing – this scene is a out of place, but it works all the better for it. It is a kind of ‘trippy’ scene or at least couple be given the right substances. It could have been something from The Wicker Man…but without naked dancing. Incidentally, the younger of the men starts to act obviously out of character – Out of character for a funeral, you understand, but not necessarily for him! – followed by the rest of this thrifty threesome. This ultimately means they ‘have to leave’…Which leads us to…

The girl, the older man and the younger are shown in slow motion in ‘getaway-runaway’ mode out in a snowy landscape, but they are displaying far from desperate faces. Quite the contrary. If this were not enough of a great shot, wait until I tell you this: It is told in almost silence & tranquility. Picture it if you will…although I hope you don’t as I don’t want to spoil the surprise or impact of such a scene.

The story continues and of course peoples’ histories are half-uncovered as well as the obligatory mishap on the way.

One of the last scenes involves a train station as they each wait & obtain tickets for their intended journeys. This scene brings a little more humour but also much emotion – or at least it did for me.

All in all, what started out as a bleak and uncertain trip – both for these people and the film in itself – is finally evolved as A Road To Somewhere…