[Following “Julia’s Eyes”… http://bit.ly/l8Iau5… ]  I focused on exiting the cinema, like a man possessed [and intent on getting food], did my best to verify the ETA of the next film to appear on the screen & headed to the culinary un-delight vendor around the corner.  I purchased a bite, headed back to the venue, grabbed a coffee and took position again in the cinema.  If that reads a tad speedy that’s because it was!

One quick and discreet phone-call later and the film was almost underway.

The Orphanage was On:

Amongst children seen playing, we see a scarecrow, which I must admit has the dress-sense and hair of one of Johnny Depp’s famous characters.  But which film am i thinking of?  Benny & Joon perhaps.  Anyway, it’s not important.

[Food for Thought:  I take it crows are anti-christians and therefore fly away from such “Jesus-on-a-cross” stanced scarecrows…As I say, that’s just Thought Food]

We’re also introduced to some lovely titles…but lovely designed titles do not make a great film, of course.  Yes, I was in a tad negative mood.  Only a tad, due to my non-impressedness from the previously shown film, Julia’s Eyes.

I liked the fact that this (along with Julia’s Eyes) was a double-bill and therefore thought of the following:

Analogy Part I: Julia’s Eyes involved…yes, you’ve guessed it, a women (named Julia!;) and problems with her eyesight.

Analogy Part II: The Orphanage and an early – and I guess you could say first real – scene featuring a woman waking up and therefore her eyes being opened. 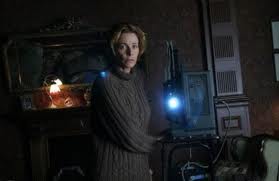 Now… On the assumption that you’ll know a tad about this movie already – even from posters I guess you can tell it’s subject matter – I’ll reveal vague suggestions of story.

Essentially, we are talking either about ghosts, invisible friends or poltergeists here.  And on that ‘revelation’ there is a part where a trail is left for such beings…(or ‘non-beings’, would perhaps be more apt) …and this path trailing reminded me either of Hansel & Gretal or E.T., or both.

Now, this is not the first film to use the idea of a fancy dress party and I’m sure there is many a fright film out there which does so, but this particular one did make me think that perhaps it would have been a different story without this party. Not that there wouldn’t be a movie anyway but, well you’ll perhaps see what I mean when you see this movie – if, indeed you haven’t already seen this picture before…It was released back in 2007.

[And even if you have seen, I hope you’re just interested in MiniMini’s opinion and perhaps just want to be entertained by reading the review – after all, that’s partly why I write these – see my Mini-Mission Statement ;)] 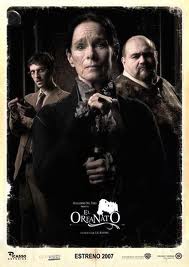 Now, shall we have a seance?  Or what I like to call a House Market Evaluation..!? *laugh* (OR) *sigh* Anyway, perhaps it is just me, but I was thinking that the old woman employed to undertake such a task looked remarkably like an older version of the lead female.  Also, I’m trying to recall where I’ve seen this (much) older woman in movies before… Hmm…

We then have a bit of a grown-up-Home-Alone scene as our main lady prepares to summon those whom perhaps she would be better leaving to their own devices.  It’s similarity is only slight, but a ‘Home Alone’ aspect I saw in more than one way.

I can’t help my humour or word-playing – it just comes out – but there are some things I should apologise for and this could be one.  Basically, one character is looking or reading a mirrored plaque on a grave… and I thought of him saying “I can see myself in that!”  One day, yes. *sigh*

And with that bit of shallow philosophising I’ll end this review on a higher note, just like a Hollywood happy ending.

A suspenseful thriller-come-horror, having taken us on an only vaguely cliched rollercoaster, rounds events off with an ending that big softie [and owner of a child’s heart & mind, and perhaps an orphanage of Hollywood kid actors at his home] Steven Spielberg would be proud of.