The past two years in the UK have been memorable, not least for the country as a whole – the Olympics alone in 2012 could account for a massive percentage of this memorableness – but for Korean cinema in London, and other cities.

You see, the Korean Cultural Centre (based bang in the centre of ‘town’ and a few steps away from Nelson’s Column in fact) have been putting on a real show and treat for Korean film cineastes. We even had Hollywood A-lister Bruce Willis, John Malkovich and Helen Mirren attracted to the London Korean Film Festival in 2012.

However, for MMM the perhaps more attractive and inspiring events of all were the last 2 ‘Years’ that the KCC put on.

Yes, in 2012 it was 12 months of revered Korean directors in their “Year Of The 12 Directors” – whom each [pretty much all of them] visited the UK and even met audience members.

[The latter year being so inspiring to yours truly that it re-sparked a love of filmmaking – yes, with the commencement of a very special documentary now currently in production – follow here for further news & updates:

Then, last ‘Year’ it was the “Year Of 4 Actors”… and wow! a whole year of these BIG actors / actresses, their films and indeed visits.

Oh and a certain President visited the film festival too… OK, it isn’t hard to guess which one. 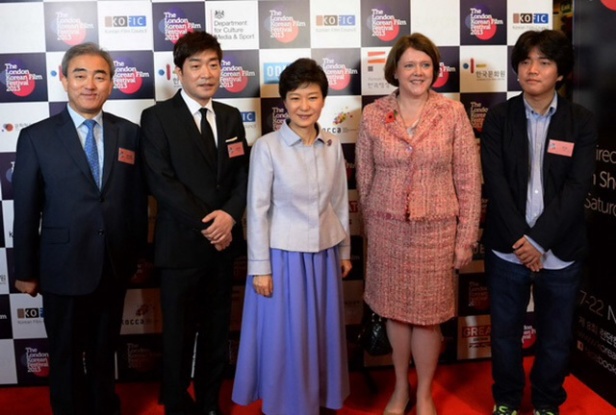 And… it’s a known fact that Koreans can be hard workers, studi-ers and organisers so is it any any surprise that we have yet another year of K-Film-Fabulousness?

What is it this time? Well, it starts on the 13th of February (Thursday) with the talented screen writer and film director, Park Hoon-jung.

Here’s a massive clue as to what the first is:

But I’ll let the KCC guys tell you more of the details on what the season is about.  So, here is the latest blurb, pretty hot off the press:

Over the last two years the KCCUK has undertaken two ambitious film programmes: The Year of the 12 Directors and The Year of the 4 Actors. Both spotlighted significant Korean filmmakers and actors with film retrospectives and audience Q&As. In 2014 we will broaden this with The Year of Film Professionals: a new programme of screenings focusing on the Screenplay, Music, Cinematography and Production Design in Korean cinema. In turn for each quarter of 2014, each of these aspects of the film process will be showcased with 4-6 films and a culminating Q&A and workshop event with one of Korea’s top industry professionals.