Bonus: Q & A with Katell Quillévéré

Showing as part of the “Rendez-vous with French Cinema 2011” season and in the lovely “Curzon” – Soho branch – this was a last minute decision to see what turned out to be a beautifully shot film, by way of a complimentary ticket. I use the term ‘turned out to be’ as I was a little doubting seeing the movie, due to the mention of a large religious undertone to the picture.

Incidentally, this Curzon – my first visit in a Curzon anywhere – lived up to the hype I’d heard about it.

I previously referenced the possible religious undertones…These were realised in the first scene but these were displayed as if this church was part of a cult more than a religion – or at least in my eyes. The feel, look & sound seemed to put a disturbing slant on ‘the church’.

The movie’s protagonist – or you could say agonist – is a 14 year old girl. Not only is she coming of age and therefore trying to figure out life, something has, or is disturbing her. Added to this – or perhaps the cause – is that every person she connects with, whether a family member, a preacher type or a young (potential) boy-friend comes across as a little creepy. Creepy to her and also to the film’s audience.

Is this poor but seemingly strong girl that adolescent – or is this coming-of-age woman just craving a little of what such girls want – adulation…? 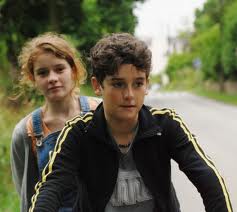 There’s no denying that religion plays a large part in this linear story, although I felt that I wasn’t sure if this central character was really religious or not at times.

Hardly a spoiler, but there is a confirmation scene included, and it took me back to when I was young. “Confirmation”? What a word…What, up until then I was nobody, no name, no existence but now I’m ‘confirmed’? I thought there are governmental and national registers which confirm you exist, no? 😉

But seriously, and bringing the subject of religion to a close by this lowly reviewer, I did have to shout out inside my head “Lord, are you trying to tell me something? A Radiohead tune in the movie too? The third film in the last few weeks [two of these this same week!] to feature them. God, are you hinting that I’m depressed?” I prefer the term ‘melancholic’ over depressed anyway. Note: I do not dislike Radiohead…quite the opposite.

Apart from the style of the picture reminding me of a screenplay which I drafted many years ago – at the start of this, at least – it was an all-round win with me and therefore won my approval. And by this, I recommend to anyone…Go see!

The lovely director, Katell held a Q & A following the movie. Incidentally – and is the case with these sometimes – she opted to have a translator, even though her English seemed pretty good to me!

Amongst many other aspects covered, a girl stated to Katell in this Q&A that scenes were not long enough for emotional connection but the emotion still gets you at the end of the film. I agree with this…in such a way that I was engaging with the central character but didn’t know where each of her circumstantial situations were leading her. I wasn’t sure how it would end but ultimately it did, and with a suited resolution.

Lastly, its interesting to note Katell’s reasoning for one of the ‘creepy’ characters [my description – I forget her exact words] in the film. You may or may not find a certain grandparent creepy or perhaps pervy (a grandpervant?!) but Katell states that this character is old, and nearing life’s end & so is probably realising or recalling certain pleasures before he goes from this mortal coil. People may bottle cravings up, taboo or otherwise but feel no shame on admitting such wantings before they leave this life.