Any reason for releasing two versions?

Ready for this release?

Should you see both versions?

Indifferent to either style?

Why… Why… Why did we start this article with those questions?

Well, not only may you have heard that a new version of Bong Joon-ho’s “Parasite” (기생충) is being released and in Black & White, you may also not care… and that is fine.

After all, this isn’t the first time this has happened to a movie and neither is it the first time to occur to one of Bong’s films – It happened to “Mother” (마더 / Madeo), albeit a few years after its initial release.  For anyone unfamiliar with that film, you can check out our mostly spoiler-free review here: https://miniminimovie.com/2011/09/24/mother-madeo-마더-two-venues-one-mother/

Also, for anyone unfamiliar with the success of “Parasite”, and not least at the Oscars feel free to check out MMM’s / Jason Verney’s little video about it, below:

More Korean related, film related and indeed travel videos can be found on the channel:  www.YouTube.com/JasonVerney

Anyhoooo, whether you care about a film being released in two formats, I wanted to share a few thoughts about it, as well as mention a little about the Black & White version, its rumoured and confirmed distribution in the UK and its Premiere in this [un]fair land we call Britain.

Firstly, this version’s Premiere is – no secret – at the Glasgow Film Festival 2020.

It’s next week, although there seem to be tickets still available:

Next?  Regarding its UK release, a little bird or indeed a few birdies have alluded to or explained when this will be.  I will say though – or all I can really say is – that it’s not likely to be simply a few days after the Glasgow Film Festival.  Therefore probably a week, two, three or more after.

It has been stated that it’s getting a ‘limited’ UK release and therefore we’d surmise that this means only Curzon cinemas (due to the link with them – see above video) OR both Curzon cinemas AND independent cinemas OR the latter PLUS a few special screenings at other outlets.  Vague, I know but it gives you some idea at this point in time.

But… why… why?  Why… is this film being released?

Well, director Bong Joon-ho has stated a few times the reason for this version being made / released, or at least some of his statements have been posted by media.  What are these?

“The smells are more intense”

”The great masters like Kurosawa Akira, Jean Renoir, John Ford, Alfred Hitchcock, if we see their filmography, they have some period of black and white, and also colour films,” said Bong of why he had decided to make a black-and-white version of Parasite. “They have both two different kinds of periods.”

The above statements or paraphrasing can be found, along with much more of a description, in this link:

“I’m sure everyone will have a different opinion about this version. Personally, I think all the characters look even more poignant, and that the distinctions between the three different spaces where the families live, with all the shades of grey, are even more tragic.”

Taken from the site of the International Film Fe

stival Rotterdam, which is where the Black & White version had its World Premiere recently:

Of course, there are more statements out there but you get the idea, hopefully.

Why did I post that video?  Well, as there was much talk of Bong + Tarantino (+ Scorsese) after the Oscars and indeed partly due to Bong Joon-ho’s various Academy Award accept speeches mentioning those two directing ‘greats’, it seemed fitting to post a snippet from when MMM was over in Busan for BIFF (Busan International Film Festival) in 2013.

Yes, not MMM’s first trip there and since then MMM has been there a few times more, but a memorable one.  In fact, the same year & same place when yours truly met both Bong Joon-ho AND Song Kang-ho… or AND… Jeon Do-yeon! 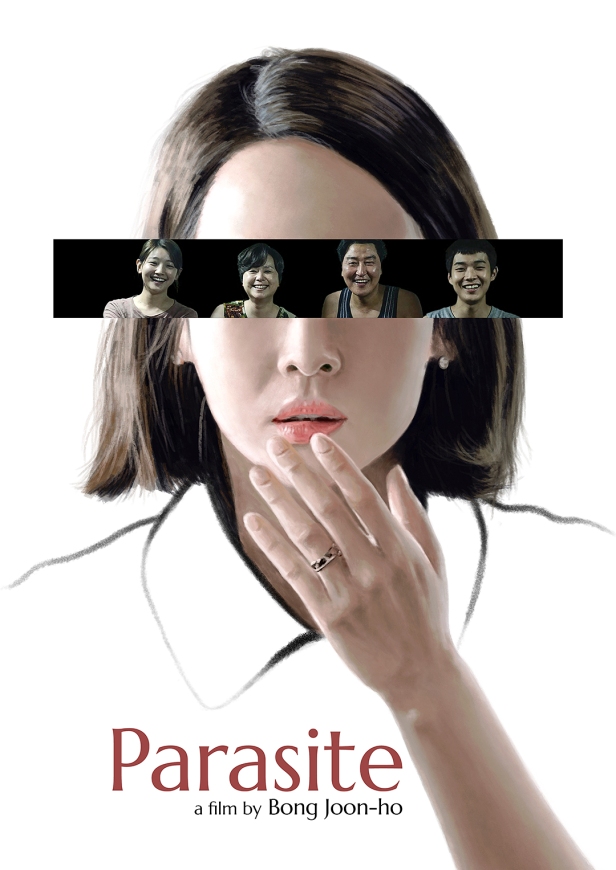 Lastly though, I wanted to mention why, in part, we created this article – as well as expand on the ACRONYM used at the start.

You see, via social networks, messages and even in person I’ve been having discussions with friends regarding the release of this Black & White version of “Parasite”.

Apart from the obvious “What is the point?” argument we’re bound to hear on such an announcement of a different version of a film being released, there was one conversation in which we were friendly arguing over whether the Colour version should be seen before the B&W.

Or, in fact, could the B&W be seen first?

Of course, there are different ways of looking at this argument or how the conversation should conclude but I’ll leave that for yourselves.

So, whether you’re a B&W purist, a photographer, a lover of cinema or indeed the changing technology we experience as humans, I hope you enjoy whichever version you see of this film.

One thing though, always endeavour to catch a film on the big screen if ever there’s a chance.  Any picture, that is… not just one by Bong Joon-ho!