Imagine a post-chaotic world where, not only do independent cinemas thrive, grow and indeed start to appear in higher numbers, but conglomerate multiplexes struggle and fail.  Mind-numbing, undeserved or downright overly-commercial films would not be distributed and only good quality, honest and artistic movies would be allowed… A NEW ‘old’ or new WORLD would be created.

I call this unmade film, “The Revenge Of The Independent Cinemas”… ?!*

This is unlikely to happen, but a part of it could.

You see, the online streaming service and film distributor, Mubi, or more specifically “Mubi UK” has launched a UK Cinema Fund to support exhibitors to help support cinemas/exhibitors across the UK impacted by the coronavirus pandemic, when [well, I don’t have to tell you, I’m sure] the whole country is in our own British version of a ‘lockdown’.

The UK Cinemas Fund has been started with a £10,000 donation from MUBI, and the campaign aims to raise £100,000 to help support independent cinemas and film festivals across the UK who are facing severe financial hardship as a result of the ongoing closures caused by the COVID-19 pandemic.

Talking of “launch”, and before any of you go launching into ulterior motive or conspiracy territory – I mean, doesn’t the world currently have enough of those?! – it’s worth pointing out that MUBI will take no part in the allocation of funding. Yes, I’m bolding this statement, just as it appears within the GoFundMe page – Further information below.

The total raised (hopefully well exceeding the intended £100,000) will be donated to the BFI FAN COVID-19 Resilience Fund, which was set up this month by the BFI and its UK-wide BFI Film Audience Network (FAN) to offer critical relief and business continuity to exhibitors across the UK.

For any who are not aware, the BFI FAN is a network of over 1,000 cinemas and other film organisations – led by eight Film Hubs across the UK to bring the best in UK and world cinema to the widest possible audience.  Indeed, you can read more about FAN here .

Donations will be used to support independent cinemas, film festivals and other organisations whose mission to bring fantastic cinema to audiences across the UK is now impossible due to the COVID-19 pandemic.  Many of these small and medium sized businesses are now facing permanent closure. These organisations will range in scale and type but they all share a passion for the best and broadest in UK and world cinema.

These donations will be formally received by The Showroom Workstation in Sheffield (which has charity status as THE SHEFFIELD MEDIA AND EXHIBITION CENTRE LIMITED), an independent cinema and key partner of BFI FAN (the administrator for  Film Hub North, one of its eight Hubs). They will work with all BFI FAN Film Hubs across the UK to channel the funds to where they are most needed.  Again, a BOLD mini-mini moment, The Showroom Workstation will not receive any funding raised by this campaign.  You can find out more about supporting this beloved cinema in Sheffield directly here .

Now, I’ve praised and commented on Mubi on more than one occasion, whether it be going back to their roots or when they introduced the brilliant MubiGO.

But let’s hear something from them on this campaign: 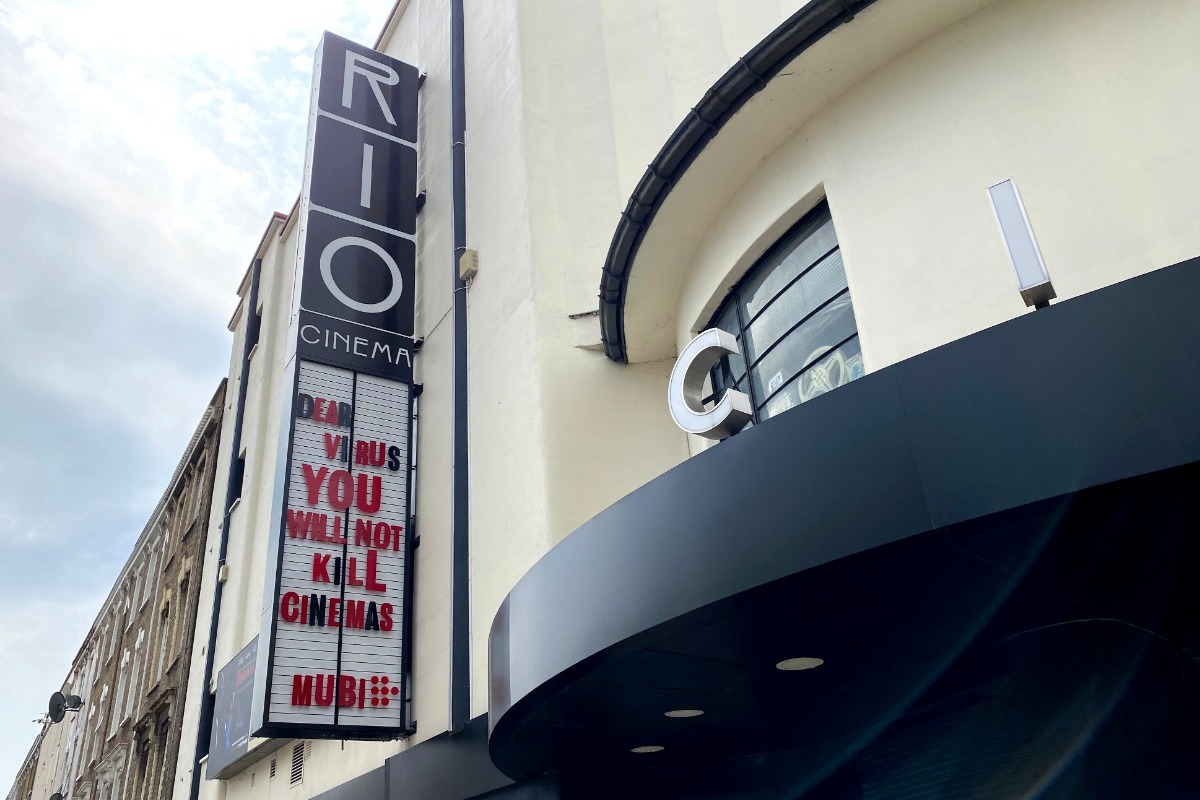 A MESSAGE FROM MUBI

“Cinemas unashamedly provide a proscenium for our dreams” – Roger Ebert

Cinemas and their staff are not just our partners, collaborators, friends; they are the soul of the film industry and we can’t imagine the world without them.

That is why we are launching this campaign to support cinemas in the UK.

We have teamed up with a few London cinemas – the Rio in Dalston, the Phoenix in East Finchley, the Genesis in Whitechapel and Catford Mews – hiring their marquees to display this message in defiance to the virus: you will not kill cinemas. The message for our cinema friends: you are not alone.

If, like us, you are a person who dreams in films, please donate to this campaign to support our cinemas. And soon we’ll meet again, in a dark auditorium somewhere, to dream together.

Help us spread the word about this campaign by sharing it on social media, with friends and family, and with all your comrades in dreams. 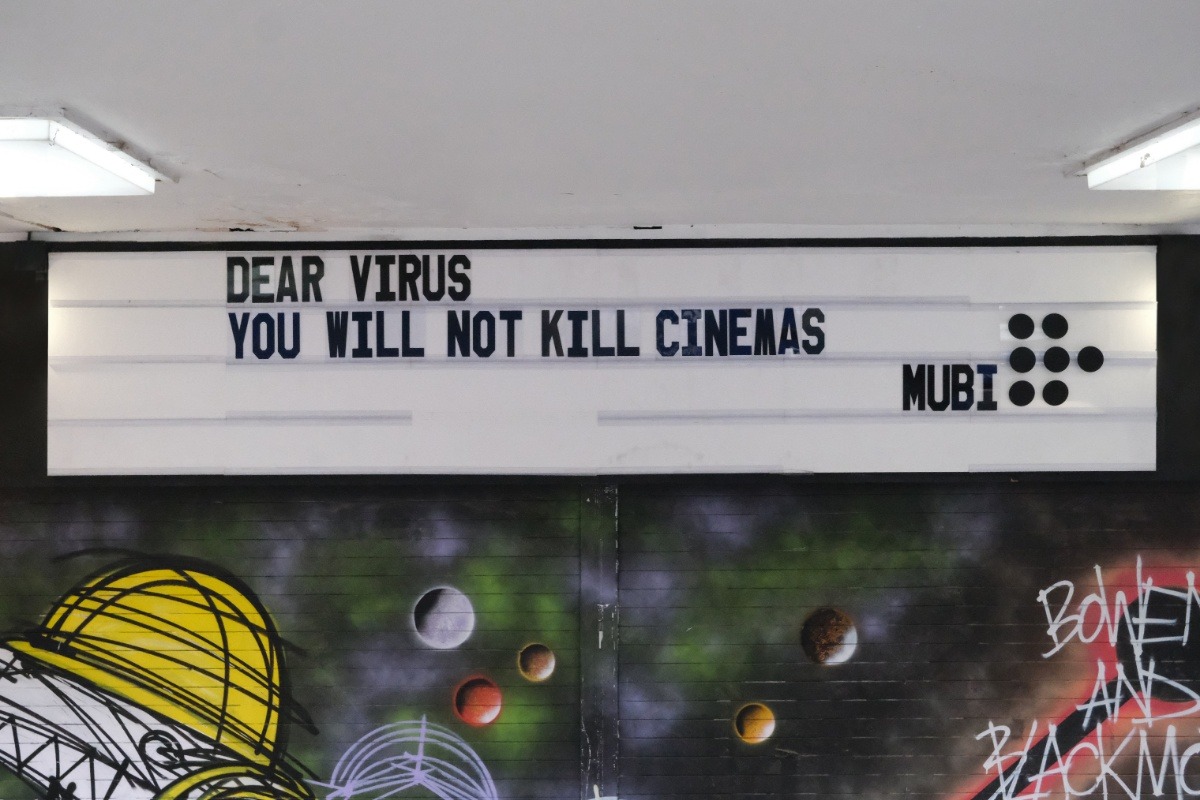 Please share this campaign information as widely as possible – time is critical to help these cinemas and film festivals get through this challenging time.

LASTLY, and on a personal note, I’d like to add to the cinemas already detailed in the above, those being the Rio in Dalston, the Phoenix in East Finchley, the Genesis in Whitechapel and Catford Mews.  Why?  Well, although I love and praise all those (I’ve frequented all but the Catford venue), there are others which also deserve an equalled recognition, and although some of the following LONDON venues will struggle more than others, I feel I must give all a mention anyway.  I’ve included direct links to the venues/cinemas already mentioned in this article too.  The links are:

The Lexi Cinema (in Kensal)

The ICA (in Trafalgar Square area)

BFI Southbank [although they are hopefully coping and have an established online, On Demand service]

Curzon Cinemas [chain – although they are hopefully coping and have quite an established online, On Demand service]

*To Elaborate on That Opening ‘Tagline’:

The ‘plot’ stated and which started this article concerning a time where independent cinemas rule the world, rather than multiplexes was just a rather hopeful wish or pondering.  Imagine though if we could save indie cinemas, arthouse cinemas and other relating film exhibiting venues & film festivals… whilst giant corporations struggle, fail and fold, as a result of this pandemic.

Surely then, real passion projects, talented filmmakers (using their original concepts and scripts – untweaked by huge studios) and the like could be brought to the fore, which, I’d like to think would also result in even more devotion to even more unique venues springing up.  I simply had to add that part as I didn’t want people who live ONLY close to a multiplex or faceless chain to feel as if they’d have nowhere to go.

Well, it’s a lot to ask or wish for but perhaps it could come true if only by praying and uttering – & ending on -the following two words, “Dear Virus…” [although, I’m fully aware that these two words would be the start of the request and not THE END]

Well, almost all.  Another place you can find film reviews [in vlog and podcast form – including a few relating to MUBI, and some of the cinemas listed], other movie related snippets, and indeed examples of Jason Verney’s filmic work is at:

* Filks. A combination of Film and Folks.